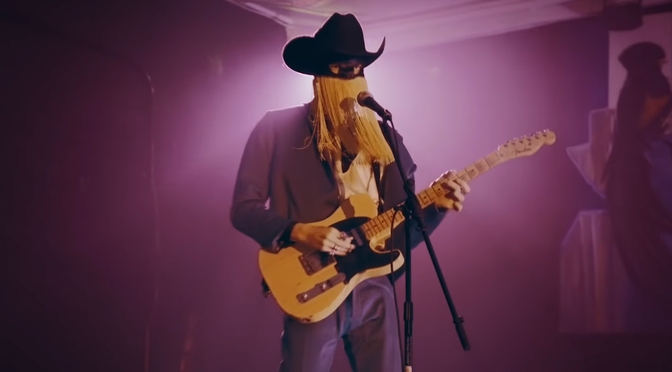 Directed by Orville Peck and Carlos Santolalla. From Pony, out now on Sub Pop.

There’s been a spate of videos with dudes in masks of late, which I guess makes sense in the era of Trump and Brexit. We all have a little something to be ashamed of and perhaps a compulsion to hide from our responsibilities. Sub Pop crooner Orville Peck takes it one further by also masking his influences and genres, and it works like a charm. And maybe it’s not about hiding at all?

Peck recently told The 405, “Masks actually expose a lot—and in this case—allows people to connect way more with me than If I wasn’t wearing the mask. Wearing it lets me stay honest and not hold anything back, if that makes sense. If anything my masks are actually way more exposing than anything.”

Read any other review of his work and you hear a lot of Outlaw Country acts bandied about as musical references, which I guess is true, but I hear something else entirely. What I hear is a Bret Easton Ellis soundtrack. Not the Huey Lewis variety, but one that would play in an indie production of one of his books. There’s a bit of Big Country and Love and Rockets and The The and a whole heaping of Wall of Voodoo. While mining the 80s is in fashion these days, Peck has tapped a new vein. It’ll be interesting to see what else pans out.