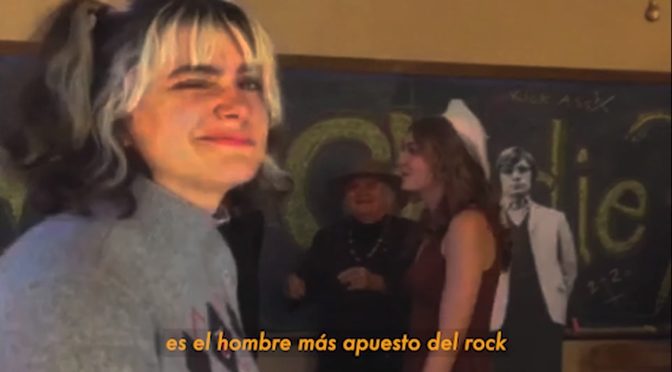 Video: The Exbats – “I Got the Hots for Charlie Watts”

The Exbats / I Got the Hots for Charlie Watts

From Kicks, Hits and Fits, due March 13 on Burger.

The Exbats are a father-daughter duo from Arizona: Dad/guitarist Ken Mclain and daughter/drummer/singer Inez (named after Mike Nesmith, naturally).

“I Got The Hots For Charlie Watts” is the title of their 2018 sophomore album, but the song doesn’t appear on it. And I mean, really, if you come up with a title that great, you might as well use it to its full potential.

And what a great song. Their label describes them as “bubblegum garage punk” which is accurate enough, I guess, but it doesn’t quite convey the ramshackle homemade charm. Kinda reminds me of an early Brian Jonestown Massacre recording.

Ken talked to Punknews: “Swoon for Keith Moon? Check. Flame for Hal Blaine? Check. Hots for Charlie Watts? Check. ‘The old gods have a died, a couple survive. But it’s only echoes, cash from the past,’ but we can’t help a fascination with the titans of rock’s past. And for us, it keeps coming back to the Stones…and The Monkees. The Stones had the attitude and The Monkees had crazy 60’s energy with songs from the great songwriters of the time. Groups like these old timey guys inspire us. And one guy just totally kept his cool through decades of navigating enormous egos, Charlie Watts. He just didn’t give a shit about all the weird stuff going on around him, he just showed up looking great and doing his thing. Driving some of the most badass songs ever played. What a guy, man, he’s the best. Totally unflappable.”