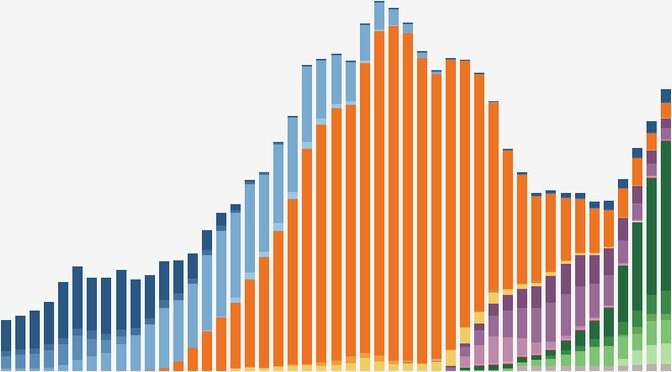 While the growth in streaming services—increasing revenue by 25% compared to 2018 numbers—was certainly significant, there was a real but somewhat subtle decline in “digital and customized radio services” (e.g., SiriusXM and internet radio), down 4% compared to 2018. If one thing goes up 25% and the other down 4%, it is clear that the dynamic is in place: gravity is going to keep that decline going. SiriusXM isn’t flogging its app for any other reason than its acknowledged need to have more commitment than the three-month trials that many new cars come with.

What is perhaps most interesting in all of this is what is happening vis-à-vis ownership vs. listenership, with the latter being the salient characteristic of streaming.

To provide context to 2006: that was the year of such cuts as “Crazy” by Gnarls Barkley and “Dani California” by the Red Hot Chili Peppers. And on February 22, not long into the year, the billionth song was downloaded on iTunes, “Speed of Sound” by Coldplay. Seems like even a longer time ago, doesn’t it?

Then there are the objects themselves that contain music: discs. The good news is that the sales of physical media were down just 0.6% in 2019. Yet at a total of $1.15 billion, discs account for just 4.5% of total revenues.

And were it not for the renewed fascination with vinyl, things would have been much bleaker for that category, as vinyl sales were up 19%, accounting for $504 million, while CD revenues were down 12%, to $615 million.

One of the things that always puzzled me was the comedy album. You listen to the disc a couple times and after that there is no surprise. And a surprise is a key part of a joke. So what is the likelihood that there will be a fourth or fifth replay?

Music, on the other hand, is different inasmuch as each time you listen to a piece your conditions are different so that you are likely to “hear” it a different way, even though you may have it so embedded in your synapses that were there to be even the most minuscule change (e.g., imagine that someone snuck in and replaced your disc with another one that was exactly the same except for a few notes difference) you’d know it was off. You could play a music disc 100 times and each time would bring variance.

And then there is the act of physical ownership, the decision that this one needs to be owned, needs to become part of a collection, needs to be something that is seen.

This isn’t an issue of spending money, because the RIAA numbers show that recorded music revenues were up 13% in 2019, to $11.1 billion.

No, people are spending a lot for music. They evidently just don’t want to have it.

4 thoughts on “The End of Ownership: Material Gives Way to the Ephemeral”