Kid on the album cover now in the band!

Kid on the album cover now in the band!

by Sugarcubes Forever
WTF? That's one strange bit of rock lore if it's true.


Smashing Pumpkins frontman Billy Corgan has revealed via Twitter that his current bass player Nicole Fiorentino -- who joined the band only last year -- is no stranger to the band's back catalogue, having graced the cover of one of their albums.

Fiorentino had said she is one of the cherubic pair from the band's famous (and some would argue best) album, 1993's 'Siamese Dream.' (That's her on the left, apparently.)

The former member of Veruca Salt and Spinnerette joined the Pumpkins as a touring bassist before being made a full-fledged Pumpkin last year and, according to Corgan, decided to keep her odd connection with the band a secret so as not to jeopardize her chances.

by Sugarcubes Forever
not the first time that album cover has made the news.... Back in 2007 Corgan was looking around the intertubes hoping to figure out who the girls were.

We've gotta get the GloNo mythbusters on this one!
by jonas
If true, pretty damned cool.
by Sugarcubes Forever

I have a sneaking suspicion that it's just a joke that got tweeted by good old Bily and then the twitter-verse took it and ran... Photos of Nicole signing a copy of Siamese Dream don't help. 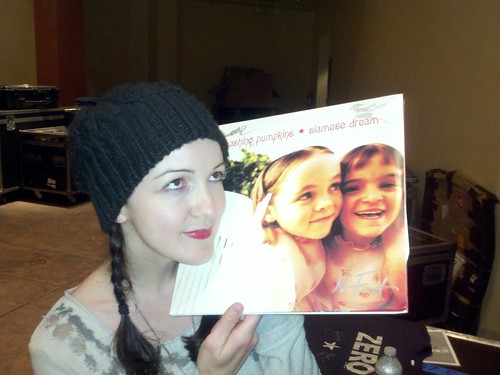 (great band, btw. much better than the smashing pumpkins.)
by Sugarcubes Forever

(great band, btw. much better than the smashing pumpkins.)

Nicole was actually 13 when siamese dream came out. She wasn't an original member of veruca salt. I think Nicole joined Veruca Salt in 2006.

She sounds pretty cool on the new Pumpkins song. She does backing vocals.
by Jake
I thought Corgan admitted this was just a hoax.
by Sugarcubes Forever

Jake wrote:I thought Corgan admitted this was just a hoax.

they were joking back and forth between each other on twitter (billy and nicole). It immediately got picked up by online media rags and sort of blew up.

The other day, Billy actually joked about it again. While he doesn't have a millions of twitter followers like some of the current pop stars, those that do follow him tend to jump all over any weird thing he says.
All times are UTC-04:00
Page 1 of 1