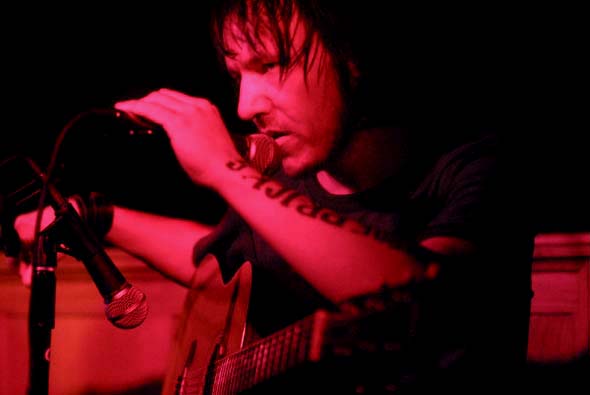 Elliott Smith is giving Warren Zevon a run for his money. Or is this just the second time I’m highlighting work by Elliott Smith? Either way, you can expect more. This one will be the most painful. The year was 2003. I had just arrived at my hotel in York, England (business trip). I called my then wife to check in now that I was at my destination. She told me Elliott Smith had killed himself. Stabbed himself – twice – in the chest. I distinctly remember having a physical reaction to this. I was lying on the hotel bed, with my legs hanging over the edge, my feet on the ground (bed was low, I know). I felt like my heart skipped a beat, and had a sudden rush of… adrenaline or something.

Elliott Smith!? Dead!? He’d barely just begun. One of the greatest songwriting voices around at that time. At least I’d gotten to see him a handful of times in New York, and was able to appreciate his talent before he died. Thankfully for all of us, there are about 95 Elliott Smith shows currently available on the Live Music Archive. What follows is a selection of tracks from his final year, 2003. What a loss.

2. Elliott Smith – “Coast to Coast”. This is one of my favorite songs from Basement on the Hill. Fucking awesome. It’s a lo-fi audience recording, too, but it’s a full band this time. This particular show has been downloaded over 19,000 times. Full show: May 28, 2003 – The Derby, Los Angeles, CA

3. Elliott Smith – “A Distorted Reality Is Know A Necessity To Be Free”. Demonstrates how vulnerable he was at this time. The audience is deadly quiet (after the banter and a few false starts at the beginning, anyway). Full show: May 22, 2003 – Belly Up Tavern, Solana Beach, CA

You can find earlier coverage of Elliott Smith’s work on Five For the Archive here.