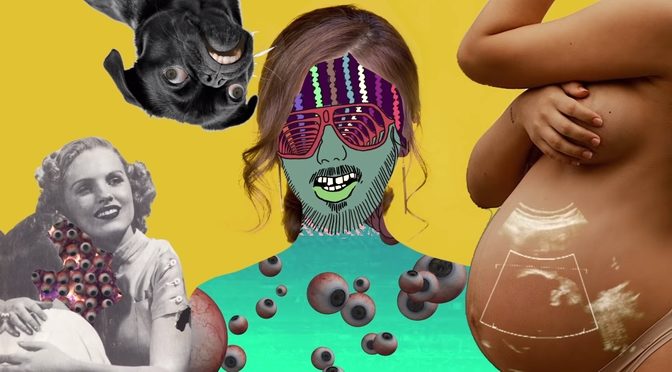 Badly Drawn Boy - Is This A Dream? (Official Video)

Directed by Broken Antler. Single out now on AWAL.

First new Badly Drawn Boy song in several years. And it sounds…highly compressed and terrible. Maybe it’s just YouTube but the mastering gives me a headache before the end of the video. (Update: the version streaming on Apple Music sounds slightly better.) Which is a shame because the song is a scootin’ little ditty about our current dystopian reality.

Welcome to the tragedy
It’s not the way it’s supposed to be, I know

The video is an appropriately psychedelic collage of absurdities. The whole thing is a lighthearted take on a subject that’s easy to be sour about.

Like a lot of Americans, I was introduced to Damon Gough’s music via a Christmas 2000 Gap ad. It’s hard to imagine now, but twenty years ago the use of good music in television commercials was a cause of great consternation. We were very concerned about “selling out” back then, which might seem quaint and naive today, but it used to be a very big deal. Volkswagen had made waves earlier in the year by using sadsack sacred cow Nick Drake’s “Pink Moon” in a spot for its Cabrio.

My generation of rock snobs suddenly realized our people had infiltrated the big ad agencies. Those of us who still identified more with Ethan Hawke’s character in Reality Bites assumed that these corporate stooges were all a bunch Ben Stillers intent on cashing in on the coolness we had cultivated so carefully. (It would be a long time before we accepted the biting reality that Troy Dyer is equally if not more douchey than Michael Grates… Either way, Winona forever!)

But I’m thankful to the young professionals at Modernista! for turning me on to Badly Drawn Boy. Glad he’s back…and let’s all hope he gets on the right side of the Loudness Wars.

END_OF_DOCUMENT_TOKEN_TO_BE_REPLACED

“Year of the Rat” by Badly Drawn Boy off One Plus One Is One. Via Fingertips.

2000 witnessed Badly Drawn Boy’s quiet takeover of the world. And Damon Gough seemed just as surprised as anyone. “Hour of the Bewilderbeast,” his debut release under the BDB moniker, quickly conquered the fickle English press, and went on to take home that year’s coveted Mercury Prize. His music even made it into a Gap ad. It was easy to hear why. Gough’s long-form audio love letter to his lady seemed to babble out of the ground like an untapped spring in a bucolic mountain hideaway. But it wasn’t all fluffy sheep and sunny days. Mixing into Badly Drawn Boy’s stream of pop consciousness were deeper currents that suggested the roguish qualities of Gomez or maybe a less-amped Verve. And reports about his erratic, sometimes awesome live shows suggested that behind Gough’s shuffling, bearded exterior was a tightly-wound eccentric with quite a bit more to offer.

Gough’s back to prove it in 2002 with two releases. “About A Boy” is a ten-song cycle built around the film of the same name, which is in turn based on the book by Nick Hornby. Hornby, you’ll recall, is the novelist with a music fetish whose “High Fidelity” was turned into a movie starring Jon Cusack. But let’s get back to Gough. In her NME article concerning “About a Boy,” Victoria Segal describes Badly Drawn Boy’s downtempo antics as such: “[BDB] has taken the adjectives ‘melancholy’ and ‘bittersweet’ and ruined them for any other band.” Whew. A Bittersweet Symphony, indeed. But it’s true. Gough’s literate little love songs arch between the bleeding heart pop ditties of Travis and, well, the melancholy of Nick Drake. Imagine an overexposed Polaroid of a sunny day at the beach, and you’re getting close. By all accounts, Gough’s music for “About A Boy” continues in the same vein. It’s scheduled for a 4/23 release, but you can download the first single now.

According to www.artistdirectrecords.com, Gough’s other project is a full-fledged album currently being recorded in Los Angeles with producer Tom Rothrock, best known for his work with Beck and – what do you know? – Elliot Smith. In fact, Artist Direct Records has just signed a three-album licensing agreement with XL Recordings, Badly Drawn Boy’s UK label, for the domestic rights to BDB. This is a big step for the American startup, whose biggest act to date has been Everlast soundalike Custom. But the label is undoubtedly watching the continued success of Coldplay (as well as renewed US interest in Oasis), and licking their chops over the possibility that Badly Drawn Boy’s new material will break like “Bewilderbeast” did in the UK in 2000. And it just might. Increasingly, we are seeing a break from habit in American taste. After the success of “Crouching Tiger, Hidden Dragon,” subtitled long shots like “Brotherhood of the Wolf” and “Y Tu Mama Tambien” are receiving widespread – and successful – distribution. In music, the left-field success of Moby’s Play, as well as music industry square pegs The White Stripes, Jack Johnson, and Musique Soulchild suggests that the climate is right for music that’s not this or that – but the other – to make the money makers more money.

In the meantime, if you haven’t already, listen to “Hour of the Bewilderbeast.” And hug a pal.