Let’s put politics aside for a moment and just appreciate that this guy is smooth. Years after Clinton squawking away on a sax and eight arduous years of Bush trying to dance (or whatever that is), we finally have a President with at least a hint of musical acumen.

Making the rounds this week is the President singing some Al Green, which is awesome enough. But it’s not the first time The Crooner in Chief has put his pipes to the test. Dig his repertoire.

My President is Black, in fact he’s half white

So even in a racist mind he’s half right

Even in these racist times we alright

My President is Black but his house is all white

Barack Obama ran so all the children can fly

END_OF_DOCUMENT_TOKEN_TO_BE_REPLACED 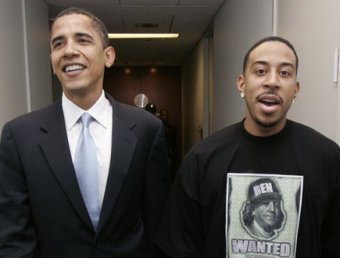