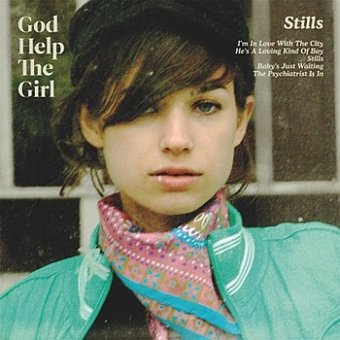 In order to promote the digital release of their new Stills EP, God Help The Girl is giving away the title track. No direct link to the MP3, but if you follow the “Download” link below and give them your email address and zip code, you’lll be given the option to download the song in variety of formats including 320kbps MP3, FLAC, and Apple Lossless.

Belle and Sebastian‘s Stuart Murdoch has been working on this project for years, and the album was excellent. Judging by this freebie, the EP will be on par. And I’ll be damned if Murdoch does not have the best taste in cover stars—where does he find those girls?

“This is not the usual five duffers that didn’t make the album,” says Stuart. “It just happens to be the tracks that Catherine, Celia and Alex sang that were less relevant to the film project, so I wanted to put them on a separate release and let the LP follow the curve of the proposed film.”

In related news, a new Belle and Sebastian record will “most likely” be released “during 2010,” and filming on the God Help The Girl movie “should get properly underway in 2011.” 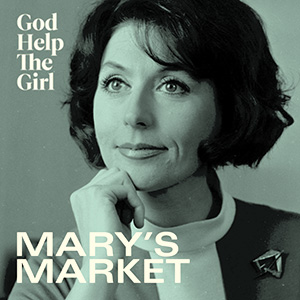 A couple of new MP3s from Stuart Murdoch‘s God Help the Girl project:

“Mary’s Market” is the b-side to the “Funny Little Frog” single and features vocals by Murdoch. The a-side is a cover of the Belle and Sebastian song with vocals by Brittany Stallings. The 7″ is due July 20 in the UK.

God Help The Girl is a musical film written by Stuart Murdoch of Belle and Sebastian. The album of songs from the film is due June 23 on Matador with a total of nine different singers (including Neil Hannon from the Divine Comedy and Asya from American teen trio, Smoosh) joining the members of Belle and Sebastian over the course of a few months of recording in Glasgow.

If you’re willing to enter an email addres, you can download the first single, “Come Monday Night,” sung by Catherine Ireton at the album’s website. It’s as lovely as you’d expect.

Belle and Sebastian with New Pornographers

When I heard about this tour I assumed it was going to be set up as a sort of co-headlining affair. For whatever reason, I had thought both bands had achieved a fairly equivalent stature. Goes to show how accurate my “scene radar” is.

The New Pornographers were clearly just the opening band.

END_OF_DOCUMENT_TOKEN_TO_BE_REPLACED

For better or for worse, the Belle & Sebastian of your older sibling’s college days are long gone. The elegant lo-fi tweeisms have given way under an avalanche of sugary-sweet power pop. Take the blind test, and you could easily mistake The Life Pursuit for a New Pornographers album.

Not even the group’s previous release, Dear Catastrophe Waitress, can prepare listeners for what The Life Pursuit offers. Stuart Murdoch has proven his worth as a songwriter in the past, and on Waitress he began to adapt his skills into new terrain for the Scottish group.

END_OF_DOCUMENT_TOKEN_TO_BE_REPLACED

“Another Sunny Day” by Belle and Sebastian from The Life Pursuit, due February on Matador. Via Fingertips.

“Take Your Carriage Clock And Shove It” by Belle And Sebastian’s from Push Barman To Open Old Wounds, a 2-disc collection of all seven Jeepster EPs.

Belle and Sebastian Captivates the Crowd at the Congress Theatre, Chicago

The last time I saw Belle and Sebastian perform was at their U.S. debut at the College Music Journal (CMJ) Festival in New York in September 1997. Performing at an old synagogue in Greenwich Village, the troop was a timid group of kids from Scotland, who despite remarkable talent as artists and musicians, seemed a bit unsure of themselves as performers. At Saturday night’s performance at the Congress Theatre in Chicago, part of Belle and Sebastian’s second-ever east coast tour [since when is Chicago the east coast? – ed.], they demonstrated significant growth as performers and put on a show equaling their beautifully-crafted music.

Belle and Sebastian’s first album, Tigermilk, originally only released on vinyl, was produced as a project for a music business class in early 1996. Since that time, this pop ensemble from Glasgow has released 4 LPs and 6 EP/singles, created the musical score for Todd Solondz’s recent film Storytelling, accumulated a massive cult following, and become one of the most inspired musical groups of the twenty-first century. Rather than buckling under the weight of these achievements, Belle and Sebastian have embraced their rise in acclaim and have developed into a team of extraordinary performers as well as artists.

At the Congress Theater, Belle and Sebastian put on a true performance of the kind that is rare among contemporary four-piece pop music. Making up Belle and Sebastian’s extensive cast are Stuart Murdoch, Stevie Jackson, Sarah Martin, Chris Geddes, Mick Cook, Richard Colburn, Bob Kildea, and Isobel Campbell (who unfortunately stayed home this tour), and an entourage of back-up musicians, including a full violin section. Five years ago at the CMJ show, vocalist and front man Stuart Murdoch was a shy poet-singer who had a hard time remembering his own lyrics and seemed a bit intimidated by the crowd. By contrast, Stuart entered the stage Saturday night sporting a Cubs hat and jersey, in honor of the Chicago crowd, and demonstrated a control of the crowd that only a few possess.

And yet, despite his impressive development as a performer, he has lost none of the humble and unassuming quality presented 5 years ago. To win over his audience, he needed no showy pretense or gaudy showmanship but merely a natural ability to connect with the crowd. Like the fitting line from “Too Much Love” – “But underneath I am the same as you” – during which he pointed at several audience members, he came across less a rock star than as one of us. Stuart could be the guy next door or an old friend from school you’d grab a beer with on Saturday night. His eyes seemed to twinkle in response to cheers from the crowd, and he encouraged audience participation, pulling a couple of girls on-stage to help out during the opening number and turning the microphone over to group near the stage during another number. Demonstrating the fuzzy line between audience and performers, Stuart encouraged an on-stage wedding proposal by an audience member. The newly engaged couple (she accepted of course) was invited on stage for a song, after which Stuart shook their hands and kissed the bride-to-be on the cheek. Throughout the show, the audience responded to the performance as they sang, danced, and clapped along to poppy numbers, such as “Judy and the Dream of Horses,” but fell utterly silent during a lovely performance of “You Made Me Forget My Dreams.” The human quality of the performers in the context of their elaborate and tightly executed performance made the show wonderfully engaging.

Especially for the windy city, Stuart and singer/guitarist Stevie Jackson broke into an impromptu and humorous rendition of Chicago’s “If You Leave Me Now,” leading Stevie to comment “it’s as if punk never happened,” which was not far from the truth Saturday night, as Belle and Sebastian’s melodic pop harkens back to 60s pop and folk music. With complex musical composition and truly poetic lyrics, Belle and Sebastian weave songs that are much more substantial than the average pop/rock tunes we typically hear. To prove they have some rock and roll in them, however, they closed the show with a cover of “The Boys are Back in Town.” In a rare and admirable gesture, Belle and Sebastian declined to play an encore, and though many may have been disappointed, I thought it showed an unusual integrity. Stuart aptly stated during the show, “We usually do something a little different,” and Saturday’s performance was definitely something a little different.