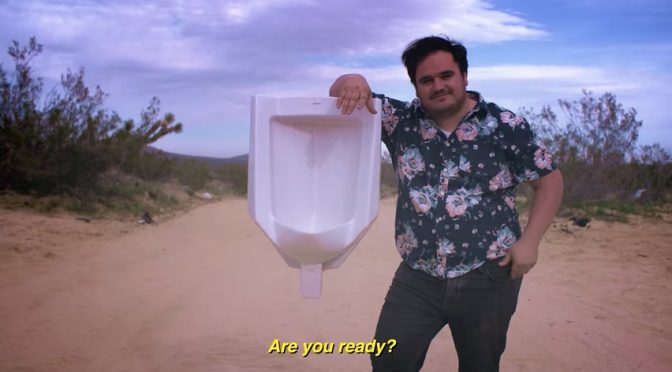 Let me pitch this concept to you: We open with a toilet in a recording studio scatting (get it?) and beat boxing, but his/her baghead record producer just isn’t feeling it.  They decide to take a break and go to the bar where a gang of other bagheads are dancing and drinking the night away. Our hero, the toilet, spies a sink from across the room and is lovestruck. They dream of explosions and a weird Kabuki princess, who tries the toilet on for size before he/she sets off for the desert to meet some wise urinals who tell him/her to chill and just accept the poo/pee humans have to offer. Our hero, the toilet, then hitches a ride with the urinals’ man-about-town, Bud, back to the city, but not before Bud takes a piss in our hero, the toilet. By the end, we’re back in the studio with baghead producer really digging on our hero, the toilet’s improved scat (get it?) performance.

Produced by Joe Chiccarelli with Nyles Spencer and mixed by Shawn Everett, Hug Of Thunder is out now on Arts & Crafts. Buy the physical album or the digital album.

Tour dates after the jump.

END_OF_DOCUMENT_TOKEN_TO_BE_REPLACED

The cruel irony here is that most people recognize Jason Collett from his tenure with Broken Social Scene rather than the material he’s done on his own. So those looking for a taste of the Scene’s bombast and indie rock leanings may be taken aback by Collett’s everyday persona of stripped-down Americana that’s all over his fourth solo disc Here’s To Being Here.

So prepare yourself for an album full of rustic charms, plainly delivered under an obligatory Dylanesque phrasing. And don’t expect a lot of them to be easily recalled after you’ve spent an hour or two away from them.

END_OF_DOCUMENT_TOKEN_TO_BE_REPLACED

“Puff the Magic Dragon” by Broken Social Scene from See You on the Moon: Songs for Kids of All Ages. A nice, dreamy cover of one of my favorite songs as a kid. It’s really a hopelessly sad, sad song: “A dragon lives forever, but not so little boys…” Via lhb.

What becomes of a band after arriving, seemingly out of nowhere, with one of the most touching, ambitious, and jaw-dropping albums of the decade? Do they quit while they’re ahead? Do they try to re-create magic and fail horribly in the process? Do they forge ahead and emerge victorious, creating an opus that causes infinite sunshine and children running through the streets? No. They… release a b-sides album?

Kevin Drew, one of Broken Social Scene’s two core members, claimed at one point that the idea of a b-sides album “didn’t sit well with us,” yet through different circumstances the band wound up recording songs in small bunches and found a similar nature running through them all. These songs eventually became Bee Hives.

The nine tracks range in origin from as early as pre-You Forgot It in People to the second half of last year, and they serve as a map of where Broken Social Scene has been through two albums. Mostly instrumental, Bee Hives isn’t comprised of songs as much as sounds like the band’s first release, the organic bedroom electronic Feel Good Lost. The atmosphere, however, is almost entirely influenced by Forgot, layering guitars and waves of static over pounding drums in millennial, sun-kissed arrangements. Drew and Brendan Canning, with their endless list of collaborators, find a way to push the boundaries of what can be considered “pop” even further on Bee Hives; the result is something that is familiar with Dntel and Manitoba’s latest releases, but still sounds only like Broken Social Scene.

“Marketfresh,” from the “Cause=Time” single, is the only sign of Canning’s breathy vocals. It rolls over the horizon like a fog, only breaking long enough for Canning to rebut, “I could have meant it if you let me / I’m frozen.” It’s Bee Hives‘ shining moment, including the self-proclaimed “lo-fi anthem” “Backyards,” which features labelmate Emily Haines (of Stars) on vocals; this track bears resemblance to Forgot‘s “Anthems for a Seventeen-Year Old Girl.” Whereas “Anthems” picks up steam over the course of the song’s duration, “Backyards” flies out of the gate and never looks back.

Bee Hives ends with an alternate version of Forgot‘s “Lover’s Spit” taken from a UK radio session. This version, sadly, doesn’t live up to the album version; this can largely be attributed not to the lack of Canning’s Buckley-esque strains. Otherwise, the song remains true to the album cut, its steady drumming and enveloping piano lead giving way under a graceful string arrangement at climax.

So really, the only fault to be found with Bee Hives is its lack of identity. Its continuity in atmosphere and mood certainly lends itself to that of a proper follow-up, but this isn’t the last we’ve heard from Broken Social Scene. Their latest release shines, but Bee Hives is just a pause at a stop sign; by all indications Drew and Canning are prepared to take the challenge of following up You Forgot it in People head on. I, for one, cannot wait.

Broken Social Scene – You Forgot It In People (Arts & Crafts)

What do Manitoba, Grandaddy, Stephen Malkmus, The White Stripes, Prefuse 73, Ted Leo and the New Pornographers have in common? They’ve all released albums in 2003 that represent an outstanding ability to write, perform, and record music. What else do they have in common?

None of their great ’03 releases even come close to You Forgot It In People.

Broken Social Scene, a blender full of Canada’s finest bands (Do Make Say Think, Treble Charger, etc.), have arrived—very quietly at first—with the album of the year. This beautiful mess of genres that all come together for thirteen tracks of jaw-dropping wonder was released in obscurity and now finds itself immersed in hype. There is a good reason why, too. If you look through some of the criteria that make a good album a great album, you’ll find You Forgot It In People does pretty well for itself:

• Production. David Newfeld manages to rope in the ten different members of Broken Social Scene (and their guests) and keep everything from becoming a mess. There are sounds everywhere, but the production is so big and colorful that you hardly notice how many people play on one song.

• Repeatability. You Forgot it in People is enjoyable at first listen, impresses at the second, and starts to stagger you at the third. After listening to this album for a while (days on end, occasionally), it never tires. And with all of the aforementioned music being played at once, there is something revealed with each listen.

Each piece of each song, each performance, is tiny. But it’s the sum of all the parts, all of the guitars being layered and vocal tracks and other sounds that add up to the big finish.

I’ve been trying to think of a way to describe this album. You Forgot It In People is the sound the sun would make in a room of mirrors while its rays perpetually bounce back and forth. But the best description of this album is the first thing that runs through my mind when I think about it: