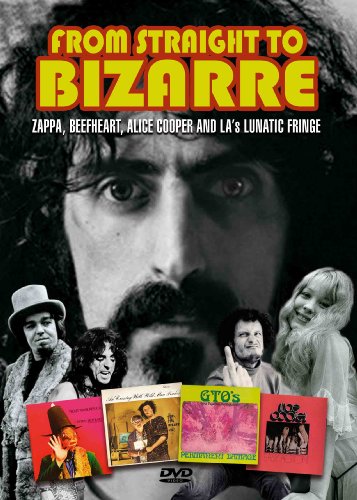 Going back to the first time I ever heard Captain Beefheart’s Trout Mask Replica, I remember wondering, “What is going on here?”

The second thought immediately following this was “Who on Earth would release this?”

Even today, Trout Mask Replica stands out as a left-field landmark, an impressive opus that may not sound like a masterpiece upon first listen, but its creative seeds begin to plant themselves immediately afterwards causing each subsequent listen to reveal an additional layer of complete brilliance.

So it goes without saying that the record company that had the impossible foresight to allow such a document to grow to fruition must most certainly be run by a special person.

The label was originally called Bizarre and it eventually transformed into Straight Records. The men responsible for these forward-looking labels were Frank Zappa and his manager Herb Cohen. Together, they drew up a contract with Warner Brothers for Zappa’s material, and they secured a vanity label with the company so that Frank and Herb could offer artists an outlet for their creativity. 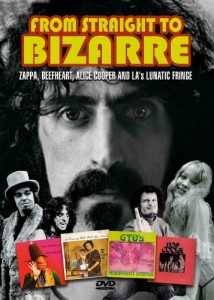 From Straight To Bizarre: Zappa, Beefheart, Alice Cooper and LA’s Lunatic Fringe chronicles the origins of Zappa and Cohen’s record company all the way to its ultimate collapse amid bad feelings and obligatory lawsuits. It’s recommended to any fan of Zappa or Beefheart that’s interested in learning more about this very creative time for both of them and the strange business plan that Zappa hatched in turning documents of L.A.’s self-described freaks into recording stars.

What’s striking is how patient Zappa seems to be with these people, some of whom have clear mental issues that far outweigh any attempt at assisting their artistic endeavors. Others are just plain opportunistic, part of the scene because they invited themselves and invented a second-life persona that was either hiding their real history because of how awful it was or how bland it looked on paper.

For some reason not explained on film, (none of the interviews presented in this feature Zappa) Frank felt these enigmatic characters deserved documenting. He began on a quest to transform a paranoid schizophrenic named Wild Man Fischer who spent his days selling his stream-of-questionable-consciousness songs for a dime, essentially panhandling his lunacy for tourists and passers-by.

For most of us, these characters are minor annoyances on our way to work, but to Frank, Fischer was part of the landscape of this social freak culture he was attempting to document. Fischer thought he’d sound like the Beatles when Frank finished, but when Zappa presented an album with not only Fischer’s primitive compositions, but his crazed existence in the form of field recordings, he got mad.

The Wild Man–true to his name–flung a flower pot too close for comfort at the head of a very young Moon Unit Zappa, trying to process how An Evening With Wild Man Fischer wasn’t as big as Meet The Beatles.

After that event, Fischer was never allowed in the Zappa house again and his debut record has never been re-released to this day because of bad feelings. I verified this online where the lowest priced copy of An Evening With I found on a recent scan of eBay (VG rating) had a starting price of $20 with better quality copies ranging from $50-$100.

The GTO’s get ample screen time on From Straight To Bizarre with Pamela Des Barres and Miss Mercy spouting on about meaningless stories of getting high with the Magic Band and defining what exactly constitutes being a groupie. Out of all of the label’s releases, the GTO’s Permanent Damage may stand as the most unnecessary record ever made, but according to the film, Zappa tolerated their limit talents and unprofessional behavior in the studio.

Thankfully, a great deal of time is spend on Captain Beefheart’s Trout Mask Replica and the power that he exerted over the band during this period. It’s clear from Magic Band members John French (Drumbo) and Bill Harkleroad (Zoot Horn Rollo) that the Captain initiated a regime of cultdom that French later referred to as “Masonesque.”

You get the sense that Zappa himself was aware of this treatment, yet gave a wide birth between being concerned with their welfare and allowing his old friend Don Van Vliet to have what he wanted most: total creative freedom. In his defense, Zappa did give the Magic Band a hot meal every so often out of pity.

During the period where they were considered a band, Alice Cooper also maneuvered into a contract with the label based on an audition that Vince Furnier misheard to take place at nine in the morning at the Zappa cabin in Laurel Canyon instead of Frank’s preferred time of nine in the evening.

Frank also caught an Alice Cooper gig that witnessed half the audience leaving in disgust, which meant that Zappa simply had to agree to sign them based on principle alone. By the time of their third album Love It To Death, the band had finally found a new producer who captured their essence into a palatable offering, led by the enormously successful “I’m Eighteen.”

With that record in 1971, the logo of Straight Records was all that was left before the Zappa/Cohen project was phased out of discussion along with Zappa’s own contract with Warners.

I haven’t even touched on signings like the a capella gospel vocal group The Persuasions, Tim Buckley’s Starsailor release, as well as Mother’s member Jeff Simmons’s solo album. They’re all included in the discussions during From Straight To Bizarre, which makes the film a bit heavy at over two-and-a-half hours in length.

You may get a bit winded by all of the talking heads throughout the feature, helping to assist in the film’s girth and you may get very sick of the original musical music they use each time the conversation focuses on Beefheart. There are samples of some of the label’s artists, but as a matter to save money, the producers must have bargained a lower number to someone familiar with Beefheart’s repertoire to come up with a cheesy facsimile.

Cheap tactics aside, the film does prove to be a good reference point for any up-and-coming Zappa fan looking to see how far his influence extended into the late sixties. It’s also a nice document of one of the most successful avant-garde record companies that ever benefited from a major record label and a reminder of how different the system was when it came to harvesting talent beyond the pool of commercial ambition.

Note: Amazon pulled its listing for some reason (Google cache) but you can still order it from MVD or Chrome Dreams UK.

There’s no middle ground with Captain Beefheart, so this review is for those who have already taken the big leap into the man’s polarizing body of work and are looking for the next step.

The assumption here is that you started with Trout Mask Replica, the massive document captured by Frank Zappa that’s perceived to be Beefheart’s crowning achievement. That perception is debatable, but I won’t argue its brilliance and I won’t fault anyone who chooses it as their first ride on Beefheart’s off-the-map journey. It’s the first Beefheart album to capture his off-center compositions, a train ride that’s piloted by an engineer under the influence of tainted moonshine and too many Howlin’ Wolf and Ornette Coleman records.