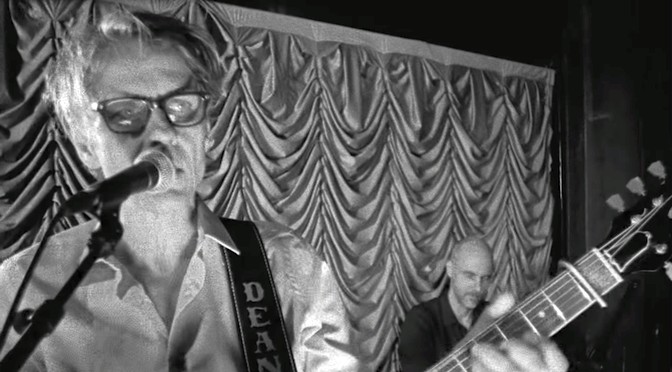 From A Sentimental Education, due September 22 on PledgeMusic/Double Features Records.

My favorite era of the Cure is the Three Imaginary Boys period before they incorporated synths. They were just scrappy young punks with a clever sense of melody. Their gloomy stuff is great too, of course, but I drove around for an entire year of high school with a tape of Boys Don’t Cry stuck in the cassette deck of my Cutlass Supreme (with Love and Rockets’ Earth•Sun•Moon on the flip) and never got tired of it. While never showcased as a single, “Fire in Cairo” is a highlight of that era.

Luna is the band that Dean Wareham started after leaving Galaxie 500. They’re a 90s band, but they got back together a couple years ago to tour and record an album of covers. Their take on “Fire in Cairo” sticks pretty close to the original arrangement but the tone of the guitars and Wareham’s vocals make it sound like classic Luna.

The video follows Rose McGowan around as she goes about her day, hanging with friends, admiring fan art drawings, taking in a rock show at Gold Diggers, doing interviews, etc. It seems to suggest a commentary on the loneliness of aging, but that might just be me projecting my own feelings onto it.

Via Slicing Up Eyeballs.

END_OF_DOCUMENT_TOKEN_TO_BE_REPLACED

Roger O’Donnell, the keyboard player for the Cure during the recording of Disintegration twenty years ago, shared all of his memories and lots of photos from the recording of that album. It’s a great read, full of fascinating details—who would’ve guessed the Cure was into clay pigeon shooting and 4×4 vehicles!—that dispel a lot of myths surrounding the group:

So to answer another question no, the mood didn’t change in the studio when Robert started singing, it was exactly the same very happy and jokey. Lots of laughing and fooling around, I was there for all of the vocal takes and I dont remember anyone breaking down or being overcome with emotions. It sounds very dramatic and probably fills out some peoples fantasies of what the band is like but its just not true. We are all very English, The Cure is probably one of the most English of groups you could imagine, the closest we got to showing emotion to each other was saying “good morning”.

It’s been a long time since I’ve busted this album out, so maybe its twentieth anniversary should be a sign that it’s time to remind myself of one of the worst summers in my life, when I sat in my bed room and played this album on repeat for weeks on end. But I’ve told that story before. Anyway, go read O’Donnell’s essay. He even shares his original demo of the songs that would turn into “Fear of Ghosts.”

Via slicing up eyeballs.

END_OF_DOCUMENT_TOKEN_TO_BE_REPLACED

It’s hard to remember that the Cure has been around since the 70s. Had they split up after 1989’s Disintegration, they’d be hailed as the most important alternative band of the 80s. The Cure’s influence on 90s alt-rock makes even the Pixies seem like, well, a band that never influenced anybody. But before the Cure found their calling as pioneers of synth-heavy mope rock with long, noodley intros, they were a quirky pop-punk band. A three-piece even! That incarnation of the band did not last very long one album and a handful of singles are all we’ve got from that era.

Three Imaginary Boys was never officially released here in the States; we instead got Boys Don’t Cry, a classic collection of the early singles combined with the best album tracks. If you’re only familiar with Boy Don’t Cry and have never heard the original, you might be disappointed by the handful of original songs that didn’t make the cut&#8212″Another Day,” “Meathook,” and “It’s Not You” are far inferior to the a-sides that replaced them: “Boys Don’t Cry,” “Jumping Someone Else’s Train,” and “Killing an Arab.” Three Imaginary Boys‘ Hendrix cover, “Foxy Lady,” sung by bassist Michael Dempsey, is a goofy mess, and the original hidden instrumental, now titled “The Weedy Burton,” is a throwaway lounge trifle. (The best non-Cry song, “Object,” was actually a bonus track on the cassette but was left off the 1990 cd reissue.)

The second disc in this new Deluxe Edition annoyingly places barely listenable live tracks and forgettable demo versions alongside classic singles and decent outtakes. What’s really frustrating about Disc 2 is what it doesn’t include. Where’s “Killing an Arab”? Where’s “Plastic Passion”? At least the latter was included on the Join the Dots box set, but the exclusion of “Killing an Arab” is utterly inexcusable. It was their first single! And it’s about Camus’ The Stranger, for crying out loud, so only a complete barbarian would perceive any racist sentiment in it. Other period b-sides would be preferable to the mediocre-audio demos, but I can respect that you wouldn’t want to penalize fans who shelled out the dough for Join the Dots. But why not gather the fantastic Peel Sessions?

Oh well, you can’t get everything you want, and the quality of the first disc more than makes up for the gripes about the second disc. The remastering sounds excellent, and the songs are really great! Sure, a lot of the guitars sound cheap and tinny. They were. This is the sound of a young band trying to figure out what they want to be. And they never sounded better.

Curiosa at the Tweeter Center

I really only wanted to see the Cure. I’ve been listening to them since, when? 1987? so it seemed like as good a time as any. I had actually made plans to go with a friend at his birthday party and I was drunk and completely forgot about it the next day. “Oh yeah, of course I still want to go. When is it again? Thursday? Perfect!”