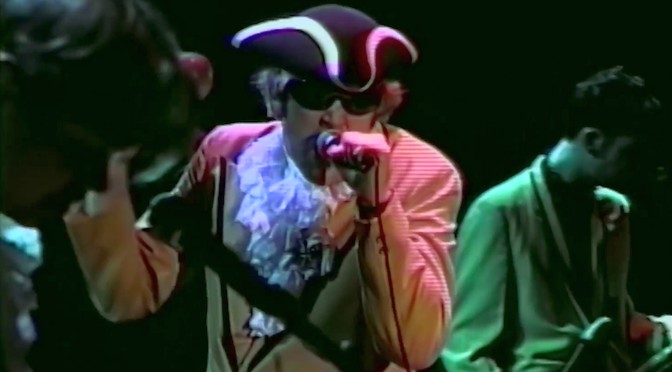 Fortune & Maltese & The Phabulous Pallbearers Live at the State Theatre

Hot damn, I loved this band! And here is some fantastic newly discovered live footage of them at the peak of their powers. Thirty minutes of amped-up garage rock remastered in “Trash-o-Phonic stereo sound.” Live in Kalamazoo, Michigan on February 5, 1995.

I can’t remember if I was at this show, but I might’ve been. I used to go see them whenever I could. Freddy Fortune and Michael Maltese with Nat Cromlech, J.C. Graves, and the greatest drummer of all time: Dusty Sexton.

Check out the video and if you’re not familiar with Fortune & Maltese, you owe it to yourself to dig into them. Unfortunately, none of their stuff is available for streaming yet. So go find their records! They’re out there. Actually, the studio recordings of most of this set are collected on Get Hip’s Fortune & Maltese and the Phabulous Pallbearers compilation.

END_OF_DOCUMENT_TOKEN_TO_BE_REPLACED

Freddy Fortune is back with a new band and a new 7-inch slab of vinyl, recorded in glorious mono. The United Space League‘s “You Told Me A Lie” b/w “Water Under The Bridge” is available now from Bellyache Records. You can stream some songs on MySpace, but Freddy warns us, “Don’t let the crappy sound of a watered down MP3 on myspace fool you—the sonics on this vinyl 45 are hot.”

END_OF_DOCUMENT_TOKEN_TO_BE_REPLACED

We recently uncovered an old email message that pre-dates GLONO by a couple of months. Back in the day, we had it showcased as a feature, but it somehow got lost in the shuffle of redesigns and content management system switches. We’re happy to bring it back. —Jake

Freddy and the Four Gone Conclusions

It was a great show. And with this understatement, I call to mind those long-undead days of the past. I get a titter from the peanut gallery, a dozen “RE:” e-mails saying, “No, I was at the last Truly Great Show.” Perhaps as great of a show as anything since the mirror-studded suits, fireworks display, and bloodied hand at the last Sleestacks performance at Quadstock? Yes. Name them all, yet this show stands proudly on the podium, perhaps even drinking a bit more champagne in the post-race celebration than you’d think fair.

I went to Lili’s last night by myself to see Freddy Fortune and the Four Gone Conclusions open for the 3D Invisibles. Expectations were not high. Nor morale. (Nor I.) One of the two times I had gone to see Freddy’s current band, they didn’t show up. To paint the obvious in a shade of flourescent orange, things were a bit sketchy all over Hamtramck. (Flying solo has its merits, but talking to some psychotic guy who keeps spilling his Corona out his perma-grim mouth does not an evening of companionship make.) Flash forward, however, and by the time the country began changing its clocks for daylight savings time, after hooking up with my less than zero pal Burke, I realized that I had just witnessed a little moment of history in the making. This is one that people will be talking about in tones of reverence for many Halloweens to come.

END_OF_DOCUMENT_TOKEN_TO_BE_REPLACED

Never heard of them? Your loss, jack. Formed in the wake of Fortune & Maltese, Freddy Fortune teamed up with Professor Schmiddy, Chub Marsden, and Buzz Alder to carry on with his mission to turn the kids on to sounds that are never square.

END_OF_DOCUMENT_TOKEN_TO_BE_REPLACED

Check out the brilliant video for garage rock legends, Fortune & Maltese’s song, “Leave No Stoned Unturned,” directed by Hollywood heartthrob Martijn Veltman. After you watch it, you can rank it from 1 to 10. This one’s an 11.