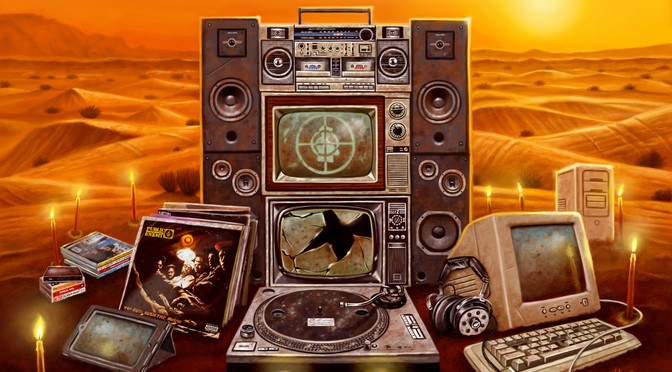 It’s always comforting to hear Chuck D’s voice. He reminds us that there are still righteous people out there speaking truth.

On PE’s bandcamp page, Chuck writes, “After 30 years, 106 tours across 105 countries and countless records, THANK YOU! This one is on Public Enemy. Get it while it’s free.”

I’ve only listened once so far but I wanted to get this up while it’s hot. All I’ll say for now is it’s definitely worth checking out. Dig it.

Download: Public Enemy – Nothing Is Quick In The Desert

…then your record collection could use some fixin’.

Especially since right now, you can download his entire catalog for free from Amazon MP3. But don’t wait, because this is only a three-week deal and after that, it’s over. Well, not totally over. The full Mojo Nixon catalog will be half-price after that. If my math is correct, I think you have until October 27 before they start charging you.

Nixon’s got a new album, Whiskey Rebellion, a collection of previously unreleased material, and this is a very cool way to promote it.

“Can’t wait for Washington to fix the economy,” Mojo Nixon stated. “We must take bold action now. If I make the new album free and my entire catalog free it will stimulate the economy. It might even over-stimulate the economy. History has shown than when people listen to my music, money tends to flow to bartenders, race tracks, late night greasy spoons, bail bondsman, go kart tracks, tractor pulls, football games, peep shows and several black market vices. My music causes itches that it usually takes some money to scratch.”

“Elvis is Everywhere.” “Don Henley Must Die.” “Debbie Gibson Is Pregnant With My Two Headed Love Child.” “Stuffin’ Martha’s Muffin.” These are songs that everybody needs to listen to regularly. Free!

MP3: Mojo Nixon on Jack Kerouac’s On the Road

Full press release after the jump.

END_OF_DOCUMENT_TOKEN_TO_BE_REPLACED

We here at GLONO have a soft spot for the underdog, the band that almost was, the silent workmen who trudge on through the music industry grind…all in the name of rock and roll.

So, how could we NOT post something about The Casual Fiasco when the press release reads like this:

The Casual Fiasco: one of Vermont’s hardest working bands. Cliché as it sounds, The Casual Fiasco has the numbers to back up that claim. In 4.5 years, the roots-rock quartet tallied 800+ shows, 4 albums, and thousands of CDs sold out of the back of a van—a van they put over 200,000 miles on.

What, have they been tailing Two Cow Garage???

In August 2007 the band decided to pack in the road warrior routine, but they made one last EP. According to the PR, there will be no physical print of this album . Instead, they say, “it’s being given away for free to over 20,000 people directly.” I don’t know if that means they’ll block the downloads after 20,000 or what but you better get to stepping if you’re interested in jammy jams from Vermont (I’m looking at you, Josh B).