END_OF_DOCUMENT_TOKEN_TO_BE_REPLACED

A couple of recent articles have made me wonder if the major labels are finally starting to retract their heads from their asses when it comes to dealing with the internet. Last week, the New York Times reported that music labels are now striking more favorable terms with Web companies, and now we learn that Sony will sell songs that are more than two years old on eMusic. That’s a big deal.

Of course, we’ve seen deals like this before, and what can happen with them. And this statement shouldn’t sit well with potential eMusic customers: “As part of the deal, eMusic says it will slightly raise prices and reduce the number of downloads for some of its monthly plans.” I just logged into my account where I had been getting 40 songs per month for $11.99 (which was a non-standard plan, grandfathered in when they raised the prices on their basic plan from $9.99 to $11.99). Now I see a message saying, “Effective Jul 30, 2009, your plan will change to the new eMusic Basic plan which gives you 30 downloads for $11.99 every 30 days.”

Looks like brand new customers will only get 24 songs/month for $11.99. Which kinda sucks, actually. You can buy used CDs for that. We’ll see how it goes. Still cheaper than iTunes though.

Image by Warren Chappell for the Rockford Papers. 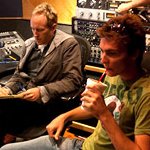 END_OF_DOCUMENT_TOKEN_TO_BE_REPLACED

Last month, we told you about the Mountain Goats’ plans to put out a new double-7″ EP in a “hi-gloss UV gatefold sleeve […] in a limited edition of 666 copies” as a tour only release. Well, the digital download is available now in AAC (256kbps), MP3 (320kbps), AIFF, and FLAC formats. You can pay whatever you think is fair.

All files are available at no cost to the listener; you need not give us your email address or anything. Donations, however, through either PayPal or Google Checkout, are greatly appreciated, and, lest there be any question, are earnestly desired; neither the recording nor the mastering were free, and this site exists as something of an experiment. If you choose to accept these songs, please stop by the collection plate and sow your faith-seed, which, like a grain of mustard, et cetera.

This is an exciting time for music fans. Hopefully, the experiment will prove that even bands that don’t have the major label cultivated fanbases of Nine Inch Nails and Radiohead can pull this off with a base of dedicated fans who give a shit about the livelihood of their favorite musicians…

September 10: Kanye posts a studio version of “Love Lockdown” on his blog. 17 pages of comments reveal that many fans preferred the live version.

September 15: Kanye posts a teaser on his blog entitled, “Your prayers have been answered!! There’s a new version of love Love Lockdown coming. We used new taiko drums and I re-sung it… it’s being Mastered now….” Included in the post is the “newer artwork with perfected type 4 all design snobs lol…” and a sidebar: “if you don’t like autotune… too bad cause I love it and have been using it since the College Dropout!!!”

Later the same day, Kanye posts the new studio version of “Love Lockdown.” The commenters seem pleased with the result.

Who knows if this will be the final final version? But if you care at all about the relationship between artists and fans (and you know we do), you’ve got love this story.

END_OF_DOCUMENT_TOKEN_TO_BE_REPLACED

John Darnielle has announced that The Mountain Goats will be independently releasing a new EP, produced by Scott Solter, entitled Satanic Messiah EP, as a double-7″ in a “hi-gloss UV gatefold sleeve […] in a limited edition of 666 copies,” and only available at shows.

“But wait!” I hear some of you saying. “If I send you some money will you send me a copy?” Let me answer this question once, and once only, and for all time: no. What you will be able to do, though, is download the whole EP from a dedicated site that we’re setting up right now. I hope/expect/pray that the site will be ready within a month or so. The songs will be available in both MP3 and AAC formats at high resolutions, and also, if I can figure out how to make and seed a torrent, as AIFFs, which digitally speaking is the best way to hear them, since Scott Solter is an awesome producer. The downloads will be open to everybody, with no hoops to jump through, though there will also be several options available for those who want to pay me for my work, since part of the point of the exercise is to see whether that’s a viable route for smaller-potatoes-than-Radiohead dudes like me.

Exciting news. Cool to see more bands experimenting with new business models and distribution methods. Darnielle, as a fellow music obsessive, has an unusually open relationship with his fans, regularly getting (deeply) involved in various threads on his zine’s message boards. So I predict that his real fans (myself included) will be willing to support his endeavors.

MP3: The Mountain Goats – “Source Decay” (live in San Francisco, October 23, 2002, courtesy of the Live Music Archive. One of my all-time favorite songs, originally appearing on All Hail West Texas.)

Internet music guru Ian Rogers challenges the hit-making aspirations of the traditional music industry in his latest post on FISTFULAYEN: Does The New Business Of Music Change The Way Music Sounds?

I was on a panel at Bandwith Conference last week and the “Who is going to play The Staples Center in five years?” question came up again. I answered (again), “Who the fuck wants to see a show at The Staples Center?” Do we judge the health of the music business by how many people are pulling half a mill in a single show at a terrible venue? I don’t. Let me be clear, unless your sole source of music discovery is network television and Radio Disney, I hope you never have to see your favorite band at The Staples Center. I saw Bob Dylan there once. It’s a bummer, only fun for the people counting the money.

Rogers calls up Radiohead, the Dandy Warhols, Rod Stewart, and Paul Westerberg as examples of what happens when artists make music for their fans vs. “making it for a hit in the limited radio marketing channel.”

Niche vs. zeitgeist, I guess. Will there ever be another band that appeals to everybody, both the casual radio listener as well as the discerning music snob? Does it even matter?

With the disappearance of advantaged label competencies such as superior production, distribution, and marketing, reconfigure your labels to be based around affinities and focused narrowly enough to serve roughly the same audiences from release to release. The labels would be very small teams responsible for fan cultivation, focused and direct marketing, and A&R. They would rely on EMI for service, support, and tools (generic marketing would happen on the EMI mothership, for example).

Rogers asks the eternal question: “What do Daft Punk, Meat Loaf, KoRn, and The Stooges have in common from an audience perspective? How is there any efficiency in the same marketing team working all of those records (and scads of others just as unaffiliated) in the past year?”

The solution: “I would break these old labels up into new labels which can concentrate on and build the trust of like-minded audiences, post-haste.” There’s more to it than that, of course, and the proposal is well worth reading.

Ian Rogers, who helped found Nullsoft, creators of Winamp, and moved on to Grand Royal, where he shepherded the Beastie Boys onto the internet, is now General Manager of Yahoo Music. He was invited to talk to the music industry at their big convention in Aspen in December, and now he’s got his presentation, Talking To The Music Industry Again, The Aspen Live Conference online:

Our kids are going to watch exactly what they want to watch, not necessarily what’s marketed to them. I understand this is threatening to large media businesses which are accustomed to owning the means of distribution, but I am certain it’s very good for our kids and for culture writ large. We’re all in the same business now, the business of making things people really love.

Like David Byrne, Rogers is optimistic. How about you? How are you feeling about the future of music?