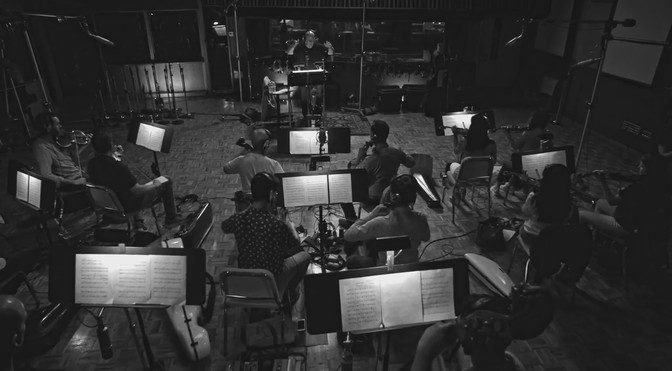 From Pure Comedy, out now on Sub Pop.

I know I know I know, a thirteen-minute hymn to your own hyper-awareness (a “10 verse chorus-less diatribe”) is self-indulgent horseshit. It’s impossible to argue with that.

Try to forget for a sec what a bloated self-righteous asshole Josh Tillman has become, and just listen to the song. Listen to the string arrangement by Gavin Bryars and think of “Jesus’ Blood Never Failed Me” or “The Sinking of the Titanic” and just listen.

“Leaving LA” is arranged, performed, and recorded perfectly. It sounds great. It’s a beautiful song even if the sentiment is bitter.

Tillman claims to assume this song will cost him some fans. The “teenage rosebuds” and “college dudes” will “all jump ship” and think, “I used to like this guy but this new shit makes me want to die.” I dunno. Maybe. I’m a couple decades past being a college dude, and I’ll admit I prefer the manic hedonism of Fear Fun over the grumpy cynicism and misanthropy of the more recent stuff, but I’m guessing his core fanbase knows exactly what they’re getting into.

What I find fascinating about Father John Misty in general and this song in particular is Tillman’s quest to find some kind of balance between his onstage persona and his true self. I don’t think that’s a put on. I believe him. I think he honestly struggles with this dichotomy. Maybe everybody in showbiz does, but Tillman is unusually open about it.