Sam Roberts, Sloan, and the Hard Lessons at the State Theater

I should have seen it coming.

When a friend told me about the Sloan, Sam Roberts, & Hard Lessons show at the State Theater (I’m not down with the Fillmore re-branding) on Thanksgiving weekend, I was psyched. Putting the two best current Canadian rock artists together on one bill in Detroit? Fantastic call. It’s about time someone thought that up. We love Canada around these parts, eh?

So in picking up the tickets, I found out two things: one was that the best local rock radio station in Windsor/Detroit (actually based in Windsor), the River, was putting on the show, dubbing it the “River Icebreaker.” Nothing like a little nudge-wink humor to welcome in the bitter-cold season, yes? The second was that Sloan was opening for Sam Roberts. Curious, but no biggie… I guess Sam’s caught on in the D a bit more than Sloan, what with the topical Detroit song that we’ll get into later, and surely Sloan will get to play a full set, right? I double-checked and found that Sloan was indeed reportedly lined up to play a full set, and I was in like Flynn.

END_OF_DOCUMENT_TOKEN_TO_BE_REPLACED

MP3: The Hard Lessons – “See And Be Scene” from B&G Sides Volume 1 out now on Quack (but apparently unavailable online). This is really great Detroit pop complete with handclaps and boy-girl vocals. What more could you ask for? 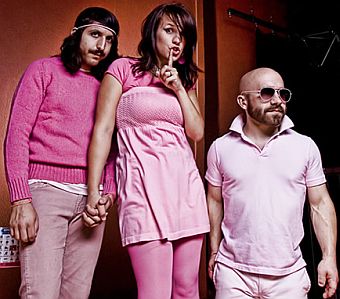 Video: The Hard Lessons – “See And Be Scene”

The Hard Lessons, See and Be Seen

• The Hard Lessons – “The Painter”

The Dirtbombs’ Ben Blackwell calls out the Detroit music scene for paying lip-service to mediocre bands and calls for honesty and straightforwardness: Lessons I Hardly Learned at the Hamtramck Blowout…

“I believe a lot of people are scared to be frank for fear of how others will be honest in return. Too few a people in town are comfortable enough with how their own band is/was/will be to genuinely give others their honest opinion.”

GLONO alum Stacey K. Anderson files a report for the Metro Times on Detroit noise machine the Hard Lessons’ gig in the final days of CBGB.

Among the gems that illustrate why we loved Stacey from first glance:

“Detroit? Sorry, never been there. I imagine it’s a magical, overcast place where everyone grouses about the auto industry, apologizes for Michael Moore and tolerates Canadians for drug-related purposes.”

“CBGB may change locations, but it won’t go anywhere if promising bands like this keep appearing, inspired by the collective force of its past.

This is Detroit? I’ll take it.”

We miss you Stacey, we mean it.

The Hard Lessons – Gasoline (No Fun)

It may be a hard lesson to learn, but Detroit garage rock lived and died with the Stooges and the MC5. Today the world beyond Motor City limits can sustain only one Detroit rock revival band at a time. This group must possess something special – a heady blend of charisma, chops, chaos, skill, bravado, noise, hair, insanity, defiance, and genius – in addition to reverence for the spirit of the genre’s architects. (That band might currently be the Dirtbombs.)

The Hard Lessons are most definitely not that band. Their debut full-length, Gasoline, is fuel for the fire into which all wannabe retro Detroit rock-and-rollers should be flung. The awkwardly uneven record progresses from contrived (the infectious yet all-too-obvious opener “Feel Alright”) to sentimental (singer Ko Ko Louise is more than a little bit country in “That Other Girl” [mp3]) to plain irrelevant (“I take milk and sugar in my tea,” pronounces Agostino Visocchi in “Milk and Sugar” [mp3] – now that’s rock and roll).

Only a few of Gasoline‘s 11 songs approach success. Highlights “Share Your Vanity” and “Feedback Loop” draw from the raw, primitive energy that defines Detroit garage rock. If the Hard Lessons could throw ten more songs like these on a record, they just might get somewhere. But if not, forget about it – the rest of their stuff is simply no fun.