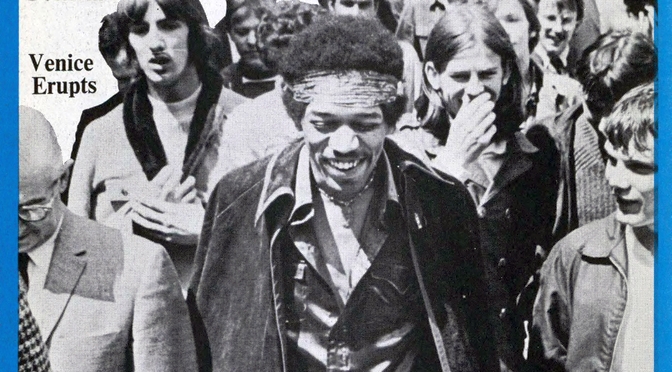 News: “Janis and London Come Together” by Jonathan Cott and David Dalton; “A Decency Rally Fans the Flames”; “An Unpleasantness At Venice”; “Hendrix Busted In Toronto” by Ritchie Yorke and Ben Fong-Torres; “The Ballad of John & Yoko”; “Free Music”; “Ash Grove in Ashes After $40,000 Fire”; “Magical Mystery Non-Benefit”; “Fuzz Against Junk” by Akbar Del Piombo. And Random Notes.

END_OF_DOCUMENT_TOKEN_TO_BE_REPLACED 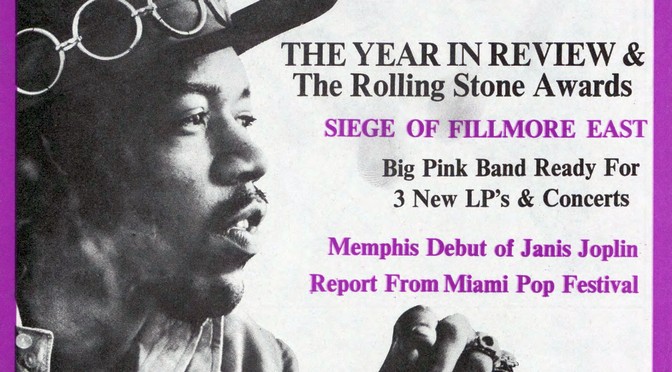 END_OF_DOCUMENT_TOKEN_TO_BE_REPLACED

Let’s be honest, we’re gaining nothing new from a “new” Jimi Hendrix record. At this point, we are only able to piece a day-by-day audio picture of the man, cobbled together occasionally in some semblance of a record. There’s a part of me thinks that the man, himself a perfectionist who would record endless takes of a track until he found the right one, would be rolling in his grave at the thought of us still releasing albums from his audio demos, rehearsals, and alternate takes.

He died too young to give a clear indication of where he wanted to go next, and judging from what I’ve read, his passing came during a time when different factions in his life were pressuring him to do more with his notoriety. More shows. More money. More responsibility. And all the man really wanted to do was to play his guitar.

END_OF_DOCUMENT_TOKEN_TO_BE_REPLACED

The Smoking Gun has dug up Jimi Hendrix’s 1969 Mug Shot from a bust at Toronto’s Pearson International Airport after “customs inspectors found heroin and hashish in his luggage.” Acquitted!