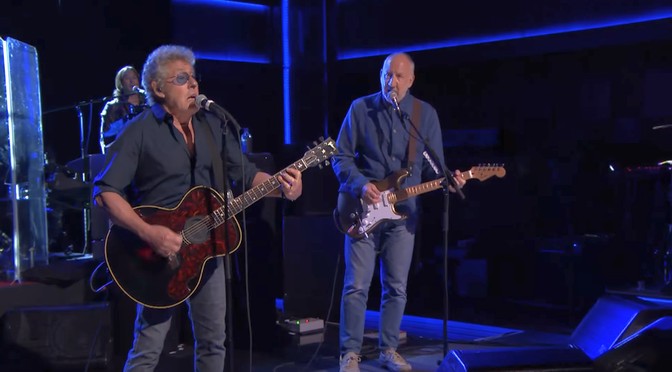 When I saw that the Who had recently performed a couple of classics on the Tonight Show with Jimmy Fallon I immediately forwarded the link to Stephen Macaulay. Mac has a long history with the Who, dating back to seeing them at Cobo Hall in Detroit when he and the band were all scruffy young guys. He’s been quite vocal over the years on his disappointment over what they have become. -ed.

Video: The Who: “I Can See for Miles” (live on the Tonight Show)

The Who: I Can See for Miles

Imagine listening to “I Can See for Miles” with your eyes closed. Wouldn’t you imagine that this was a good cover band, but something sounds slightly off on the lead vocals, as though the singer was trying too hard or having too difficult a time?

And then you open your eyes and watch.

But what the hell is Daltrey doing with that acoustic guitar? Does he really think that Pete and Simon can’t handle it? Or is it that he doesn’t quite have the confident moves anymore and so the guitar becomes a prop that keeps him from having to make those moves. Plus, with Pete teasing and doing the windmills is physically distracting.

(There is no crutch for the vocal cords, however, at least not, apparently, in this venue.)

END_OF_DOCUMENT_TOKEN_TO_BE_REPLACED

It’s got nothing on the original (see below), but Neil clearly understands the emotional weight of seeing something so intense. All the way.

END_OF_DOCUMENT_TOKEN_TO_BE_REPLACED

We wrote about this song when 4AD first gave away the MP3 back in July. It’s still my favorite song on the album, and this live version is pretty great. Interesting to see John Darnielle standing behind the keyboard with Perry Wright from the Prayers and Tears of Arthur Digby Sellers filling in on guitar. The rhythm section of Peter Hughes and Superchunk‘s Jon Wurster is as badass as ever. Fallon is a goof, but what can you do?

I’m starting to think Jimmy Fallon might be a lot funnier than he’s been given credit for.