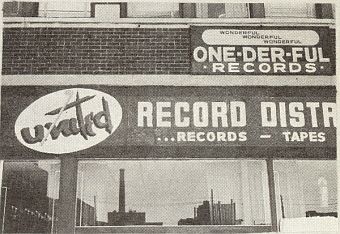 This is, quite simply, the best piece of investigative music journalism I’ve read in a long, long time: “The Jackson Find” by Jake Austen for the Chicago Reader.

Many hardcore fans know that the Jackson 5 released a pre-Motown single called “Big Boy” on Steeltown Records. It was recorded in November 1967 at a small studio in Chicago’s West Englewood neighborhood. But what was unknown until this article was being researched was that a few months earlier—on July 13, 1967—the Jackson brothers had recorded the same song at legendary One-derful Records, home of the Five Du-Tones (“Shake a Tail Feather”).

The decades to come may well bring a wealth of unreleased Jackson songs, on par with the from-the-grave output of Hendrix or Tupac. But most observers expect this onslaught to consist principally of overproduced late-period jams, many of them unfinished at the time of Jackson’s death and augmented posthumously. The possibility that the first unreleased track to surface will instead be a decades-unheard recording of the Jackson Five’s first studio endeavor—a stripped-down 60s R & B tune, cut without adult ringers at a better studio than their debut single—is almost too good to be true. The One-derful session is worlds away from the slick and calculated work the Jacksons would soon do for Motown. It captures an eager, unjaded nine-year-old only months away from the end of his childhood, a childhood he would pursue for the rest of his life: Michael, a big boy now, soulfully lamenting that “fairy tales and wishful dreams are broken toys.”

Let’s hope this gets actually gets released.

Print Version of Blender to Cease Publication. It will still exist online.

A few months after we launched GLONO, we covered the launch of a new music mag from the publisher of Maxim: Rock and Roll and Boobies Too. I picked up that first issue, and wasn’t as horrified as I’d been led to believe I would be. Over the next eight years (almost), I’ve purchased less than a handful of other issues. Sorry.

One issue I did pick up was back in June 2004 when they covered our silly “I Beat Up Jason Von Bondie” t-shirts…without mentioning either Glorious Noise or the designer, Matt Ardinger, unfortunately. So I can’t say I’ll actually miss Blender, but I already miss the idea that readers are able to support more than a couple music magazines. Personally, though, as long as I’ve got TapeOp and MOJO, I’m covered.

Extra: Dean of American Rock Critics Robert Christgau eulogizes Blender, where he had worked since 2007. And compares it to Creem!

Jason Gross has published his annual Best Music Scribing Awards. A ton of great stuff I missed last year, including Paul Ford‘s “Six Word Reviews of 763 SXSW MP3s” which is as overwhelming and awesome as you can imagine…at least for the first couple dozen that I made it through. (For those who don’t recall, Ford is the guy who invented our dearly beloved Gary Benchley.)

Gross’ choices of winners are impeccable, but his introduction is depressing and gloomy. Yeah, we know: print is doomed, writers are sloppy and lazy, partnerships are attractive, and technological innovation might some day end up being promising. Boo hoo. At least we elected Obama, right?

Update: Turns out those were just the “bronze medal” winners. The silver and gold medal winners are up now.

END_OF_DOCUMENT_TOKEN_TO_BE_REPLACED

Last week, we talked about how the Washington Post fucked up its RIAA story about a case where a dude ripped his CD into his Shared Folder for Kazaa. The RIAA says that just making the files available equals infringement even if nobody downloaded them. But that’s not what the law says, and now the Electronic Frontier Foundation has filed a Brief in Atlantic v. Howell Resisting RIAA’s “Attempted Distribution” Theory:

Sure, it would make it quite a bit easier for the RIAA if they could go to court and simply say “this person had our songs in their shared folder, we win.” But that’s not the law. If the RIAA wants to bring tens of thousands of lawsuits against individuals, they have to play by the rules and prove their cases. That means proving that actual infringing copies were made or that actual infringing distributions took place. It’s not enough to prove that they could have taken place.

Remember that Washington Post article that everybody freaked out about a couple weeks ago? The one about how the RIAA was going after personal use?

We didn’t link to it here at GLONO because we knew the whole premise of the article was incorrect. In that particular case, the dude was not getting busted just because he ripped a CD, but rather because he ripped it into his Shared Folder for Kazaa. Which is a big difference. And now the Post has (finally) issued a correction.

END_OF_DOCUMENT_TOKEN_TO_BE_REPLACED

A writer for Arthur and Blender donated a bunch of CDs to a thrift store, and then got in big trouble after somebody bought one and uploaded it on a filesharing network. My Data Crime – The Ticking Time Bomb of the Watermarked Advance CD:

By watermarking their advance CD, Ba Da Bing was hoping not only that they would make recipients too paranoid to upload, but that the object itself would do the threatening. The physical advance, not the publicist or the label head, is now attempting to renegotiate the time-honored and rather informal promotional contract between company and writer. Such renegotiations can be aggressive, and such aggression destroys the aura of chumminess that rules between publicist and writer. One of the reasons I fucked up is that the Beirut advance did not clearly announce itself as being watermarked—my name was printed on the CD, which I didn’t even notice, and there was no further warning.

How is a record reviewer supposed to make any money if they can’t sell their promos?

MP3: Beirut – “A Sunday Smile” from The Flying Club Cup, due October 9 on Ba Da Bing.

So Jeff Tweedy is now reviewing records for the New York Times: So, Mr. Would-Be Critic With Alt-Rock Leanings… “I’m probably the only person that wanted to be a rock critic and failed at it and started a band.”