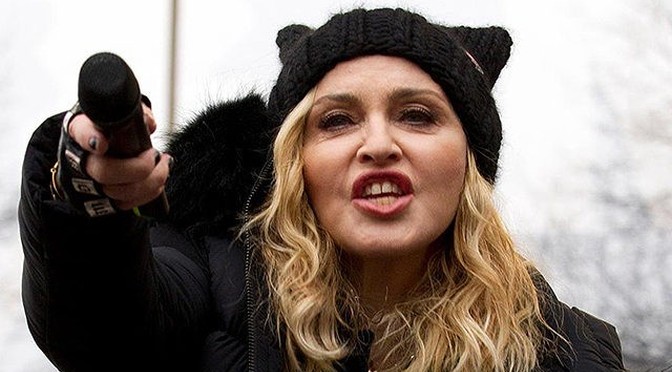 One of the things that often happens when a performer—be it an actor or a musician—makes a political point is that there is a degree of dismissiveness among some—even among that person’s fans—, a reaction that has it, in effect, “Oh, she’s just an actress, what does she know?” (Or, as our President put it about Meryl Streep, “one of the most-overrated actresses.”)

We can allow these people to move us in their performances, but somehow that has nothing to do with their intelligence or capability or thoughtfulness. They are “just” playing or singing or acting. What do they know?

Of course, when it comes to the campaigning part of politics, it is all good to have the actors and musicians to come on stage with the candidates to lend support, be they Gary Busey or George Clooney, Wayne Newton or Bruce Springsteen. (Yes, I’ve made loaded choices of supporters of the candidates in the last presidential, but they are no less true.)

When Madonna says “Yes, I have thought an awful lot of blowing up the White House, but I know that this won’t change anything,” you’d think that the 58-year-old performer was going to be in charge of life-altering policies for literally hundreds of millions of people; when a presidential candidate says in a speech of his opponent, “If she gets to pick her judges, nothing you can do, folks. Although the Second Amendment people, maybe there is. I don’t know,” it gets pretty much treated as though, “Oh, it’s just him being him.”

Actors or musicians, the thinking seems to be, really don’t know more than their crafts. Lawyers and real estate developers—they know lots about everything.

END_OF_DOCUMENT_TOKEN_TO_BE_REPLACED

Imitation is the highest form of flattery…or larceny.

Video: MADONNA, LADY GAGA: SHE’S NOT ME (THE “COMPARISON” VIDEO)

END_OF_DOCUMENT_TOKEN_TO_BE_REPLACED

It’s unfortunate, but I am forced to consider matters of sexual content in nearly every form of media when it is in proximity to my children, ages six and two. It’s a shame because it forces my wife and I to take on the role of entertainment babysitter at all times and the only form of relief is when we put the channel on something that’s exclusively for the age group we’ve sired.

What that means is that our television is continually on this shitty network called Sprout and we’ve both agreed that if we ever come across a real world replica of the cartoon character Calliou, we are going to kill and dismember the little bastard.

When it comes to matters of music, it’s a touchier subject. It goes without saying that I’m pretty opinionated when it comes to matters of controlling our family’s musical playlist and, goddamnit, I don’t feel the need to acquiesce when we’re considering what’s appropriate for the ears of our children. After all, I was fucking raised on Sgt. Pepper’s, Beggars Banquet and Jesus Christ Superstar. I’ll be damned if I’m forced to spin Kids Bop or some album by The Wiggles just to ensure our kids aren’t subjected to an f-bomb, a lemon squeeze, or fifty foot queenies.

As a result, my two-year-old daughter now has a penchant for The Runaways.

END_OF_DOCUMENT_TOKEN_TO_BE_REPLACED

Billboard points out that “Regardless of genre, retail sales or radio play, each of the 20 acts on Billboard’s Moneymakers list toured in 2008.” In fact, Madonna “only had the 50th-best-selling album in the country.” So…current sales really don’t matter. People are going to these big-production shows to hear the oldies. Seems obvious.

Of the Top 10, only the Jonas Brothers first charted within the last five years. The rest have been around since at least the dawn of the new millennium… There’s only a handful of post-millennial acts in the rest of the Top 20: Michael Buble, Miley Cyrus, Taylor Swift, and Kanye West. Think any of them will be making this chart in 25 years? (Of course, people would’ve said the same thing about Madonna and Bon Jovi…)

See the rest of the Top 20 after the jump…

END_OF_DOCUMENT_TOKEN_TO_BE_REPLACED

Over on MSNBC, Tony Sclafani argues that Madonna has surpassed the Beatles in regards to her influence on pop music.

It’s Madonna‘s impact on the course of pop music that bests the Fab Four, not her sociological importance, songwriting skills or recording innovations. Influence means an artist has an effect on the future direction of music. While the Beatles influenced scads of artists in their time, after their breakup, their sound became yesterday’s news. Artists that tried to copy them (Badfinger, the Raspberries, Squeeze) seemed quaint or quirky.

But a quarter century after Madonna emerged, artists still use her ideas and seem modern and edgy doing so.

There’s a jump in logic there: comparing artists that “tried to copy” the Beatles to artists that “use [Madonna’s] ideas” is apples/oranges. I mean, the Beatles proved that mainstream pop music can be taken seriously; the fact that the phrase “sociological importance” comes up in a commentary about pop music owes a lot to the Beatles.

But he points out a few interesting things:

• “[B]efore Madonna, most music mega-stars were guy rockers; after her, almost all would be female singers.”

• “Top 40 and MTV back then treated black music like a subgenre — not the backbone of 20th century American music, as it’s recognized now.”

• “When the Beatles hit America, they changed the paradigm of performer from solo act to band. Madonna changed it back — with an emphasis on the female.”

I could easily argue both sides of this argument. But what do you think?

END_OF_DOCUMENT_TOKEN_TO_BE_REPLACED

For seven days, you can download a free zipped up MP3 of Madonna’s contribution to Live Earth: The Concerts For A Climate In Crisis.

For each of the first million downloads, MSN will donate 25 cents to the Alliance for Climate Protection. More PR.

Update: Don’t bother downloading unless you want MSN to contribute 25 cents to charity. The song’s a lame ballad with trite lyrics and a silly war-call drum rolls.

END_OF_DOCUMENT_TOKEN_TO_BE_REPLACED

Back in the early days when this site was somewhat younger, there used to be observations on the main page like that quoted here. Perhaps we were somewhat less circumspect.

I thought about that last night when I saw the Madonna/Missy (Misdemeanor) Elliott commercial for the Gap. And although Britney has faded into irrelevance such that her visibility is marked with a certain desperation, a need to get in the public eye, almost as though her doing damn near anything to get some time on “Entertainment Tonight” would not be in the least bit surprising (e.g., dangling herself off of an eighth-floor balcony), Madonna, heretofore, a film career that she ought to abandon, notwithstanding, has—or had—maintained a certain allure.