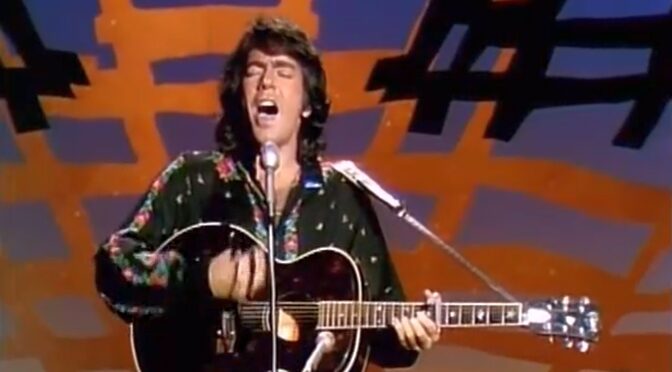 The second episode of the final season of the Johnny Cash Show aired 50 years ago today on September 30, 1970, from Music City USA, Nashville, Tennessee. It featured guests Neil Diamond, Jackie DeShannon, and Dennis Hopper along with the usual regulars: June Carter and the Carter Family, the Statler Brothers, Carl Perkins, and the Tennessee Three.

Since the previous episode aired on Ray Charles’ 40th birthday it got me thinking about the ages of the folks on the show, and how much older people looked back then. Like, everybody looked 40, even people in their 20s. Here, Neil Diamond and Jackie DeShannon were both 29 and Dennis Hopper was 34.

A new segment debuted on this episode called “Country Gold” which apparently showcased important country musicians. Or something. This week featured Claude King, who had a few hits in the early sixties, but otherwise…who? It’s a little hard to figure out, really, since the list of artists is just kind of random: Bobby Bare, Floyd Cramer, Bill Monroe, the Stonemans, Hank Snow, Connie Smith, Bill Anderson and Jan Howard. Sure, many of those folks would ultimately be inducted into the Country Music Hall of Fame, but of all the legends who were still alive in 1970, why them? Perhaps only Johnny Cash knew the answer.

How great is Neil Diamond though? The Diamond had first appeared on the show in February and came back to do his best song: “Cracklin’ Rosie.” His performance is perfect, as is his shirt.

Later in the show a very high Dennis Hopper reveals that he cannot sing as he warbles an embarrassing duet of Kris Kristofferson’s “The Pilgrim” with his host. To prove he’s a very serious artist Hopper then recites a Rudyard Kipling poem…very intensely. 1970 was weird, man.

END_OF_DOCUMENT_TOKEN_TO_BE_REPLACED

The “Jewish Elvis (with a charting Christmas song)” covers Adam Sandler to remind everybody that Henry Winkler and all the other cool people celebrate the Festival of Lights. This year, Hanukkah begins at sundown on Friday December 11. From A Cherry Cherry Christmas, out now on Sony/Columbia.

The recent coverage of Glen Campbell here is remarkably coincident with the rise of a performer of similarly long pedigree who, some would say, has had a recent resurgence, while others—David Wild, foremost among them—would say he’s never really stopped shining. Yes, I am talking about Mr. Neil Diamond.

It had the makings of a good road trip. A new car. A full tank of gas. Clear weather. A challenging route. My navigator, although I didn’t know him all that well, was a personable fellow, who can read a map and, more importantly, drive well, so I didn’t need concern myself with our getting lost or spinning uncontrollably over the edge of a mesa. But I was to learn more about him. And I was to have an out-of-control experience of another sort.

A couple hours into the trip, when the radio stations had gone from bad to worse to static (no satellite radio in the car), my colleague reached into a satchel and extracted his iPod. He hooked it into the aux jack. Neil Diamond’s Home Before Dawn had just been released, and he dialed it on. I was to discover that my navigator, a man a few years younger than Diamond, spent his Thursday nights as a singer is a bar where Thursday night meant “Karaoke Night.” When management saw that the stage was empty and it seemed as though it was going to stay that way, up went the ringer, my navigator, who would belt out Aerosmith, Meatloaf, Rod Stewart, Bonnie Tyler. . .it didn’t matter.

And in the car I was to experience this, over and over again, but in a different way. His all-time favorite and audio mentor, I was to learn, is Neil Diamond. This was not Neil and Streisand in the car. No, this was pure, unadulterated Diamond lust. For hours.

All I could think about was hitting a tree.

END_OF_DOCUMENT_TOKEN_TO_BE_REPLACED

Rick Rubin pisses me off. What’s he got against drums? I could almost forgive the lack of drums on Rubin’s first Neil Diamond production, 12 Songs. Back then, one could argue that it was necessary to clear the slate of all the sequins and spangles that Diamond had been building up since 1973. I wasn’t happy about the lack of drums, but I could understand it.

But two in a row without drums? That trick’s a gimmick, Rick. You don’t need to beat us over the head with intimacy. Especially not when the songs are (once again) this good.

END_OF_DOCUMENT_TOKEN_TO_BE_REPLACED

Video: Neil Diamond – “Pretty Amazing Grace” from his upcoming album, Home Before Dark, once again produced by Rick Rubin. Due May 6.

Hopefully, this time Sony won’t destroy your computer if you buy it…

Looks like Neil Diamond will be working with Rick Rubin again for his next album. Undetermined is whether it will be another album of originals, like 12 Songs, or whether it’ll fall back on the proven Johnny Cash formula of mixing covers of 90s alternative rock with obscure older songs.

“It depends on how long the writing process takes,” Rubin told Billboard. “I thought if it’s going to take a while to write, it might be fun to do a covers album in between, but we’ll see. The material is going to dictate everything.”

Previously: Shine On You Crazy Diamond.

Rick Rubin is not God. He has produced more than a few bad albums in his day. Yes, his early work the Beastie Boys, Run-DMC and Slayer is undeniably awesome. But after that, for every Johnny Cash record, there have been plenty of mediocre releases by the Cult and Red Hot Chili Peppers. And Weezer. The magic that he created on Cash’s 1994 American Recordings is not that easy to replicate.

He tried with Donovan in 1996 on Sutras but failed. I might be the world’s biggest Donovan apologist, but that album is just not that good. It’s out of print now, so most people will never even know. The problem was that when Rubin stripped Donovan down to his bare essence, all that was left was a sweet old guy singing boring (but pretty) ballads that didn’t really go anywhere or make you feel anything.

END_OF_DOCUMENT_TOKEN_TO_BE_REPLACED

The Frog Who Would Be King – The importance of being Neil Diamond by Ben Fong-Torres. September 23, 1976.

Rick Rubin: “I don’t think of them as Rick Rubin albums. I think of it as a really great Neil Diamond album or a really great Johnny Cash album. It’s really from a fan’s point of view. These are people that I love, and trying to get them to be what I imagine they could be. This is the album I want to hear.”