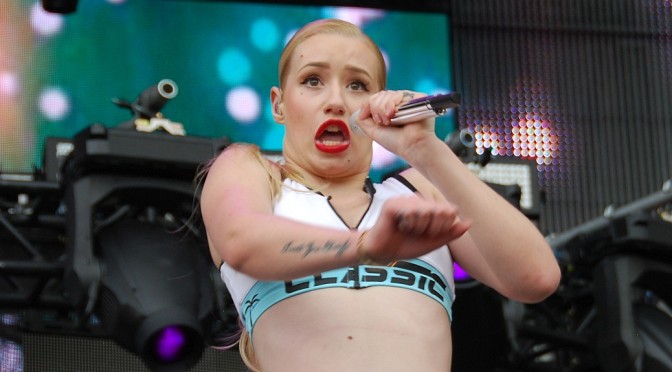 We finally sorted through our Lolla pics (taken by the unsinkable Jolie Brown) and just uploaded a bunch of them to Flickr. In case you missed it, here’s our Lolla 2014 wrap up. Enjoy the photos.

END_OF_DOCUMENT_TOKEN_TO_BE_REPLACED

Making the rounds right now is this awesome video from the students of Shorewood High School in Shoreline, Washington. It appears this is all part of a friendly rivalry between Shorewood and neighboring Shorecrest with a lip dub challenge that is getting increasingly competitive—and all in good fun.

It started out pretty awesome with Shorecrest getting the whole school involved in a lip dub of Outkast’s “Hey-Ya” that has gymnasts jumping around, Power Rangers singing, a banana in a wheel chair, and a host of other kids leaping in and out of the screen.

But Shorewood ups the ante big time by not only busting out some vintage Hall & Oates but doing the entire song in one take…backwards.

When kids are getting a bad rap from national coverage of violence, sexting and the everyday nonsense to which we can all plead guilty from our days of youth, doesn’t it just warm the heart to see stuff like this? Now excuse me while I change out of my cardigan and into my bathrobe to watch some Matlock.

Stream “Mighty O” by the Outkast: Real, Win. The first single from Idlewild features Andre 3000 and Big Boi rhyming together on the same track for the first time, apparently, since 2000. What do you think? Also: Idlewild Blues.

END_OF_DOCUMENT_TOKEN_TO_BE_REPLACED

Maybe the thought of Outkast breaking up isn’t such a sad notion after all…as long as they keep packaging their solo albums together.

By going their own ways and recording two solo albums under the Outkast name, Andre 3000 and Big Boi have again done what no one thought they could do—shatter the boundaries of hip-hop. No—forget about hip-hop, Outkast have conquered popular music as we know it, standing on the sublime plateau of genius next to Radiohead, the Beatles, Miles Davis, Johnny Cash, and every other genre-revolutionizing artist in recent history. On previous efforts, Andre 3000’s eccentric personality and Big Boi’s knack for party-bumpin’ beats balanced each other out, resulting in a slightly-deranged but incredibly fun catalogue, each album a giant leap over the last. Here, each party takes things as far as they want, each disc the polar opposite of the other.

The Love Below, Andre 3000’s album, almost entirely eschews hip-hop in favor of an exotic blend of styles—soul, jazz, breakbeat, funk—coming away with a warped impression of Prince or George Clinton at times. Andre’s work is certainly the more eclectic of the two; ranging from the strip-club bounce of “Spread” to the collaboration with Norah Jones, “Take Off Your Cool,” a beautiful jazz-folk number that features each of their distinctive voices melting into one. Its subject matter is narrow—relationships, love, one-night stands—and the lyrics sometimes jump off the cliff into absurdity, but consider this: Andre 3000 can get away with it because he is hip-hop’s answer to Frank Zappa.

Now, I’m not by any means saying that Speakerboxxx, Big Boi’s disc, is a walk through normalcy. It’s just that Big Boi stays on a similar line as Outkast’s old material. The beats here are explosive, he’s a very able lyricist and the collaborations are just right. The songs keep such a raucous energy despite the odd nature of the music and its unique timbres, rhythms, and time signatures.

On Speakerboxxx/The Love Below, both Andre and Big Boi find the greatest success with their respective first singles. “Hey Ya” is saturated with pure pop energy, an overwhelming track that attacks your ears in much the same way “B.O.B.” did on Stankonia. “Ghettomusick” has the tightest beat on either album, which eventually breaks into an old jazz sample and re-emerges on the other side.

The journey through each album is an exciting one—hilarious at times, captivating at others, and almost entirely frustrating in its spirit. Outkast have managed to raise the bar yet again. In the coming years, the only foreseeable threat to Andre and Big Boi are Andre and Big Boi themselves. Should they decide to go their separate ways for good, they’ll have already given us more then what we could ask for—including the comfort that even without each other, Outkast have the game beat.