According to the New York Post, Charles Manson wants to collaborate with Phil Spector since they’ve both got some time to, um, kill at Corcoran State Prison in central California:

Soon after he settled in, “a guard brought Philip a note from Manson, who said he wanted him to come over to his [lockup]. He said he considers Philip the greatest producer who ever lived,” [Spector’s wife] Rachelle told Page Six. “It was creepy. Philip didn’t respond.” […]

“I think Manson wants to glean some musical advice from Phil, who was a ’60s music god with his ‘Wall of Sound,’ ” Spector publicist Hal Lifson told us. “But Phil’s like, ‘I used to pick up the phone and it was John Lennon or Celine Dion or Tina Turner, and now Charles Manson is trying to get a hold of me!’ “

Awesome! If you’ve heard the Beach Boys b-side “Never Learn Not To Love” or Guns N’ Roses‘ The Spaghetti Incident, you’ve heard Charlie’s songwriting skills. His semi-legit album, Lie, has a handful of good songs, too (“Look at Your Game Girl,” “Home is Where You’re Happy”). This has the potential to be absolutely killer! Number one with a bullet, baby!

The Smoking Gun has Phil Spector‘s most recent booking photo, and unfortunately for the convicted murdered, “Unlike his prior booking photo sessions, Spector was not allowed to wear a wig, per state prison regulations.” 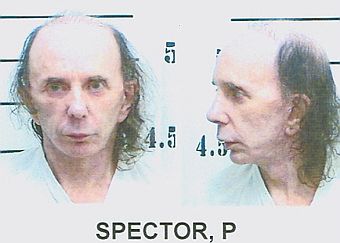 After three weeks of deadlock, the jury was released from duty today after the judge declared a mistrial for Phil Spector. The jury deliberated for 12 days, taking six ballots, but was unable to reach a unanimous verdict.

Spector was accused of killing Lana Clarkson, a B-movie actress who had fallen on harder times and was hostessing at the House of Blues, on February 3, 2003.

Anyone who knows anything about the history of rock and roll knows Spector is no stranger to guns. In fact, four women testified of their own gun toting encounters with with Wall of Sound inventor.

END_OF_DOCUMENT_TOKEN_TO_BE_REPLACED

Let’s face it. Things have been pretty disturbing of late. There was the awfulness of the Columbia horror. We have been on the precipice of war for some time now, and it seems as though each day brings us millimeters closer to the free fall. Some of us have been wondering about Townshend’s ISP, and whether he’s been flung from the system at a velocity faster than a windmill move. Phil Spector has signed on part of the O.J. defense team. Things are disturbing. But there is a ray of, er, hope. Thanks to Courtney Love.