Video by Erik Pousette. From [DETENTION], out now on PNKSLM.

There are no guns or chickens in the latest video by our favorite Swedish troublemakers, but it’s still pretty good.

According to numerous posts on social media, SkitKid was kicked off their upcoming U.S. tour with the Melvins. Not a lot of details. Only explanation is “for being too bad ass” and that “we were also looking forward to it! But we will come over headlining next year for sure.” 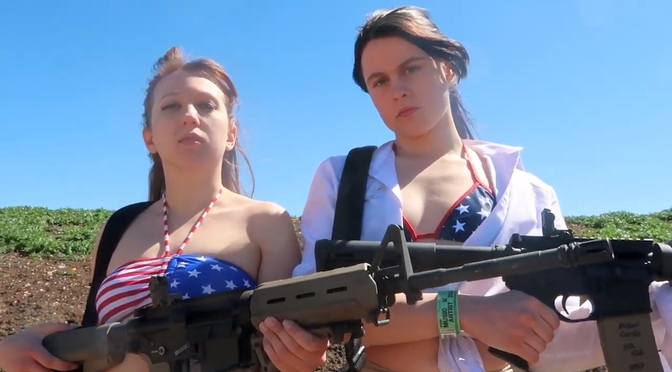 Directed by Åsa Söderqvist. From [DETENTION], out now on PNKSLM.

How great is this? I don’t know anything about this band other than what I have gathered from their label’s bio which says they’re “one of the Sweden’s biggest underground success stories of recent years.” Well alright.

You cannot argue with a song that starts like that. What’s going to happen to our hero and her little flute-playing boy? Who knows? But the video features main ShitKid Åsa Söderqvist and her new bandmate Lina Molarin Ericsson posing provocatively with classic American cliches like chickens and guns and American flag bikinis. Yeehaw.

[DETENTION] is a scintillating eight-track pop-punk blast of teen angst that pays tribute to the bands Söderqvist loved in her formative years, whilst also resurrecting a very specific wave of emo that’s died a death in the years since. “I started listening to the bands that I loved in school again, and I felt inspired by it,” she explains. “It’s a genre that’s quite embarrassing to go back to, and I knew that would make it really fun. I used to be emo in 2008, and now nobody plays that music any more! There’s nothing about being kids and nobody understanding you. It felt like time to bring it back.”

Is this what emo sounds like? Who knew! It’s awesome.