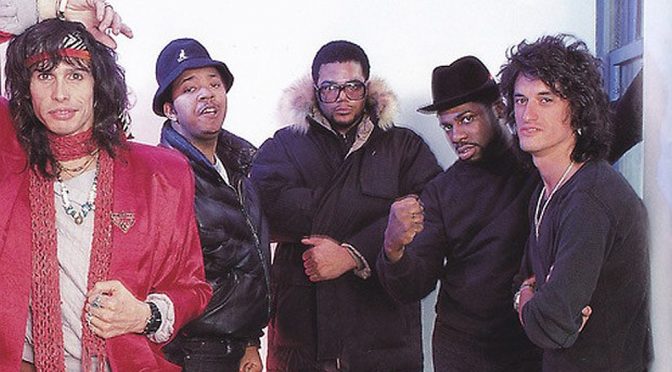 Stop what you’re doing and read this Washington Post piece: The inside story of when Run-DMC met Aerosmith and changed music forever by Geoff Edgers. It’s as amazing as you could hope for. Even if you don’t have time to read the whole thing right now, at least watch 4-minute collection of unreleased MTV News footage from the recording studio on that day.

I love the fact that DMC’s first reaction to listening to the lyrics was: “Hell no, this ain’t going to happen. This is hillbilly gibberish, country-bumpkin bullshit.” Glad he changed his mind!

I remember loving the video as a kid, and then one day I was at my cousin’s house watching MTV. He was three years older and by 1986 was a heavy metal stoner. His reaction to the video surprised me. “They ruined a perfectly good song.” I had never heard the original. When I finally did, I was let down. The Run-DMC version is way better.

It used to be Rick Rubin. Music geeks across the world would play the party game “Who would you like to see Rick Rubin produce?” After the Johnny Cash revival, it seemed the bearded guru could do no wrong. That, of course, was bullshit even at the time. Immediately after the success of the first American Recordings album, Rubin attempted to recreate the magic with Donovan on Sutras. And failed.

Since Cash’s death in 2003, Rubin has attempted “comeback” albums with Weezer, Metallica, and, um…Linkin Park. Mixed results would be putting it mildly. His two albums with Neil Diamond (2005’s 12 Songs and 2008’s Home Before Dark) have come the closest to the spark that was lit with Johnny Cash.

Meanwhile, a new kid on the block took the torch and ran with it. Loretta Lynn‘s 2004 album Van Lear Rose proved that there was more to Jack White‘s production abilities than Detroit garage rock. And now it looks like he’ll be producing rockabilly legend Wanda Jackson.

END_OF_DOCUMENT_TOKEN_TO_BE_REPLACED

Death Magnetic is the best album that Metallica has released since …And Justice For All.

Now take a quick peek at the band’s catalog since that release and listen as the air escape from that hot air statement. What’s even more fabricated are the tales originating of how Rick Rubin set out to make an album with the same type of quality control as Master Of Puppets. It is that highlight from the numerous pre-release hype machines that convinced me—and thousands of others—that Metallica might have indeed come to their senses and set out to make an album that redeemed themselves after nearly twenty years of calculated bids for mainstream acceptance and embarrassing side steps. Yet there was that nagging understanding that there is no way that Metallica could make an album as good as Puppets regardless of whose name is listed as producer. What we really wanted to see was if Metallica could make an album as good as Justice.

END_OF_DOCUMENT_TOKEN_TO_BE_REPLACED

According to Billboard, Crosby, Stills & Nash is planning on recording a collection of covers with producer Rick Rubin:

“Rick Rubin’s a brilliant man,” Graham Nash tells Billboard.com, “and what he wants is an album with no CSN songs. He wants to do an album of all the songs we love, all the songs we wish we’ve written. It’s brilliant from this point of view because we usually wait five years to record an album. This way there’s no pressure.”

Nash says he, David Crosby and Stephen Stills have had “many discussions” with Rubin about the project, whittling the proposed list of songs from 60 down to a current 20, which the trio is rehearsing after sound checks during its summer tour. Nash declines to name specific songs but acknowledges most would be considered well-known.

Rick Rubin pisses me off. What’s he got against drums? I could almost forgive the lack of drums on Rubin’s first Neil Diamond production, 12 Songs. Back then, one could argue that it was necessary to clear the slate of all the sequins and spangles that Diamond had been building up since 1973. I wasn’t happy about the lack of drums, but I could understand it.

But two in a row without drums? That trick’s a gimmick, Rick. You don’t need to beat us over the head with intimacy. Especially not when the songs are (once again) this good.

END_OF_DOCUMENT_TOKEN_TO_BE_REPLACED

The A.V. Club talks to Gary Louris about his new album, Vagabonds, and about trying to release the 1986 Jayhawks debut that’s never even been issued on CD:

Well, we did have the rights to the first record, but we sold it to Lost Highway with the idea they were going to put it out, and then it got stuck. So we should have hung onto it, at least for that part of it. But of course, the Jayhawks name is kind of stuck. Anything that’s released with the Jayhawks name is technically still under contract to Rick Rubin, so it’s not like we can just go start putting out Jayhawks records. We would still be begotten to our contract.

I’ve heard the album on vinyl (thanks, Vit!), and it’s good. Very, very Sweetheart of the Rodeo, but there’s nothing wrong with that.

END_OF_DOCUMENT_TOKEN_TO_BE_REPLACED

Glorious Noise reads the 8,000-word New York Times magazine feature on Rick Rubin so you don’t have to.

“The most important thing we have to do now is get the art right. So many of the decisions at these companies have not been about the music. They sign artists for the wrong reasons — because they think somebody else wants them or if they need to have a record out by a certain date. That old way of doing things is obsolete, but luckily, fear is making the record companies less arrogant. They’re more open to ideas. So, what’s important now is to find music that’s timeless.”

Actually, you should still read it. It’s good.

The rest of the good quotes after the jump…

END_OF_DOCUMENT_TOKEN_TO_BE_REPLACED

Rubin Turns To Linkin Park, Weezer After Winning Buckets Of Grammys. Also: Metallica, U2, Dan Wilson of Semisonic, and The (International) Noise Conspiracy.

What, no old people?

Looks like Neil Diamond will be working with Rick Rubin again for his next album. Undetermined is whether it will be another album of originals, like 12 Songs, or whether it’ll fall back on the proven Johnny Cash formula of mixing covers of 90s alternative rock with obscure older songs.

“It depends on how long the writing process takes,” Rubin told Billboard. “I thought if it’s going to take a while to write, it might be fun to do a covers album in between, but we’ll see. The material is going to dictate everything.”

Previously: Shine On You Crazy Diamond.

Rick Rubin is not God. He has produced more than a few bad albums in his day. Yes, his early work the Beastie Boys, Run-DMC and Slayer is undeniably awesome. But after that, for every Johnny Cash record, there have been plenty of mediocre releases by the Cult and Red Hot Chili Peppers. And Weezer. The magic that he created on Cash’s 1994 American Recordings is not that easy to replicate.

He tried with Donovan in 1996 on Sutras but failed. I might be the world’s biggest Donovan apologist, but that album is just not that good. It’s out of print now, so most people will never even know. The problem was that when Rubin stripped Donovan down to his bare essence, all that was left was a sweet old guy singing boring (but pretty) ballads that didn’t really go anywhere or make you feel anything.