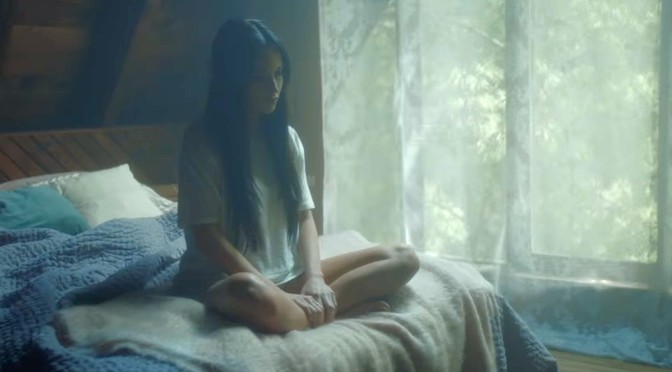 Musgraves is still a clever lyricist and inserts a comma between the words of the title:

You can have your space, cowboy
I ain’t gonna fence you in

“Space Cowboy” is the only song on Golden Hour co-written by the trio of Musgraves, Shane McAnally, and Luke Laird, who co-produced and co-wrote most of her first two albums. The new album is a bit of a change in direction from her classic country sound (vocoder! disco! yacht rock!), but with this song she’s throwing her original fans a bone.

I’ve loved her since I first saw the video of her performing “Follow Your Arrow” at the 2013 CMA Awards. I could hardly believe that this young woman in an adorable little daffodil dress was encouraging a mainstream country audience to roll up a joint and kiss lots of boys “or girls if that’s what you’re into.” She gave me hope for the future. That album, Same Trailer Different Park, is still one of my favorite albums of the decade. Every song on it is a short story with a cast of complex characters and surprising plot twists.

I’ve listened to the new album a few times now and I’m proud of her for drawing more critical attention, and I hope she sells enough albums to continue to keep doing this for as long as she wants. She’s an artist who’s certainly earned the right to follow her muse. Maybe it’ll grow on me but a lot of it reminds me of those obscure songs you hear in positions 25-40 when you’re listening to old Casey Kasem shows on the ’70s channel. It always blows my mind that there are still Top 40 hits from my childhood that I’ve never heard. But mostly they’re just boring or weird or bad. They’re songs that are fascinating to me as a snapshot of an era but make my wife say, “What is this shit?” Golden Hour isn’t boring or weird or bad, but it still hasn’t hooked me like her early stuff. But hey, at least it doesn’t sound like Dean Friedman (peaked at #26 in 1977).

END_OF_DOCUMENT_TOKEN_TO_BE_REPLACED

It’s no secret that GLONO is a haven for Neil Young idol worship. Most of us are of an age where our foray into Neilvana was sparked by a single event. In the fall of 1989 Neil Young was the musical guest on Saturday Night Live and unveiled before a country mired in Reagan-Bush malaise a song that shook us all to our core. As we recover from another Bush era, remember to Keep on Rockin’ in the Free World.

Harp has an excerpt from All Over But the Shouting: An Oral History of the Replacements:

Bob Stinson: It was ’86 and we were doing “Saturday Night Live,” staying at the Berkshire Hotel. I caused all the trouble on that one: I broke the phones, put a hole in the door, threw an ashtray out the window. Lorne Michaels put food and flower baskets in our rooms, free bar tabs–we went to town. I think I’d have to say I abused it more than anybody. They swore no band from Warner Bros. would play on that show again unless we paid the tab on the $1,000 worth of supposed “damage” we did.

All Over But the Shouting is due November 15 from Voyageur Press.

END_OF_DOCUMENT_TOKEN_TO_BE_REPLACED

I’ve been Tivoing Saturday Night Live for a few years now, which renders it entirely watchable. Justin Timberlake was great the last time he hosted, and this time I was sad that Jimmy Fallon was no longer in the cast because the “Barry Gibb Talk Show” sketches had been so funny. Lo and behold, they brought Fallon back for the sketch (he probably wasn’t super busy).

Anyway, thanks to NBC and YouTube, you can watch the highlights after the jump, including the uncensored version of A Special Christmas Box…

END_OF_DOCUMENT_TOKEN_TO_BE_REPLACED

The season premier of Saturday Night Live is always a bit sketchy (pardon the pun), especially when the show is in a “transition” year and has cut some cast members. This year’s debut was an exercise in “almost.”

This week’s host, internet comedic phenom and chronically over saturated Dane Cook, was almost funny. His monologue was a four-minute sample of his stage show, which is full of near clever observations and all but engaging physical comedy. The first show of the season sets the tone for the year. As the host for the season opener, Cook was…well…less than.

And then there was musical guest the Killers. Front man Brandon Flowers was decked out in a creepy moustache and oddly well-fitted western wear that seemed to be ripped right from the cover of the latest Urban Outfitter catalog. Jerking around and singing almost on-key, Flowers seemed to be trying a bit too hard to be weird. Crsipin Glover, he ain’t, lo though he tries.

If Saturday’s show is any indication, we may be heading to another dark chapter for the longest running comedy sketch show on television. Countdown to the obligatory SNL deathwatch: five…four…three…