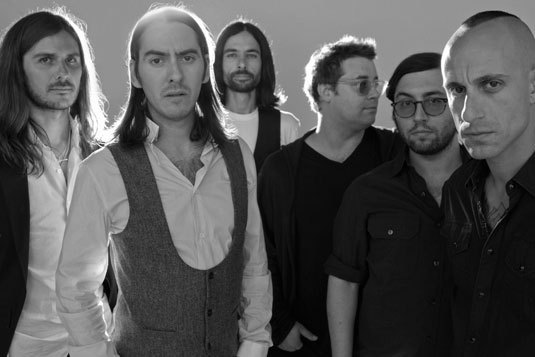 Getting to see the same people every year is fun. You make friends through the years and it becomes kind of like summer camp or something.

If it doesn’t rain it’s a dustbowl, and if it rains it’s a mudslide. Kind of a no-win, but you get used to it.

Definitely. Over the years I’ve attended Coachella and Lollapalooza as a fan. Chicago is my hometown so it’s a good excuse to go home and see friends, and Coachella is basically a mass Los Angeles exodus to the desert.

Dhani, because he gets pukey on the bus.

Well, I pay a monthly subscription to Spotify so that’s typically how I get new music, however, I’ve been buying up a bunch of old records. I think the last one I bought was “Toto IV.”

I was born and raised in Chicago so I have a very special place in my heart for the city. I am still a pretty big Cubs fan, so going to Wrigley Field in the summer is just about the best thing in the world.

We’re just getting started with touring on this record, cause it’s just now coming out. The past 6 months we’ve been in the studio so it’s been fine so far. I do hope we make it back to Chicago before the end of the year, so hopefully the 3-month thing won’t mess that up.

We hope we can get to you guys soon, we’re planning on touring the US whether it’s this year or next…we haven’t forgotten about you!!

Really promising young singer. I think he’s got a real shot at making it!

thenewno2 – You Are Here (Vagrant distro)

END_OF_DOCUMENT_TOKEN_TO_BE_REPLACED

AOL/Spinner is streaming the following albums through Sunday, April 5, so listen while you can.

• ‘Live in London’ by Leonard Cohen