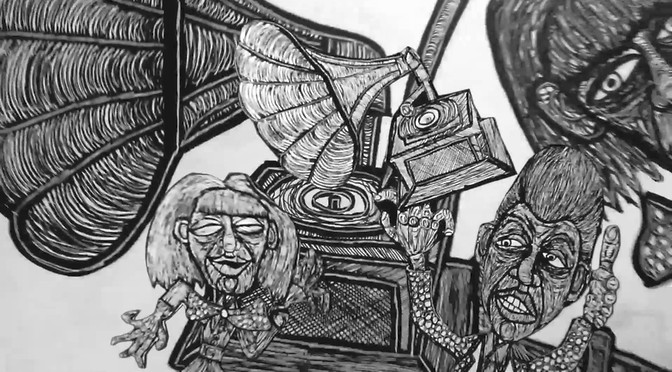 Video: Micah Schnabel — “The Interview” Micah Schnabel "The Interview"Watch this video on YouTube The internet is failing me lately. I didn’t realize that Micah Schnabel of Two Cow Garage had a new solo album out until I heard a song on satellite radio in the car. That’s not how this is supposed to work, … END_OF_DOCUMENT_TOKEN_TO_BE_REPLACED

Video: Have Gun Will Travel – “Thirteen Miles to Empty” This video is pretty funny. Micah from Two Cow Garage plays the grouchy bus driver while the band sings of the joys of a cross-country touring. The vocals might seem a little put on at first, but they’re from Florida so I guess they can … END_OF_DOCUMENT_TOKEN_TO_BE_REPLACED

Watch the irresistible new video from the upcoming album, Sweet Saint Me.

Two Cow Garage‘s Shane Sweeney talks to (614) Magazine about touring non-stop for eight years, including their recent jaunt with the Hold Steady: [H]e told us of one of his favorite moments on tour, when he turned to the Hold Steady’s bassist Galen Polivka one night on the bus after the show, quietly thanking him … END_OF_DOCUMENT_TOKEN_TO_BE_REPLACED

I briefly met Michael Dean Damron when he opened for Two Car Garage at Dante’s in downtown Portland. He’s a great hairy beast of a man who leans into the mic as he belts out dusty ballads and scornful tales. He rides close to his heroes, including Steve Earle, Alejandro Escovedo, Townes Van Zant and … END_OF_DOCUMENT_TOKEN_TO_BE_REPLACED

We get a road report from one of our all-time favorite bands and find out if it’s still worth it.

Suburban Home/Vinyl Collective has announced its new Under The Influence Series where they’ve asked several bands to record cover songs that have influenced their songwriting. They’re being released as split 7″ singles that will include coupons to download mp3s. Cool idea. So far they’ve got Mustard Plug covering Fugazi, Bomb the Music Industry! doing Pavement, … END_OF_DOCUMENT_TOKEN_TO_BE_REPLACED