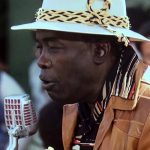 Damn, man, John Lee Hooker died yesterday. To me, this guy was the true king of blues, an artist that recorded some of the most amazing music I’ve ever heard. (Yes, even his stuff with Canned Heat.) An inspiration for anyone who ever played guitar. A Detroiter. Another one bites the dust, another hero of the great era in American culture gone. It makes me wonder what we will have left to mourn when I become an old man. Will I get this knot in my stomach when I hear that Sting kicks? I doubt it.