I’m a big fan of Matt Sharp and the Rentals. I have been since I heard “Friends of P.” on the radio back in 1995. It amazes me today to think that a song that quirky and great got played on commercial radio, and actually spent three weeks on the Billboard Hot 100 Singles charts. Much to the disappointment of Maverick Records, this did not cement “new wave” as the next big thing, post-grunge. Nevertheless, Return of the Rentals has earned a place in my personal Top Ten Albums of the 1990s. I really liked the long-overdue follow-up as well: 1999’s Seven More Minutes, but it was completely overlooked by everybody, and for a while there it seemed like Matt Sharp had fallen off the face of the earth. Web sites started popping up that were dedicated to Searching for Sharp, and we even hosted one here on GLONO for a while.

When Sharp’s old band, Weezer, released its lousy follow-up to their brilliantly raw and damaged Pinkerton, many disappointed fans blamed the boringness on the departure of Sharp. What else could explain the almost complete lack of risk and excitement on 2001’s green album? So where do we find Matt Sharp at the end of 2002, but on his way back from Leipers Fork, Tennessee, where he recorded a new album of stripped-down material, which he intends to release in 2003 even though he currently doesn’t have a label. But that didn’t stop him from playing a great show on Sunday night at Schubas. 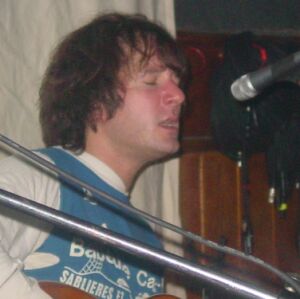 An all-ages show in a Schlitz bar on a Sunday night is bound to have a strange vibe no matter what, and this was no exception. Before the show, the entire floor of Schubas was packed with kids sitting Indian-style, just waiting. Everyone was given a free Matt Sharp t-shirt at the door. Before they started playing, Sharp and his accompanyist, Josh Hager (of the Elevator Drops), invited the first several rows of kids to come up and sit on the stage right in front of them. After explaining that they’d be playing a lot of new stuff, and that everything was going to be pretty mellow, they kicked things off with “Goodbye West Coast,” a new song that set the tone for the set: slow, pretty, acoustic songs with good-spirited jokes and stories in between. They played a total of 14 songs, divided equally between old and new, and the older songs were given sparse new arrangements. Josh Hager switched back and forth from lap steel to twelve-string, occasionally adding a quiet harmony or a subtle harmonica part. The 150-person crowd was perfectly silent during the songs, and responded enthusiastically after each song; there was no heckling, and I actually felt uncomfortable when I cracked a can of Hamm’s…between songs! After inviting the audience to sing the background vocals if we knew them, Sharp quipped, “Ain’t got no girls, ain’t got no moogs… Blues for the new millennium.” The pretty girls and the vintage synths defined the Rentals, and this Matt Sharp solo thing is a new deal altogether.

Most of the new songs ranked right up there with the classic Rentals stuff. “Let Me Pass” is a new song written to the doorman “at one of those clubs with the velvet rope.” Sharp told about waiting in line to get into this club where he was supposed to meet some girl, and he admitted even pulling “the Weezer card.” Punchline: it didn’t work. He played a “Cokehead Christmas Song” that was sad and funny. “January’s Girl” sounds as good as anything he’s ever written. Of the new ones, only “Everytime in Blue” really fell short, and maybe that’s just because if you’re going to call a song anything “…in Blue” and if it sounds even remotely like Bob Dylan, it’s going to get compared to “Tangled Up in Blue,” and let’s face it, ain’t nobody going to write a better song than that.

We talked to him for a bit afterwards. He told us that people have been giving him a lot of shit because of the Glorious Noise interview with Cherielynn Westrich. I couldn’t help wondering if that’s why he introduced “My Summer Girl” by pointing out that Cherie wrote the lyrics for that song. Still, you’ve got to wonder whether someone who’s obviously concerned with proper songwriting credit will practice what he preaches.

Sharp told Glorious Noise that he would like to release his album on a mid-level indie, but he’ll release it himself and sell it at shows and online if necessary. He mentioned being friends with one of the guys in Guided by Voices, and that he would really love to put it out on Matador. He told us that his previous experience with a major label was “nuts,” and that the label execs really expected the Rentals phenomenon to be much larger than it was—that they really were counting on a huge new wave trend, and when that failed to happen they put all their money into Prodigy. No matter what, he insisted, the new album is going to come out in 2003.

In the meantime, he is offering up some old, unreleased outtakes and alternate mixes of Rentals mp3s via his official website. (That site, by the way, started out as a fan site on geocities, which Glorious Noise offered to host here because we were tired of the madatory pop-up ads; it’s now on its own.)

Update: We’ve extended the deadline until December 20, and we’ve clarified the entry requirements.

We’ve got an autographed Matt Sharp t-shirt to give away to the person who writes the best GLONO-style essay in 500 words or less paragraph about why they love the Rentals. Browse through the archives if you’re unfamiliar with our style. The subject can be anything you’d like to write about, but extra credit will be given if you can work the words “moogs” and “girls” into your essay somehow.

by December 20, and we’ll announce the winner sometime around New Year’s Eve.