Well, what can one say about a city with the largest new and used bookstore in the world, five record stores, a coffeehouse bumping Eazy E, a vintage toy store (with plenty of G.I. Joe, Star Wars, and Shogun Warriors figures), 2 comic/book/zine stores, a pizza by the slice place, a thai restaurant, and the world’s smallest brewpub within a 2-block radius? If you’re like me, you head over to the post office for one of those change-of-address forms.

“How coarse! I shall dot off a quick letter to the editor-in-chief of this publication, and never breach its covering papers again,” I hear some of the more sensitive and choleric readers think to yourselves. Let me assuage your fears — Glorious Noise has not been violently colonized by the mullet wearers of the world. And I agree with you: “porn site” is such a harsh phrase. It is a term of oppression and bondage (not that kind). This site, Suicide Girls, is different. It could be better described as a community of young punk girls who are occasionally photographed in states of undress, and the people who love them. The site’s FAQ puts it even better:

SuicideGirls is a website dedicated to creating a new kind of adult entertainment, where the models who reveal themselves on the site are in charge of their own image and how they are presented. A collective co-op of adult entertainment with a thriving community, SuicideGirls is empowered erotica, a place where girls outside of mainstream culture can make the case that rebellion, a unique personal style and nonconformity is far sexier than anything you will see in mainstream pornography.

Damn straight. Besides, the bands The Exploding Hearts and the Epoxies were playing the anniversary party as well.

I arrived at Dante’s, a club on E Burnside, the main downtown thoroughfare, early in the evening with just the right amount of a beer buzz. After a little extra scrutiny for my Michigan driver’s license, I entered. Dante’s is decorated in a very tasteful black and red motif, the bar underlit with red fluorescence, a painting of a reclining female nude on black velvet over the bar, and an open fire pit next to the pizza slice window. The space was becoming crowded but there was still enough room to squeeze in at the bar and order an IPA. I overheard the bartender tell another patron, “Sorry, we don’t sell Budweiser,” as sure a sign as any that we were not in Kansas. The Exploding Hearts finished tuning and slammed through a rapid warm up number before leaving the stage.

I spent quite a bit of time trying to match the tattoos on display with the screennames from the site. They kept packing them in, and there were more than a few recognizable faces and forms, all of which much cuter in person. “I’m going to go bald before midnight!” the guy next to me at the bar exclaimed, as he mimed pulling out fistfuls of hair. Mikey from Vancouver Washington, who’s known on the SG message board as “redevilittlevil” and who describes himself as an “adult Harry Potter,” told me why he was out showing his support. “It’s local. It’s nice to meet people with the same interests.” He also wanted me to mention that he sells henna tattoos on ebay, most recently the Metallica logo. I was distracted from continued conversation by a vision in a white angora halter top and bleeding butterfly tattoo…

Wha? Oh yeah, back to the article. The Exploding Hearts took the stage with a bang. They sounded like a Combat Rock-era Clash, and the lead singer even affected a slight British accent as he sang. They looked the part as well. Elbow to elbow at the bar, I thought they put on a good set for the still swelling crowd. 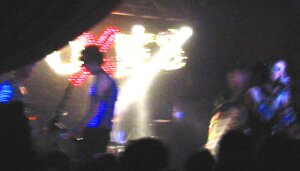 DJ Ride, barely visible in the high dj booth in the corner spun Misfits tunes as the Epoxies set up on the darkened stage. Roxy Epoxy had a wide piece of masking tape over her mouth as she moved equipment on stage. Terrycloth elbow pads were secured with electrical tape wound round. Safety pins held her outfit together. Her eye makeup glowed green in the black light, haloed by wild pony tails. The keyboard player had wrapped himself in yellow police caution tape. He launched into a brief keyboard warmup that sounded like something off of Rush’s Moving Pictures, and stood ready.

Well, I’m sure you’re wondering, dear reader, if the Epoxies backed up their formidable appearance with an equally direct performance. I can perhaps best put it this way: I’ve always liked X, and wished I could have seen them in their LA punk scene heyday. Now that I’ve seen the Epoxies, I no longer have that regret. From the on stage moves (damn, that Roxy can move!) to the guitar strap strobe, they were everything you need in a punk band.

A real rock journalist would start lying at this point, talking about semiotics and obscure bands and the like. I, however, possess no such credentials.

At this point, my notes become garbled and illegible, due as much to the beer consumed as to the crowded conditions and the rockin’ show. As a final word on the Epoxies set, my notes read “19 million spits (?) seattle dingeberry if you hadn’t heard them.” I don’t remember if it’s a quote or a just random thought, but it’s sound advice worth considering.

After a short introduction and thanks from Missy, co-founder of the Suicide Girls site, a master of ceremonies took the stage. “Who here likes Hole?” The Suicide Girls had recently appeared on MTV with Courtney Love. Everybody booed. His warmup having gone down in flames, he introduced the first girl and exited.

The performances by the Suicide Girls were far more burlesque than bump and grind, and each was a unique expression of their personal style. Violet danced to a Betty Boop song, Echo did flame tricks, and Claudia bellydanced. In between sets, if required, a stagehand erected a 12 foot tall pole in the center of the stage with a cordless drill. Lux even went so far as to erect a small altar complete with Devil statue, rat skulls, and candles, including a particularly stubborn one that wouldn’t stay in its holder. It’s true that they all got at least a little naked, but then again, how naughty can it be when Veronica gave away pink frosted cupcakes from the stage? By far, though, my favorite performance was by Mia, who took the stage in head scarf and eyepatch, and danced to a pirate song that was half punk, half Pogues, and had me yelling “Arr!” and pounding the stage planks with all the rest of them. When she tore apart her striped shirt, she revealed black electrical tape pasties and tattoos.

After the last of the glitter and ripped fishnet hose had been swept from the stage, I had only one thought on my mind: the 2nd annual Suicide Girls anniversary party. I never did get the t-shirt I paid for though, but that’s cool, it’ll go to the Suicide Girl Army, which will be coming to your town before you know it.

Several Epoxies MP3s and a video are available from the band’s website.

19 thoughts on “Celebrating with the Suicide Girls”