Clem Snide is the greatest…

a) Pop band in the world

b) Bar band in the world

d) All of the above

Clem Snide is a band people can obsess over, and many do. Fronted by the impossibly witty (and nearly as good looking) Eef Barzelay, Clem Snide mixes elements of pop, indie rock and Americana to create a sound immediately recognizable as their own, and that’s rare in a world of imposters. When a band like this comes around, people who obsess over music, like me, will do what it takes to catch them live and see if they live up to the glory they pressed into vinyl.

The Abbey Pub in Chicago is one of those venues that makes you pay for what you get. Not just the cover, mind you, but the actual process of getting in can be excruciatingly long, especially with the wet wind of early April kicking up. One bespeckled guy with comically thick glasses at the door checking every ID, every credit card (for online ticket purchasers) and every red cent of cash changing hands made for a two or three minute transaction per person. Figure on 250 to 300 people at the door and you can see how long you’re gonna wait in the cold.

But we got there early and suffered through two completely forgettable opening acts who labored through their sets to a mostly un-attentive crowd. I have sympathy for opening acts but not much patience. 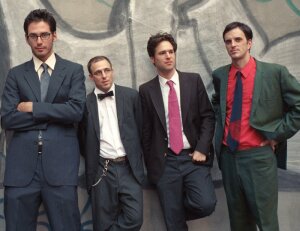 Finally Clem Snide took the stage and opened with “Let’s Explode,” (incorrect, see comments—ed.) which is also the opening number of the fantastic Ghost of Fashion. The band’s been getting some attention of late. Their song “Moment in the Sun” is featured as the theme song to NBC’s “Ed” and they made countless critics’ “Best of…” lists in the last few years. But how many bands get critical acclaim and press attention only to let you down live? Clem Snide backs their material with a live performance that’s as good as a money-back guarantee. The era of live performance is making another cameo and Clem Snide is a star attraction.

The sound was great, to the Abbey’s credit, and the band was tight. Guitarist Pete Fitzpatrick painted the songs with imaginative guitar work incorporating violin bows (decidedly NOT like Jimmy Page) and drums sticks on strings. Picking up the Banjo, Fitzpatrick infused electro-hillbilly noise elements to the already unpredictable song structures and twists of phrases that have made Clem Snide the beau of all indie rock balls. Eric Paull and Jeff Marshall make up the rhythm section and gave the band enough push from the rear to keep bounce hipster heads throughout the set. And the hipsters were out and vocal as usual.

Chicago is known for heckling. It’s just the way it goes. From riots in Grant Park when the MC5 spouted too much talk and not enough rock to Ryan Adams’ public tantrums when unoriginal mooks request “Cuts like a Knife” at the hyper-sensitive alt-country balladeer’s shows. It’s our heritage and if you’re in a band and you come to Chicago, you better come heavy.

With over ten years of road training under their belt, Clem Snide is well adapted to handle the friendly jabs and biting remarks of skeptical crowds. They easily managed the Abbey Pub with engaging banter, a laid-back demeanor and enthralling performance. That’s a bit flowery, I know, but this was a show that surprised me — a big fan of Clem Snide — with an agility I didn’t anticipate. Note: when confronted with the inevitable and painfully boring “Play Freebird!” the band simply plowed on, ignoring the plea entirely. But it wasn’t lost on the band and to prove it they ended their set with a version of Skynard’s “Simple Man” that stripped the song of its anthemic bravado and transformed it into a Sonic Youth outtake. That takes balls and Clem Snide’s got ’em.

It would be easy for Clem Snide to rest on their critical accolades and Eef’s good looks, but this is a band of substance and that is worth more than “Best of…” lists or panties in the footlights. Well…

The answer to the above quiz in next week’s GLONO.