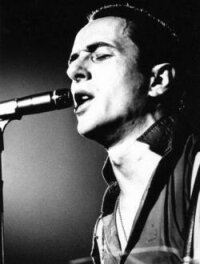 Joe Strummer is dead. If you don’t own the first Clash album and London Calling, you need to go out and get them right now. The Clash were, hands down, the greatest English punk band.

I happened to catch the Westway to the World documentary on MTV2’s otherwise insipid “25 Years of Punk” celebration a couple weeks ago, and that combined with our recent correspondence with Pennie Smith inspired me to bust out my two favorite Clash albums. London Calling was actually still in my Walkman when I woke up this morning and heard the news. It still is and probably will be for a while. It’s one of the best albums of all time.