If I could stick a knife in my heart
Suicide right on stage
Would it be enough for your teenage lust?
Would it help to ease the pain? — The Rolling Stones

There’s a term in boxing that describes the kind of fighter who will never get a shot at the title, never make the big money and slightly more often than not lose the fight. Club fighters make their living by facing better opponents night after night and getting their asses kicked. The one thing most Club fighters have in common is heart. They go up against tough odds night after night for the meager paycheck and the love of the sport. Brian Jonestown Massacre leader Anton Newcombe may have lived a past life as a Club fighter. 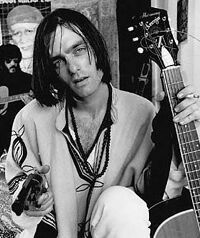 BJM took the stage at Schubas last night in front of a Chicago crowd equal parts hipster and meat head hell-bent on heckling and drunk on the anticipation of indie rock’s chief historian of classic psychedelic folk/rock. Since 1991, BJM has put out stunning records reminiscent of the Stones’ Satanic Majesty’s Request and Rod Stewart-era Faces. The band’s reputation for explosive live performances precedes them at every tour stop. Chicago was no different and that initially worked against an ailing Newcombe, too sick to sing properly but displaying the heart that makes real rock worth it all.

After nearly 25 minutes of noise jam, Newcombe addressed the audience and told them he couldn’t really sing and anyone who had problem with that could get a refund (albeit, only a 1/3 refund). He then promised to do his best and entertain those who stayed. And entertainment like this can’t be found on E Television.

Frustrated with the guitar volume on stage, Newcombe ordered his band to turn down, which they dutifully did — but not enough. At the start of the next song, Newcombe screamed to “fucking turn down so I can sing!” At which point he proceeded to attend to the task himself and turned down lead guitarist Jeff Davies’ amp. Davies took issue with the pull of rank and tried to turn back up, which sent Newcombe back to his cohort’s amp for more fine-tuning. This went on throughout the entirety of the set and threatened to derail the performance. For the first half hour of the set, Newcombe’s voice continually failed him and his temper flared. To some this may sound like the amateur antics of a mediocre bar band, but to those of us who believe in rock and roll and the power of live performance it was a display of dedication and just like a seasoned club fighter, a dedicated Rock band can be dangerous.

At some point the crowd divided. Drunken knuckleheads who too often are showing up at hip shows stepped up the heckling and one moron threw a full beer at the band. And that was the turning point of the show. Just as a fighter can snap-to at the sting of an unexpected overhand right, the Brian Jonestown Massacre came together and took on the idiots among us. The drunken bottle thrower got slapped around a bit and escorted out of the club — by his none-too-pleased girlfriend — and Anton introduced a song called “Johnny Marr is Dead.” Guitars growled and the rhythm took hold. The band was off and continued to rock the crowd for another hour.

Newcombe’s voice never did come to his rescue but the Massacre’s rhythm section did. The rhythm section makes or breaks a good band and can save the life of a limping performance. Last night the Brian Jonestown Massacre rhythm section held steady a constantly fluxing show with deft drum fills and throbbing, melodic bass lines. All Club fighters have a punch that can take out the best contenders, that’s how they stay in the game. BJM’s sucker punch is the rhythm section.

And like those of the best Club fighters, it wasn’t a perfect performance, but that’s the point. In a world where digital manipulation of tones and click track drums can suck the soul out of any song, the Brian Jonestown Massacre slugged its way through perfectly crafted pop tunes and space jams and for two hours last night saved rock and roll.

You can relive this show on the Digital Club Network.

12 thoughts on “I know it’s only rock and roll”