Inspired by the discussion on the GLONO bulletin boards, we asked frequent poster Joshua Rogers to take a deeper look at music in video games in this GLONO Feature article. – ed.

The inspiration for Glorious Noise is how rock and roll can change your life. I’ve been given an opportunity to describe how rock and roll has changed video games, and thusly the lives of those of us who partake of them regularly (read: chronically).

In the world of video games, music was once little more than a series of notes to add a little style to the title. Aside from the chunky tones of a rumbling engine or the classic sine-wave sound of a laser blast, the processors didn’t have the capacity to produce remotely moving music. Well, the technology has changed as much as the cultures that use it, and gamers are finally treated to playing with music that is truly part of an immersive gaming experience.

The oldest function music serves in gaming is to set the mood. From the twittering tones of “Dig Dug” to the familiar swing of “Super Mario Brothers,” music has always provided the game that extra bit of atmosphere that it needs to remain memorable (remember the relentless heartbeat of “Asteroids?”). Today, gamers are treated to a limitless palette of music that is capable of conveying a very specific image. The score behind “Medal of Honor: Frontline” is as similar in theme to that of “Saving Private Ryan” as the visuals are, sections of the game having been modeled after scenes in the film. The film composer Harry Gregson-Williams (Enemy of the State, The Replacement Killers) wrote the music for the action-espionage powerhouse “Metal Gear Solid 2: Sons of Liberty,” giving the game a genuinely cinematic feel. (Gamer trivia: The voice of MGS2’s hero, Solid Snake, is performed by David Hayter, who plays the English voice of Spike in the popular anime Cowboy Bebop, who as well as wrote the screenplays for the X-Men movie, its upcoming sequel, and The Scorpion King – but let’s not hold that last against him. He’s dreamy as Snake.)

As technology advances and as professional musicians become more involved in game production, we’ve seen a wonderful extension of this first function of music – the ability for the music to change with the gameplay, offering constant feedback on how you’re performing and what is going on around you. Mixmaster Mike held the musical reigns on “SSX: Tricky” (a snowboard racing game with characters featuring the voices of Bif Naked, Macy Gray, Jim Rose, David Arquette and others), and while racing, the music constantly mixes and re-mixes depending on how well you do. Pull off an übertrick (the game’s term for a dope big-air fantasy move) and the music will explode on landing with a souped-up mix. Blow the same stunt, and you’ll find yourself face-down in the snow with little more than a backbeat supporting you. The Xbox juggernaut “Halo” has further redefined interactive music, its score having so many variations and transitions that by the time you’re halfway through the game, it’s possible to tell what alien opponents are nearby based on the progression of the score alone.

This is when you find yourself “playing by the music.” It’s quite common in driving games to be highly responsive to music; a hard-hitting razor rock tune gets you leaning into the set and driving as hard and fast as possible, while a pop song might sway a player into driving technically with more style (which also makes for better replays). I was just enjoying some “Tekken 2” with friends recently, and we had an old Dvorak record on the turntable. The fights were punctuated with intense moments of attack and counterattack and stretches of strategizing and maneuvering for position, all incomprehensibly timed to the swells in the concerto. The technology in “Halo” allows the game to build different layers and themes, and merge seamlessly between them as your situation and surroundings change – the music nearly nonexistent when alone in an empty landscape, the taiko drums will come up followed by waves of low strings as your enemy, the Covenant appear in the distance. Engage them from a distance and the music will get tense, but stay subdued – and when fighting at point-blank range, the orchestra rings in your ears. At last we have the music responding to our playing as much as the player follows the music.

Rhythm and music are increasingly becoming the focal points of games themselves. Long before the “Dance Dance Revolution,” uh, revolution hit Stateside, Playstation owners were howling with glee over the antics of PaRappa the Rapper and his assorted dance teachers. (Gamer trivia revisited: “parappa” means “paper thin” in Japanese, referring to the two-dimensional nature of the characters. I don’t know what Um Jammer Lammy means in Japanese.) Now, in addition to the demoralizing array of dance games, we have some really spectacular ideas coming in the form of games like “Frequency” and my personal favorite, “Rez.” The game takes the simple concept of the rail-shooter and choreographs everything in the game to techno soundtracks that are unique to each level. You don’t have to have rhythm to play the game, but if you can fall into the groove with the music, you perform better and score higher. Creative ideas like these are redefining what gaming is with dazzling eye candy and rich digital surround sound. (The PS2 has a standard optical digital out and the Xbox a proprietary optical digital out, both offering Dolby Digital 5.1 or DTS decoding, but the GameCube offers only analog Dolby ProLogic II.) 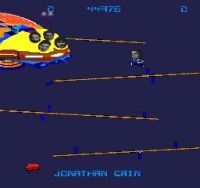 One of the oldest activities of game designers trying to add life (and credibility) to a title is to license music. From 1983’s “Journey,” featuring the band of the same name to present, putting popular music in games has been a sure-fire way to attract attention. “Gran Turismo 2,” the GT racing sim that set the standard for the genre, had a soundtrack featuring dozens of licensed work from bands like Soul Coughing, Garbage and Cake. The practice of licensing is growing all out of proportion these days, what with the homogenization of various media under the rule of a select few corporate overseers, to various ends. On one side, we have products like “Britney’s Dance Beat” or “Malice” – an upcoming Xbox title featuring the delectable but annoying Gwen Stefani as the voice of Malice, a hammer-wielding girl with pigtails. Other No Doubt members will provide other voices in the game, and it will feature several of the band’s songs. On the other side – and this is the side I enjoy – we have games that throw more licensed music on the disc than game code, and allow you to do what you like with it. Games like the GT series, the Tony Hawk series (“Pro Skater 4” will feature more than 30 tracks), and other titles typically in the sporting genre, put a lot of music in because just about anything goes with sports (besides, can you imagine playing an entire season of John Madden football with the same corny themes – shudder).

The granddaddy of all multimedia licensing and marketing feats is to be seen in the soundtrack release for “Grand Theft Auto: Vice City,” but since I’ve mentioned that in a message board thread, I’ll spare you retelling it here. What “Grand Theft Auto III” did for gaming music was to make it truly part of the environment. With a variety of selectable radio stations, each with its own format, identity and content, you can match the music to your mood or style – MSX FM for barreling down busy streets, K-JAH for picking up a “date,” and Chatterbox 109 when you’re playing cabbie ferrying passengers around. And talk about cross-media: there are hilariously fictitious ads on these radio stations for pets, video games and weight loss which you can then actually visit on the web. (Sadly, I don’t expect the same effort for Vice City, as it’s set in the eighties and dotcom addresses weren’t plastered on every billboard, stadium and high school in the nation back then.)

So what’s the next big innovation in gaming soundtracks? From where I’m sitting (usually in front of my 32″ digital surround system equipped with Sony’s Playstation 2, Nintendo’s GameCube, and Microsoft’s Xbox), it’s totally customizable soundtracks with your own music library. One of the coolest features of the Xbox is the ability to rip music from CD (commercially produced CDs only – no CD-Rs, thank you RIAA) to the internal hard disk for playback while gaming. Many games don’t take advantage of this feature for one reason or another, but the auto racing genre is lousy with ones that do. It sounds simple, but until you’ve raced the streets of San Francisco to music that’s your own, be it Ministry’s “Jesus Built My Hotrod” or Wilco’s “Jesus, etc.” you can’t imagine how novel it is to have your tunes in the game. Combined with reactive mixing, multi-channel surround, and digital effects, I expect audiophile gamers to have a lot to look forward to, even in this generation of consoles – the next will be something completely different.