April 23 sees the release of Wilco’s Yankee Hotel Foxtrot. The strain of making the album over the past year and a half has cost the band two members and a record label. Now, Wilco puts its trust in fans as it waits to see if anyone will buy an album everyone’s been able to download for months. Is it too much to ask?

Will the weight of trust be too heavy for Wilco and its fans?

Trust is heavy. It’s been said that you can only trust someone as far as you can predict his behavior. If you are pretty confident in the way someone will behave when presented with certain situations, then you know what your level of trust is. Given the past year and a half, the trust between Wilco and its fans has been through the wringer.

It started out so promisingly. On the heels of the much heralded and genre smashing Summerteeth, Wilco set out to once again push the envelope and test their fans who mostly signed on when the band was still the head cheerleader for alt-country. Summerteeth, with its Brian Wilson-esque production, indie rock song structure and lyrics that made Allen Ginsberg sit up in his grave, pulled the No Depression gang into Wilco front man, Jeff Tweedy’s strangely dark yet saccharine sweet world. Most of the old crew came along and many more new fans joined in. It was a success and Wilco was hailed as the Most Important Band in America. And so began the production on Summerteeth‘s much-anticipated follow-up. 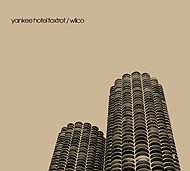 It wasn’t long before clouds gathered. Rumors leaked that the new album was all noise and no melody. Release dates were set and then unceremoniously rescinded. Ken Coomer, drummer for the group and an original member, was let go and longtime lead guitarist, co-songwriter and studio engineer, Jay Bennett, announced his departure from the band. To make matters worse, news broke that Wilco’s label, Reprise, had decided to release the band. Egad, had it all gone too far? Had the chemicals mixed and exploded? Had Wilco walked down the long dark hallway, never to return?

The days were dark, but not dismal. After all, the band had built a rabid fan base that was chomping at the bit to get new material. And though their trust in the band was being tested with long delays and sniping rumors, the legions waited it out knowing Wilco would eventually deliver. Maybe a single or some mp3 samples from the group’s website would soon be released to quell the grumbling from the groundlings. Surely the fans couldn’t have expected what they got.

In the midst of all that chaos, Wilco started streaming the album that had so many worried, so many scared, so many talking. And not just samples, they streamed the entire album, a true masterpiece and quickly named to countless critics “Best of 2001” lists. Mind you, this was an album without a label and no sign of a release date.

On and off for some six weeks, wilcoworld.net streamed the entire unreleased Yankee Hotel Foxtrot for free. While it’s unclear how many people heard the whole thing, thousands logged on.

“We did approximately 200,000 visits in September,” said wilcoworld.net Webmaster Ken Waagner, who added that high traffic forced the site to switch hosting companies. That initial surge of traffic didn’t immediately die off either.

But still, what drove Wilco to stream an album they were months from releasing in its entirety on the site? Waagner said there were a number of reasons driving the decision.

The fallout with Reprise was indeed a factor, perhaps to drum up hype for an album the band was now free to shop to other labels. But more importantly, according to Waagner, the band wanted to play material from the new album on tour.

“Which would have been hard to do had people not had a chance to hear the record,” said Waagner.

Another reason seems to be the inevitable leak to P2P networks. And though Waagner didn’t mention it, there may have been some concern at Reprise about the marketing strategy the band wanted to employ for the album’s release.

“Funny thing is we already had planned on streaming the record as part of the marketing plan for the release of YHF on Reprise,” said Waagner. “And then when everything went down, we were just sitting on it, figuring out what to do, and waiting for the dust to settle.”

That kind of accessibility to unreleased material is exactly what scares major labels the most about developing technology, and excites artists who feel an urge to express themselves directly to waiting audiences. But did Wilco have any reservations about allowing their fans that kind of access?

Not according to the band’s manager, Tony Margherita, who addressed the issue in a note to Wilco fans.

“As the April 23 release date approaches, together, we have the opportunity to prove a lot of people wrong by showing that trusting your fans and letting them hear your music via the internet is not the threat to the artist’s livelihood that some people in the music business would like us all to believe,” the note read.

Margherita went on to thank fans for sticking out the long haul and that their patience would be rewarded with enhanced content and “beautiful packaging” with the official release. He said that just because Wilco made their entire album available online doesn’t mean it has to hurts sales, which is always the label’s main concern.

But sales are not always an artist’s main concern, especially when many major label artists never see a dime of royalty payments from their labels. Tweedy has said he’s never once been paid a royalty, and this is from a man who’s been releasing albums since 1989. But money isn’t everything. There’s also the passion to create music, something some in the industry have lost site of and an issue Jeff Tweedy addressed in an interview with the Chicago Tribune’s Greg Kot.

“The impulse to make music is as strong as it ever was,” said Tweedy. “It was a way of reminding ourselves that making CDs is not our reason to exist. We’re a band because we like to play together, and feel good about playing in front of people, and we’ve always made our living doing that. That isn’t going to change.”

Still, money does matter and to say that record sales don’t mean anything to a band is just naïve.

“I think it is obviously a concern,” Waagner agreed. “But I also don’t think if the band had to do it over again, we would do it much differently.”

And just as Radiohead proved with its online strategy of their now classic and multi-platinum selling Kid A, there’s something to be said about good old fashioned hype, even if it is in the form of newfangled technology. Waagner said that the attention the band is getting has been overwhelmingly positive and that can only bode well for the album.

“The emails we got from people all over the world were incredible,” said Waagner. “And I think based on the press, advance promotion, etc. the record is very well ‘set up’ and hopefully people will go buy it.”

Wilco’s future is not at stake here. They will surely continue to make great music, but as the April 23 release date looms, many questions will be on the table. Is P2P file sharing the scourge of the record industry and will it lead bands to lives of destitution? Will the lure of packaging and additional content be enough to entice fans to buy an album many already have? Most importantly, can a band that streams an entire album still count on those fans to buy the finished product? Waagner, for one, understands that this is indeed a test.

“We really do look at this as an opportunity to prove that if used right, the Internet can help not hurt sales…now we just need the fans to help us prove that.”

Let us know what you thought of this article. Do you buy albums that you’ve already downloaded? Are you planning on buying Wilco’s new album? You can order it now. [Full disclosure: Glorious Noise makes a percentage of credit if you buy something via this link.]

And hey, speaking of Wilcoworld.net, remember when GLONO was one of only 12 sites on their links page? Remember that?

32 thoughts on “Speaking of Tomorrow, When Will it Ever Come?”