When Scotty Moore played the solo on “That’s All Right” six feet in front of me, I thought I’d died and gone to heaven. But then James Burton stepped forward and played his version of the solo and by the time D.J. Fontana got back into it, I may as well have been right there with The Lord and Elvis himself. I’d driven 1200 miles to see this show and if you’d told me I could never go home again, well damn, I might just have followed one of those guitar players back to their house at the end of the set. Trouble is, I wouldn’t have known which one to pick. 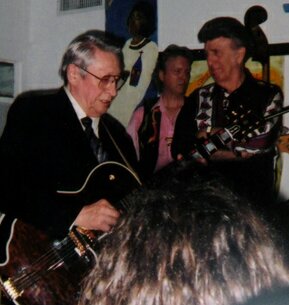 It’s at the root of the fundamental philosophical dilemma that faces every music fan: Fifties Elvis, or Seventies? This night, at The Ponderosa Stomp, we got both. This wasn’t a battle over a postage stamp, but a question of whether it’s better to burn out than to fade away. There is a third option and maybe only session musicians ever pick it, but there’s nothing wrong with keepin’ on pickin’, honing chops, and keeping the soul in your soul, the glide in your stride and the dip in your hip. Stripped of The King’s presence—no Hound Dog good looks or Liberace jumpsuits—the music came out unified, the circle unbroken, the genius and brilliance of rock and roll in all its various permutations across generations was undeniable.

Whether you were there or not, please thank The Mystic Knights of the Mau-Mau the next time you’re listening to some of that seminal roots music we all love so much. This gang gets the Eternal GloNo Seal of So Fucking Cool for bringing a three-day lineup together that may be unsurpassed by any event anywhere at any time for its audacious depth in presenting “the old time ‘it’s so funky I can smell a rat’ blues, ‘it’s so funky it will decapitate your head’ grooves, rockabilly ‘so raw it will scorch the earth,’ and real swamp blues ‘where the gators go chompin’ on polk salad.'”

I was only able to catch a single set of music on a single night; unfortunately, my real job got in the way of doing it up right. But the experience of seeing those three men rock out on the stage at the same time—and it sounded just as good as those recordings from back in the day, but better—was enough to make me feel something approaching religion.

One thought on “That’s all right now Mau-Mau”