While I had the good fortune not to have to go to war in Southeast Asia during my teens, some of my friends were not so lucky. (Luck, it should be noted, was involved because there was a lottery system enacted, but in its case, the “prize” wasn’t exactly the same as striking it rich via the Big Game or Powerball.) Many of the stories they came back with were too grotesque to contemplate—Coppola’s Apocalypse Now wasn’t an exaggeration or caricature, it seems. One of the things that invariably came up in their stories was the music in the bars.

Whether it was Saigon or Manila, there were bars catering to soldiers. So far as serving up the music went (there were, of course, other pleasures being served), the bands in the bars played Western rock and roll. These bands had apparently learned the songs they performed by careful attention to recordings. More than one of my friends said they were shocked when they heard, say, “Smoke on the Water” sound exactly like the Deep Purple recording. And while it is one thing to hear the same notes emerging from instruments, it is a significantly more gobsmacking experience to hear British or American vocals coming out of the mouths of non-Western singers.

But those bands knew what their audiences wanted, and they delivered.

One of the favorite bands, then and now, in the circles where “tribute” bands ply their music trade is The Doors. While there are undoubtedly far more people who pretend to be Elvis, the number of those who physically and audibly venerate Jim Morrison is non-trivial. (Someone, I suspect, has chased down the eerie parallels between the King and the Lizard King: both becoming bloated in late career; both buying it in a bathroom; both doubted to be dead…) 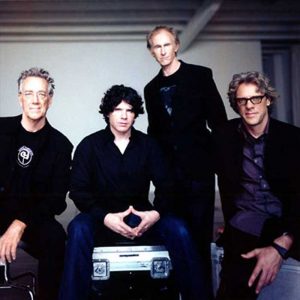 And now there is another tribute band, consisting of Robbie Krieger and Ray Manzarek, yes, of the original band, but Stewart Copeland on drums rather than John Densmore, Angelo Barbera on bass (hmm, the original band was a quartet), and Ian Astbury of the Cult filling the role of Morrison.

That’s fine. I’m sure that the original Doors can use some extra funding. But fundamentally, a “band” is a creation whose sum is greater than its parts (even if its lead singer had a predilection to some times pull out one of his parts on stage). But the parts are essential to create the whole. And absent those parts, it ain’t nothin’ but a tribute band—and not as impressive than those bar bands of yore, even if they get each and every note and nuance right.