Samorama is the reigning queen of all things Tweedy. She’s seen more Wilco and Tweedy-related shows than you ever thought happened. Here, Glorious Noise presents her account of the much ballyhooed Golden Smog reunion last week in Minneapolis. These tickest were damn near impossible to get, but you can bet where there’s Tweedy, there’s Sam.

The secret to getting in to Thursday’s Golden Smog show at Minneapolis’s tiny 400 Bar was to buy tickets early, ask questions later. Nobody knew what the lineup was going to be, and rumors abounded right up to the night of the show. Golden Smog is the supergroup made-up of members of Wilco, the Jayhawks, Big Star and Soul Asylum and they haven’t all played together in years. When the doors opened around 8:30, the line of people wanting to get in was much longer than the line of people who were getting in, and offers of up to $300 were being made for pairs of tickets.

Scheduled opener Betty was bumped in favor of Kraig Johnson and The Program, which featured David Poe, Jim Boquist, Peter Anderson, Ed Ackerson. I really can’t imagine being the opening act for a band like Golden Smog, but these guys certainly pulled it off. The Program started out with a sonic bang, with a few big rocking numbers. It’s hard not to rock with three guitars on stage. Unfortunately they wound down into some mellow numbers, which left the crowd a bit restless.

The Smog took the (tiny!) stage around 11pm, and opened with the rather obvious “Looking Forward to Seeing You” featuring Kraig (hardest working man in Golden Smog?) with violinist Jessy Greene assisting on vocals. It was the first time in many years that all six who played on the full-length releases were on the stage together again, including Big Star drummer Jody Stephens. Frontman duties rotated throughout the night, so it was difficult to keep track of who played what and when. Jeff Tweedy was seen on bass, Dan Murphy on keyboards…even Mark Perlman got to sing lead on Roxy Music’s “Love is the Drug”, when he wasn’t playing bass or mandolin. 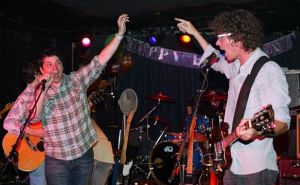 Photo by Jeff WheelerAll the rocking numbers from the two albums (Down by the Old Mainstream, and Weird Tales) were featured, slowing down only for “Making Waves” and “He’s a Dick” really. Murphy’s girlfriend, Melissa, who was celebrating her birthday that evening came up and sang lead on a few. It’s not likely she’ll be on any reunion albums, but maybe it’s just because she didn’t project her voice. Louris sang the “cheesy” (his words) Elvin Bishop classic “Fooled Around and Fell in Love” which he promised to never play again.

The defining moment of the show had to have been “Until You Came Along.” Jim Boquist came out and played guitar, Tweedy sang backup, and literally carried Louris at the end as they embraced and he just sort of ended up straddling Tweedy. Those two came back for the encore and played “Radio King” and “Please Tell My Brothers” along with Greene, and then the rest of the group came back out for a final rock out which ended with a cover of Classic IV’s “Spooky.”

It was great to see guys who are either selling out huge venues or not getting seen much at all anymore playing in a tiny club and having a great time. They were by no means tight, but the enthusiasm more then made up for that. If only it would lead to a new album…

5 thoughts on “Golden Smog: In A Barroom, Patrons Singing…”