A recent New York Times article discusses the recurrence in our culture of melodrama and earnestness, especially since 9/11. The writer was focusing on recent movies like “Far From Heaven,” that despite appearances, have steered away from ironic distance and ended up engaging their subjects with impassioned seriousness. (At least, that’s his argument about “Far From Heaven,” which he initially found tongue-in-cheek and not earnest enough.) In passing, he mentions Beck’s “Sea Change” and Wilco’s “Yankee Hotel Foxtrot” as other examples of the new seriousness.

It may be, and I have no quarrel with saying goodbye to too much ironic cleverness. But there’s a new example of “straight,” non-ironic presentation in the media that I don’t think I can tolerate. Stephen Malkmus has done a cheesecake shot to promote his new cd, “Pig Lib.” The Village Voice has a photograph of him lying on a bed, his arms thrown over his head, his face turned langorously toward the camera. It looks like any old handsome, empty Calvin Klein model till you tip the paper sideways and there’s his face! His intelligent, chiseled face that used to wear its beauty so casually! He used to not even seem to realize he was exquisite! Suddenly he’s using it and exploiting it and even seeming to enjoy it! 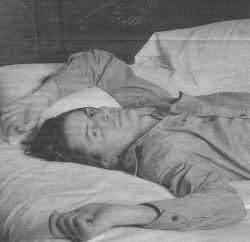 It’s hard to think of an analogy, because indie rock is a relatively recent phenomenon, but, well, suppose Jeff Mangum of Neutral Milk Hotel was featured posing in the lame fashion section of SPIN. It used to be indie rockers could be counted on to reject mainstream approaches to everything from marketing to videos. They subverted, they maintained ironic distance. So okay, maybe irony is dead. Maybe Malkmus isn’t an indie rocker anymore—everyone grows and changes. Or, maybe he’s doing an ironic cheesecake shot, a parody of a sexy art photo like those done by Peter Hujar, say. But leave it to him to be able to do one that’s both gasp-worthy and ironic at the same time. As SPIN’s editor Sia Michel observed years ago, Pavement have always been the boys with the most cake. It figures that in his solo career, Malkmus not only isn’t fading into irrelevance but is somehow jauntily in tune with the brand new zeitgeist, too.

You can download a couple songs off Pig Lib, “Us” and “Oyster” (as well as “Hook” from his solo debut), from Matador. Johnny Loftus wrote about this dreamboat back in April, 2001. And Kristy Eldredge covered a Jicks show last December.

3 thoughts on “He’s Got Style, Miles and Miles”