Guys. You’ve really got to consider a few things before taking on gigs. Like playing in the parking lot of the Fisher Theater in the New Center district of Detroit last night. Sure, it was good to see you. Up on the stage sponsored by the MGM Grand Casino, one of three casinos in the nearby vicinity. (Oddly enough, Jeff, you didn’t make that connection during “Casino Queen.” Sure, you can crack the Tigers for being a shitty baseball team—as when you asked the crowd how many know the lyrics to “Jesus, etc.” and then noted that there were about 20%, which you described as the hitting average of our hometown team—which, of course, gives your act some immediacy and context for the sweaty crowd. But the casino connection was just so obvious. Maybe that’s the reason why you didn’t.) There were 35 restaurants that had their wares on the blocked-off West Grand Boulevard. Everything from the expected ribs to turkey quesadillas, which accounted for the smoke and occasional fragrance in the air. Just a few blocks away, down West Grand, there’s the Motown Museum. Small world. You were in some hallowed terrain. 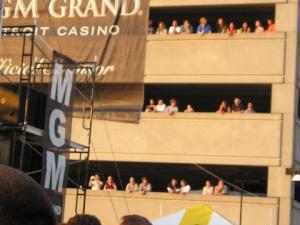 Anyway, about the parking lot. A friend of mine once saw the Bob Seger System in the parking lot of the Oakland Mall. That’s the System. The band that did “2 + 2 = ?” and “Heavy Music.” Not the lame-ass group that became famous. You can’t hear the good stuff on the radio, as you know. (Just the crap on the Chevy truck commercials.) The sound was awful, he tells me. Which was absolutely right for them. Hell, Pep Perrine used gold-painted trash cans for tom-toms back then. But it’s different for you guys. Jeff, your vocals—and you knew it, asking about the mike early on in the show—initially sounded as though you were singing in a Maytag side-by-side refrigerator box through one of those megaphones that singers used in the ’30s. The instruments were moderately better, with the audio fidelity of a garage band—and I mean a band that plays in an actually garage that includes tools, lawn mower, shovels, and miscellaneous detritus. When you did the willful distortions that are common on YHF, didn’t have the audio charm of the recorded disc, because everything sounded fuzzed out and sonic looped when you weren’t trying. “Poor Places” didn’t need to be played in such a poor place. I must admit that an hour into the show, the sound seemed better. I’m not sure whether the guys working the soundboard actually got things right or maybe I just became used to it. 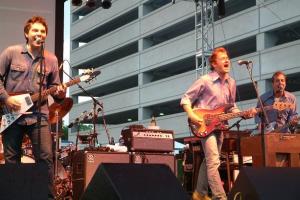 You should probably know that the several hundred people there were not down there for the fried corn or the fish and chips (as a life-long denizen of Detroit, I’ve got to confess that I never realized there were quite so many fish and chips shops: You’d have thought it was London had the skies not been clear and the temperature hovering around 90 [given the Kahn architecture of things in the immediate area, like the classic former GM Building, which was catty-corner from the stage, that claim of London is not as outrageous as it might otherwise seem. Not all that may blocks away Kosovo might have come to mind.]) but to hear you guys. Even if crowd didn’t do a good “ooooooo heeeeeyyy” on “Heavy Metal Drummer,” as you’d asked. Maybe their lungs are bad from too many clove cigarettes or Du Mauriers (there were Canadians represented in the crowd, including one guy not far from me who seemed to be in some sort of Joe Cocker fugue during the show, jerking his arms and fingers in a spastic tremor and playing air-bass, not guitar, something that seems a bit uncommon). The mayor of the city, Kwame Kilpatrick, who is sometimes described as the “hip-hop” mayor due to his youthfulness, ought to get you guys back more often to persuade so many suburbanites to go downtown.

The question that arises is: “Is bad-sounding Wilco better than no Wilco?” Yes, I know how many people will answer that question. But it brings to mind another question that I overheard last night. There was a group of well-dressed black women ranging in age from, perhaps, 35 to 60, who were carrying their paper plates of food and plastic beverage cups. It was about 20 minutes before the 8 pm starting time. The folding chairs were all-but filled, yet they, like many others, walked toward the stage, as though they (and the others) expected that there would be six or seven empty seats front and center that were just sort of waiting to be filled by people who hadn’t shown up a couple hours early. And one of the women asked, “Are all these people here because the band is good, or is it because it’s free?” The answer to that could be “Yes” on both counts.

Thanks to Scott Putman for the Wilco photos and to Jason Welch for the shot of the parking structure! And, as always, thanks to Via Chicago for bringing all the Wilco fans together in one spot!

20 thoughts on “Memo to Wilco”