Nelly’s “Hot In Herre” was the jam in 2002. But where was the payoff? Even with its delightfully crass XXX shout-out, the track ultimately failed: No one actually followed Nelly’s advice and disrobed. 2002 was another year in which the gates of the standards of decency were tested and strained by battering rams like Nelly and his heathens, only to successfully absorb the blows. “NYPD Blue” continued to present their curious, one-buttock form of nudity. MTV’s “Real Word” cast embraced Vegas (and each other) to the fullest, but their cameras still crept coyly away before any money shots could be fired across the network’s starboard bow. Even Playboy Magazine, bastion of the bawdy, grudgingly admitted that gentlemanly taste has moved from the boardroom to the locker room. Hef picked up the towel that Marilyn Monroe dropped in 1953 and threw it into the Lad’s Magazine restroom, where it landed on a mildewy stack of Maxim, FHM, and Stuffs across from the toilet bowl. And on the cover of each rag was Christina Aguilera doing her best PG-13. Because that’s what 2002 really was — PG-13 wrapped up in NC-17’s bedsheets.

But what will John Ashcroft do with Julie Volkova and Lena Katina? Having spent 2002 spreading the love throughout their native Russia and Europe, the women of t.A.T.u. will now try to straddle America in 2003.

It’s not about their music, a boring amalgam of Eurohouse and guitar posturing that approximates a warped Blondie LP with KY Jelly spilled all over it. No, t.A.T.u. is tits n’ ass, straight up. The difference is in the presentation. Volkova and Katina have hearts aflutter over their apparent lesbian relationship, the trials of which are detailed in their debut single, “All The Things She Said.” The accompanying video clip updates Britney Spears’ “Hit Me Baby (One More Time),” complete with schoolgirl outfits for t.A.T.u.’s principles. Remember, this is 2003, not 1998. “All The Things” depicts the duo as pariahs, separated from “society” by an iron fence. As the rain pours down on their, ahem, lacy white tops, Volkova and Katina make out in full view of the umbrella’d paragons who launch awkward eyes from beyond the fence. “Feeling cornered and rushed,” they sing. “They say it’s my fault but I want her so much.” The video ends with the t.A.T.u. two hand in hand, walking into the sunset. PG-13, it isn’t. 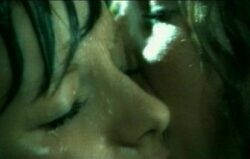 Or is it? Despite all the spit-swapping, the alleged Sapphic relationship at the heart of t.A.T.u. is probably just lip service. “Everybody thinks we are lesbians,” Katina tells MTV News. “But we just love each other.” Which is likely double-speak straight from the mouth of Ivan Shapovalov, the girls’ manager and Russia’s answer to Andrew Loog Oldham, Kim Fowley, Lou Pearlman, and Max Martin. Shapovalov — the advertising exec and ex-psychologist — has followed the formulas of the former svengalis above to the letter. The addition of lesbian trickery to the Fantasy Island that is t.A.T.u. may or may not be Shapovalov’s doing, but it certainly creates the kind of controversy required to sell shitty Russian pop to heavy walleted American teenagers.

t.A.T.u. is only one example of the berserkers that will storm the walls of the Conservative Castle in 2003. It wasn’t surprising that New York’s Electroclash movement didn’t take the turnpike to the heart of America. But the inherent bootyliciousness in the genre’s crass warfare has not gone unnoticed. Fischerspooner found its way onto Capitol Records (#1 will be released February 25), and Peaches — she of the classic bombtrack “Fuck The Pain Away” — recently toured with Queens of the Stone Age. Staying in NYC, the Big Apple’s Princess Superstar released the single “Fuck Me On The Dancefloor” late last year — and currently appears in a national print spread for Levi’s Type 1 Jeans. The vanishing point uniting blatant sexuality with mainstream culture always seems to be on the horizon; 2003 might be the year it breaks through. Because sex — not simply sexyness — is selling better than ever. (Just ask Ivan Shapolvalov through a haze of expensive cigar smoke.) How long before “NYPD Blue” kicks the door all the way in and admits that the human ass contains two cheeks?