The Libertines with the Living Things

In their native England, the Libertines are top. With the NME already mad for the young lads’ herky-jerky jumble of Clashing Buzzcockian modternative, things got even better when co-frontman Pete Doherty was kicked out on his arse by supposed pal and fellow singer Carl Barat. Drama! Issues! Rock and roll and skinny pants – it was the kind of soap opera that everyone loves, but that the British journos slop up with hunks of stale bread.

The band did make it to America briefly last spring, causing trouble at Coachella and selling out some shows in the Strokes’ backyard. But then Doherty was dropped and the ‘Tine trajectory flailed. Up the Bracket was receiving its critical due domestically, if not a popular one, so the chance that we Americans would ever be able to check the band’s meaning once more before the foot shooting ceremony was nil. But ho ho, not so fast. This month finds the boys in the band car jamming the states yet again, which found Glorious Noise hanging at the Empty Bottle to see about the noise annoys.

It wasn’t quite a sellout. Jake Brown and I had hooked up the presale, but upon arrival our pals Harpo and the Swede were able to do the walkup. Safe inside the club walls, the jovial crew made its way through the Bottle’s roughshod hep billiards room, and into the bathroom bottleneck. Arriving in the club proper, it was immediately clear that half the room was sweating Old Style while the other half blew blue clouds of American Spirit into the sticky air. Inhaling was like chewing on an alpine ski sweater. No matter; soon there was an opening act to worry about.

St. Louis’ Living Things are a brotherly trio of longhairs with a DreamWorks contract and an Albini-helmed EP jammed in the waistband of their black jeans. Tall, with riotous amounts of inky black hair streaking across jagged, pale faces, the Berlin brothers seemed like teetering funhouse mirror men in the krausened air of the Empty Bottle. Each song of their efficient half-hour set was a major league power riff placed over economic, yet pummeling percussion. Vocals? A mixture of cocksure and dour. Soloing? Out of key, and out of place in my book, although Harpo took issue with that. Speaking of reactions, Jake Brown suggested that the Living Things were a living history display of what Kiss might have been like as a pre-makeup bar band – all hard-driving chords and gutter bass lines, but not very interesting. Besides, it was hot as hell, and lead Thing Lillian Berlin’s slurred political consciousness raising was only making the scary Phantom of the Park effect stronger. Jake Brown shook his head as the Swede took a swig. “Play trash, you hippie!”

With the Living Things over, we had only the heat, soundcheck, and the clatter of 200 hipsters to keep us company. The Libertines were taking their own damn time to find the stage, but when they finally climbed aboard, it was all sharp angles and water pills. See, behind his guitar Barat was zipped to the lip inside a skinny leather jacket. This, of course, was ridiculous. But, you have to realize that, like their well-appointed compatriots of this current rock revival, the Libertines are as much about an articulated, properly-mussed look as they are about perfectly-influenced two minute blasts of vintage rock jibber jabber shot through with 21st century reengineering. Given all of this, the band could’ve played that sweatlodge of a club wearing full-length fur coats if it so suited their look. 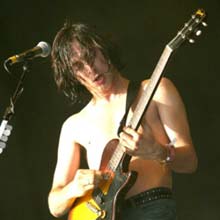 Barat, unmoving bassist John Hassell, drummer Gary Powell, and stand-in guitarist Anthony Rossomando broke forth with said jibber jabber, tearing through seemingly half their album in the first three impossibly catchy songs. And then something funny happened. Barat peeled off the leather, transforming himself into a glistening mop of Mazola. It was the first time in a long time we’d seen the no shirt move, and it was even more surprising considering the skinny, pale, and affected cliché that follows bands with haircuts such as theirs. Whipping his guitar around to face Powell, ripping in and out of songs and adding a gritty churn onto Rossomando’s already dirty power chording, Barat was a one-man army of focused rock energy. He also must’ve heard that old story about Jackie Wilson. Wilson would ingest water pills before a show to increase the sweat factor. Because the crowds – the girls – love a performer who sweats balls. Beads of Mazola were dripping all over, and the Chicago crowd was loving it.

Barat’s enthusiasm seemed a bit inward-turned, as if the Libertines were there more for their own benefit than ours. The band said little – in fact, there may have been only one bit of a “thanks” toward the end of the over-before-it-began set. But despite the standoffishness, the band stood on the Bottle’s triangular stage and stole the heat from the air, gathering it up at the end of each song to fan the flames of the next. Each number would clunk and slash to a rumpled final note. Barat and Rossomando would stagger about, snatches of feedback or a half-played riff rattling around in the monitors. But then Barat would whisper something to Hassell, who’d immediately lay into a rapid fire bassline with the support of Powell, and the guitarists would start cutting back and forth with burning London revolution rock, and another song would be off. It was an in-the-sweaty-flesh version of Up the Bracket‘s effortless energy and spazzy riffing. While the presence of Doherty probably, certainly would have made the air crackle that much more, he was too busy kicking in the door of Barat’s flat back home.

Standing outside the club, sucking on the fumes of the Libertines’ vintage bus and watching their coterie of roadies roll road cases onto Western Avenue. Jake’s stomach ached from a hellacious cocktail of Old Style and White Castle, while Harpo was griping about his brand-new parking ticket. The Swede, ever the silent observer, finally broke his silence. “That was some great, Clash-style shit,” he said, wiping his brow. “It was like sweatin’ to the oldies.”

17 thoughts on “The Libertines: Wet Work”