Thank you, everyone who made it out, for making Glorious Noise’s third anniversary party a complete success. Thanks to everyone who attended, we will be able to donate over $1,000 to the Elliott Smith Memorial Fund. None of this would have been possible without the selflessness of the three great bands who put on one hell of a show: The Millions, Riviera, and Quasar Wut-Wut. Each of the bands sounded great and poured their own spirits into the rock and roll punch bowl. What a fucking night!

Rock and roll poet laureate, Thax Douglas, kicked off the evening with a brand new poem that he gave us permission to reprint here:

to keep
the gelatinous mess
of mind from
hardening into its
disease, Glorious
Noise is a set
of free flashing
Ginsu knives slicing
the mind up so
the orphaned
organs of thought
have to develop
a flailing program
to find each
other again – but
that’s OK
since the brain
itself doesn’t
feel any pain. 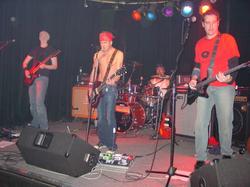 With that the Millions kicked off the rock with a blistering set of their million-dollar rock. These guys don’t fuck around. They rock hard. At the same time their sense of melody and songwriting won over a lot of people who don’t ordinarily listen to that kind of music. Plus, they wrapped up their set by covering “Welcome to the Jungle,” and everybody loves Guns ‘N Roses! While the Millions were breaking down and Riviera was setting up, Johnny Loftus read his piece about the Darkness, Crotch Rock It, while everybody hooted and howled at him. Riviera played a great set with a lot of new material. The packed crowd went nuts for them. Could Riviera be Chicago’s next big thing? Someone at the Tribune must think so, because they sent a photographer to snap some pics. We cut the cake, and astonishingly there were no food fights. People’s mouths must’ve been full because not a single person yelled for “Freebird.” I’m still amazed by that. 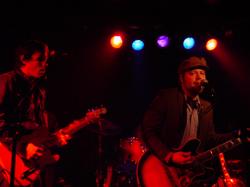 Before Quasar Wut-Wut started playing, I went up and rambled drunkenly for a little while before making a very important announcement. Glorious Noise is starting a record label, and our first release is going to be Quasar Wut-Wut’s long-awaited new album. We’ve still got some work to do to make it all legal and everything, but we’re planning on a springtime release. Stay tuned for more information. This is going to be exciting. And nerve-wracking, I’m sure. But I’ve heard the album, and it’s a fucking amazing piece of work, so we are proud to be associated with it. More on this later. 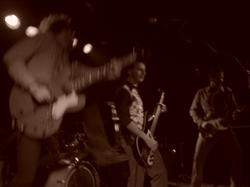 Quasar Wut-Wut played their asses off in a surreal set that raised the dead—hell, even Tattoo You-era Mick Jagger found his way onto the stage for a little while. To tell you the truth, the Quasars rocked so hard that they actually blew out a small portion of my memory. But the pictures look like I was thoroughly enjoying myself, ha ha. Oy. The next thing I remember, the staff of the Beat Kitchen was kicking everyone out and I had to beat up the bartender to get the money for Elliott Smith’s poor, abused children. Or something like that…

But really, by all measurements, the party was a huge success. Lots of people came, everybody seemed to be having a great time, the bands sounded awesome, the cake was delicious, the waitresses were pretty and attentive, someone ended up with a free Seal cd (sucker), and lots of people got silly buttons and stickers from major labels with huge publicity budgets. Hopefully, next year we can have a party that’s as much fun as this one was. And maybe by then we can talk the labels into giving us better crap to give away!

Thanks again, everybody, for making it happen. And, also, not to be too self-congratulating here, but I’d also like to thank all the GLONO writers, past and present, without whom there would be nothing to celebrate. Now get back to work!

Here are a bunch more pictures from the show. Most of the good ones were taken by Megan Phillips, and the rest were taken by some drunk retard who could barely stand up straight much less point the camera in the right direction. Also, we recorded the entire show, and it sounds great, so we’ll be trying to figure out a way to stream it online. Hopefully we’ll get that up soon…

22 thoughts on “Thank You for a Great Birthday”