It’s the Coachella Curse, and it strikes every year. But we should all be lucky enough to have it.

Last year, halfway to the forsaken strand of cacti called Indio, California (where the arts and music festival is held), two of my travelmates realized they had left their tickets at home. Two panicked hours later, we were also lost in West Hollywood, eventually adding about five hours to our drive time. This year, my Amtrak to the pre-concert press party ran maddeningly late, a train experiment with hot soup resulted in second-degree burns, and I had a wild incident at the aforementioned gathering (at the Viper Room in Los Angeles) that resulted in bruises to my nose, lips, and legs. And no, I’m not committing it to print, because I wasn’t even legally supposed to be there.

But details, details. The sixth annual Coachella celebration was the hottest thing to hit the Southern California desert in ages. Held April 30 and May 1, it delivered musicians of big names and big promise, art with a purpose, some serious partying, and a few realized dreams thrown in for fun.

Saturday started with a bang and a whimper. New York dolls The Sexy Magazines rocked hard with provocative, Iggy-style punk, tight pants, and an electrified showmanship that belied their young age. (Forget the Hives – these college kids really are barely legal.)

“We came here last year as guests and decided that this was our goal – we wanted to play at Coachella,” said drummer Brion Isaacs afterwards. “So we worked and practiced all year, and we actually did it.”

Saturday, for all its sunny heat, also saw its share of cool. The Raveonettes drew an impressive midday crowd with their main-stage set, stopping their mellow surf harmonies to check on the audience. “Are you guys okay out there? Really?” asked singer/guitarist Sharin Foo, fanning her retro blue sundress. “I’m glad we’re in the shade.” M-83 also played their share of head-bobbing melodic pop, and Ambulance LTD matched their sparse lighting with jangly guitars, minimal banter, and wandering instrumental interludes.

But peaceniks needed not apply – rapper Immortal Technique incited the crowd with amazing and expletive-heavy freestyles on politics, the state of hip-hop, and the revolution he demanded start immediately. One tent over, the Kills matched his fire with frantic blues-laced rock; the sweaty duo eventually collided at center stage to grind, hump, and fall just short of devouring each other.

Keane softened the blow at center stage, drawing what seemed to be every single concert patron over 30. (That is, except for one determined teenager, who smoked pot nonstop out of a hollow ChapStick tube.) The crowd then multiplied to Chinese proportions for Wilco, who played several of their longer songs (including a blistering “I Am Trying to Break Your Heart” and wistfully subdued “Jesus, Etc.”). Frontman Jeff Tweedy apologized for the band’s last-minute cancellation at last year’s Coachella, addressing his rehab stint candidly with, “I was too fucked up last year, but now I’m much better and very happy to be here. I don’t even like festivals, but this one’s cool.”

As the sun went down, Weezer received a hero’s welcome with the most enthusiastic crowd response of the day – and then lost it. In between mumbled comments about the “beautiful night” and prolonged blinking, Rivers Cuomo and Co. played the hits from the Blue and Green albums and a few new verse-chorus-verse songs that left the crowd considerably less vocal. (Full rant on that almost definitely forthcoming.) At the end of the set, the perennially man-boy Cuomo stuck his guitar up to the amp and unleashed a current of feedback, the frozen stare behind his black glasses both fascinating and maniacal. But even scarier was Sage Francis; after the Weez, the slam poet-turned-rapper held an explosive hour of smart, heavy rhyming, at one point stripping down to his boxers and becoming no less intimidating. 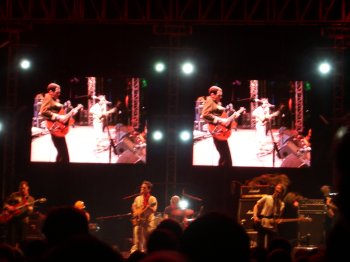 The night’s headliners, Coldplay, performed after that, though I preferred to feel cool by association at the URB and Spin Magazines’ after-parties. There, my friend Kimi and I gawked at celebrities and musicians (even harassing a few for photos, as I did with Yeah Yeah Yeahs guitarist Nick Zinner), danced to Team Sleep and a DJ set by Interpol’s Carlos D (at URB), and snatched all the free clothing that was distributed or stupidly left on tables in front of us. (And once again, legal logistics prevent me from telling the full story, but I will say that various members of N*Sync were in attendance.) For ‘industry’ parties, they were quite entertaining, though it’d be hard to be annoyed at a crowd dancing to Roy Orbison (at Spin). And then, at 3 a.m., Day One of Coachella came to a close.

Coachella has always drawn a hazy comparison to Woodstock, but Donavon Frankenreiter made the strongest case. Decked in hippie duds and playing squealing Santana-esque solos, he reminded us that the summer of love may not be completely dead. Maybe now we just get a weekend.

Jem, dressed for the tropics in a bikini top and skirt, ran through her lilting pop songs with cheer and wry humor. To introduce her cover of “Maybe I’m Amazed,” she giggled, “I don’t know if this is PC to say here, but I did this song when I was the wedding singer on ‘The O.C.‘ Come on, it’s a guilty pleasure!” As are a few other things for the Welsh songstress – after her set, she explained, “I’m looking forward to getting drunk. I’m very excited.”

Buzz band the Bravery played tribute to their 80s heroes (including fellow performers New Order) with a guitar-heavy set and a tent packed with jittery young dancers. They were flanked by laid-back reggae rapper Beans and electronica presence Miss Kitten; when the eclectic crowds dispersed, some headed for twin folk darlings Tegan and Sara but it seemed most headed for the art displays. This year, the exhibits included light spectacles, electro-static machines, and TRASHed, a collection of garbage cans painted by 100 artists (including a mostly untouched, cryptically scrawled entry by the late and amazing Hunter S. Thompson).

Rock ruled the late afternoon. Punk pioneers Gang of Four, still every bit the snarling young troublemakers, previewed new material and pleased their largely adult fans with older tunes. Some of their thunder was stolen by the ragtag troupe the Arcade Fire, a group of vaguely dapper young rockers who seemed to have their amps on 11 and the enthusiasm likewise. 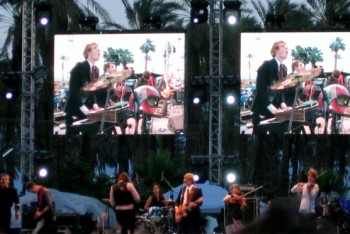 Similarly, self-described “Brechtian punk cabaret” duo the Dresden Dolls delivered the theatrics, though theirs were more calculated. Their act combined gothic makeup, sneering and leaping, and fierce renditions of their genre-bending jazz-rock songs. Ghostly pale drummer Brian Viglione took special glee in smashing the cymbals and mouthing the lyrics – in his bowler hat and dark suit, he looked something like an exhumed Charlie Chaplin.

New Order looked a bit weary, but hey, they’ve been through a lot. They still turned out a crowd-pleasing act that revolved mostly around new songs and old hits, most prominently “Blue Monday” and Joy Division’s “Love with Tear Us Apart.” It was a bit jolting to hear a much higher voice that Ian Curtis’s roll over the prophetic words.

A unexpected hit, despite the initially thin turnout, was the unusual beat team Matmos, who combined a sequence of blown bubbles (performed live) into a party-ready electroclash song. Neighboring act Pinback opted for more traditional jamming, sticking to mostly midtempo arrangements and a few surprise flourishes.

But the real stunner was Nine Inch Nails – or rather, that their anger turned into real fun. Main man and impressively old-school rock star Trent Reznor seemed more Soundgarden than Sabbath, dripping with perspiration and roaring in pitch-perfect anguish through both new and known material. Standouts included his minimal, dimly lit whispering for “Hurt” and the jolting nympho anthem “Closer,” which took on an eerie spirituality as over 10,000 sandy fanatics sang together about how they want to, well, fuck you like an animal. And I was one of them.

Still looking to unleash their feral rage, a good portion of the main-stage audience split for the Prodigy, who brought a little slice of absurd continental intensity to the opposite end of the fairgrounds. The wussies (ahem) hugged together for Bright Eyes, which caught Conor Oberst in full hypersensitive glory. And for all the current whining about emo, it was a moving show. This left the hip-hop buffs at the long-awaited reunion of Black Star (comprised of Talib Kweli and Mos Def), who rapped a punishing, sometimes indecipherable streak. 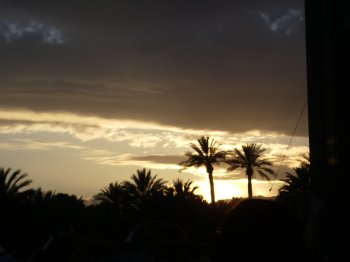 And this left me panting on the grass, both relieved and disappointed that I wouldn’t have to sprint across the field to catch another group’s show. Coachella was over – and a long year of anticipation was about to begin. (I passed the first five hours of it draped over dirty luggage, snoring.)

But let me tell you, it’s worth the wait.

Photos by Stacey K. Anderson and Kimi Kieft. Be sure to go back and read Glorious Noise’s coverage of Coachella 2004 too.