Colin Meloy is a clever bird. In front of what may have been the most respectful crowd ever assembled for an acoustic show, the Decemberists lead singer delivered an entertaining set that was equal parts humor and humility.

The Decemberists are one of the it bands of the moment. Their fans display a devotion and commitment akin to that of Smiths fans of yore. And Morrissey was on the top of every mind at this show.

Hawking a tour-only EP of Morrissey covers, Meloy even took on the appearance and sound of The Kids in the Hall alum Bruce McCulloch channeling the Moz Father himself. The result led one young fan to buy seven copies of the EP—SEVEN!

Half joking that we should all keep this EP on the downlow because he “didn’t exactly go through all the right channels,” Meloy gave a brief dissertation on and then fantastic cover of “Sister I’m a Poet,” and thus fulfilled the adolescent dream “stored in the teenage collective” of doing an album of Morrissey songs. And why not? It’s a smart move artistically and commercially. Given the recent media blitz Morrissey enjoyed this summer and the passing of time, Moz is once again en vogue. And Meloy understands Morrissey and the core of his genius, which is that being maudlin doesn’t necessarily mean morbid or morose. There’s a great deal of humor in tragedy and the bookish crowd (literally—one guy in front of me was reading a book in between sets) expected just that from their hero. 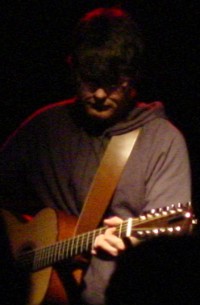 Meloy’s set was a compilation of rare and popular tracks—including three songs from the upcoming album—banged out on an out of tune 12-string and sung with an eye to his influences. With hilarious stories of stolen bicycles and wayward seamen and showers of thanks for the adoring crowd, it was a perfect close to a night that started with GLONO’s own Quasar Wut Wut (mp3s) and the plucky Shelley Short both delivering complimentary acoustic sets. It was the kind of bill that has made Schubas the premier venue of its size in the city (if not all of the Midwest).

Meloy has a long future ahead as a solo act should the Decemberists’ hype ever thaw. Eef Barzalay and Jeff Tweedy should watch their backs.