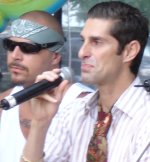 Before things kicked off on Saturday, Perry Farrell was asked what he thought of accusations that the festival had become too mainstream. “The world has changed,” he said. “I’m not afraid of the mainstream. Maybe it’s time to get the mainstream involved in our cause.” Sure, there were plenty of Top 40 bands on the schedule (Weezer, Dashboard Confessional, The Killers), but when’s the last time you heard the International Noise Conspiracy on the radio? Or Ben Kweller? Or the Drive-By Truckers? Or shit, even Dinosaur Jr?

With two bands playing at a time on the main stages, this year’s festival was all about choices, and the choices were usually pretty obvious: interesting, somewhat obscure band vs. mediocre somewhat mainstream band. So here are a few observations of the bands I happened to catch. I didn’t try to get extremely methodical or professional about it. I tried to have a good time, hear some good music, and stay cool. I more or less succeeded on all counts.

• 12:00 – The Redwalls (Capitol) – Jesus Christ, those kids are young. Bassist Justin Baren looks like the guy from That 70s Show during the first season (when he was young). Great harmonies, catchy hooks, classic Chicago power pop. Even though I wanted to hate them because of all the local hype they’ve been getting, what’s not to like?

• 12:15 – The International Noise Conspiracy (Burning Heart) – Their use of parentheses is annoying, but they’re music isn’t. They’re a great garage rock band that deserves to be as big as the Hives. (Are the Hives big actually? Whatever.) It’s funny to see them ranting against capitalism while standing on the SBC East stage. Maybe the commie thing is just a clever gimmick. Regardless, their matching red shirts looked awesome. And they sounded great. Noisy and raw and loud.

• 12:30 – The Warlocks (Mute) – This was the highlight of Saturday for me. They’re fucking awesome. Although they’re not necessarily a band you want to see in the daylight. Dark bars can hide some of the wear and tear that a hard lifestyle exacerbates. But who cares about that when a band makes this kind of racket? In the grand tradition of Velvet Underground worshippers everywhere, the Warlocks find that perfect blend of drone and groove, of noise and melody, and they ride it out until it’s done. You’ve got to love a band whose two poppiest songs are called “The Dope Feels Good” and “Shake the Dope Out.” Hey hey hey! The fact that they now have a completely innocent looking, apparently 17-year-old blonde on synths and tambourine (in addition to their two drummers, three guitar players, and female bassist) makes the Warlocks even more perverse; it’s like she moved from Kansas to California and fell in with the Manson family. Fashion note: Bobby Hecksher was wearing Seven jeans.

• 1:30 – Ambulance (TVT) – I thought I only liked two of their songs (“Primitive” and “Anecdote”), but they kept busting out good stuff so maybe it’s time to go back and listen to their album again. Live, they sounded a lot less britpoppy than I remember. The singer is too good looking to be taken seriously though. 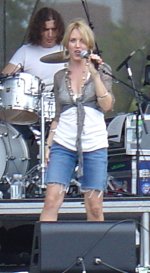 • 2:30 – Liz Phair (Capitol) – Oh Liz. Why do you do this to me? Why do you have to break my heart? And then stomp on it? And box it up and bury it in the ground? You put in my hand a loaded gun and then told me not to fire it. Well, sorry. You can’t sing those Matrix songs, baby. You just can’t. I love your voice when you’re singing your own songs. It’s unique. It sounds cool. It’s you. But when you go for those Avril high notes and your voice goes all warbly, it makes me sad and embarrassed for you. Like seeing an ex at a bar and they’re stumbling drunk and making an ass of themselves. That’s what it’s like when you sing “Extraordinary.” Please stop. A new song from her upcoming album was not very promising with lines like “Every frog has a prince inside” and something about “a fairytale waiting for me.” Time to start smoking weed again. Realize when you’ve written a shitty cliche of a pop song. And while the Glorious Noise fashion department insists that those cut-off jeans are happening this season, I can’t help thinking they look like what my mom wears while she’s gardening. Not hot. 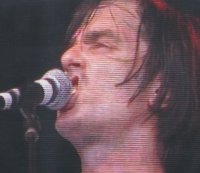 • 3:30 – Brian Jonestown Massacre (Tee Pee) – This is when I realized the huge logistical flaw of Lollapalooza 2005. When a loud-ass band is playing on one of the big “SBC” stages, you could totally hear them at the other stages. See, there were four stages in main field, two big stages sponsored by SBC and two somewhat smaller ones sponsored by other companies. There were always two bands playing at the same time, one on an SBC stage and one on a smaller stage. But they needed to be farther apart, or pointed in different directions, or something that I’m sure any acoustical engineering student could figure out. But it was fucking annoying, and I wasn’t the only one pissed off by Dashboard Confessional’s music being as loud as Brian Jonestown Massacre’s music while standing by BJM’s stage. My man Anton Newcombe agreed with me. He continuously berated the other band. Waiting for them to finish songs and then hurling insults at them. It was funny. It wasn’t overly antagonistic or antisocial. But it obviously bothered him as much or more than it bothered us. While a more “professional” band would just turn up their amps and barrel on though, Newcombe took it as an sign of disrespect and thoughtlessness. So he lashed out at the perpetrators: some dumb emo band across the park. “Should we play one more song?” he asked after a ten-minute pause that followed a 20-minute psychedelic drone jam during which his brother Matt Hollywood set down his guitar and hugged each band member as if saying goodnight. “We’ll play one more… As soon as Jon Bon Jovi shuts the fuck up!”

• 4:30-7:30 – Cake / Blonde Redhead / Billy Idol / Primus – This is the point in afternoon when I sat on a blanket and started drinking heavily. A pal smuggled in a bucket of chicken, some beef jerky, and a bag of peanuts (as well as a flask of whiskey), so this was the “picnic” part of the festival. The weather had been perfect all day. Warm, but overcast, so it never felt too hot. After heat advisory warnings all week, the weather on Saturday was a pleasant surprise. Even the rain during Billy Idol was welcome; it didn’t last long enough to soak us through, but it cooled us off enough to recharge our batteries. Music was happening around us but it was pretty innocuous. I heard some Blonde Redhead while I was standing in line for corn (only $2!) and nachos ($4, not horrible) and they sounded kind of annoying. Maybe you actually have to listen to them.

• 7:30 – Pixies – (4AD) This was the third time I’ve seen the Pixies. Once was back in the day, and the other time was on this reunion tour. It might’ve been more mindblowing had I never seen them before, but as it was it was just a lot of fun. Like hearing all your favorite songs on a jukebox in a bar. The Pixies are a great fucking band with a catalog that contains some of the best songs ever recorded. I’m a little sad to see they’re still not playing many Bossanova songs in their set, but whatever. Every song they played was great, and we all screamed along to every line and jumped up and down and acted out the lyrics and scared all the pierced teenagers around us. Ah, what a band. Those four nerdy old people who look exactly like everybody’s neighbors filled the whole park with their beautiful, noisy rock and roll. 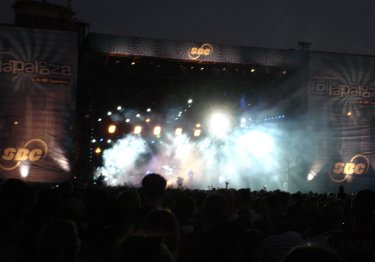 • 8:45 – Weezer (Geffen) – Oh Rivers. Why do you do this to me? Why do you have to break my heart? And then stomp on it? Why you wanna go and do me like that? Actually, this show was pretty fun. For a while. Then they played some terrible new songs. And we left. And went home and went to sleep. Only to wake up the next morning to do it all over again. Hungover. In 102 degree, cloudless weather.