“In religion and politics people’s beliefs and convictions are in almost every case gotten at second-hand, and without examination, from authorities who have not themselves examined the questions at issue but have taken them at second-hand from other non-examiners, whose opinions about them were not worth a brass farthing.”

Stephen Colbert has taken a quick comment from America’s father of satire and built an entire career out of it—all at the expense of blowhards and cheap political dolts who bloviate for a party they don’t even support anymore but who pay their bills on time so why not keep shilling?

We’ll admit we don’t put a ton of time or thought into our selection for the Upright Standing Man of the Year Award. The honoree just seems to bubble to the surface and upon review simply seems obvious. Year one was a no-brainer. Johnny Depp is, and has always been, cool. When he footed the bill for Hunter S. Thompson’s explosive curtain call, well…we were sold.

For year two, we had a similar defining moment for our honoree. Stephen Colbert’s fearless lambasting of George W. Bush at the White House Correspondents’ Association dinner speech was more than a career-defining instance, it was a touchstone for American political satire. It was a Mark Twain moment. 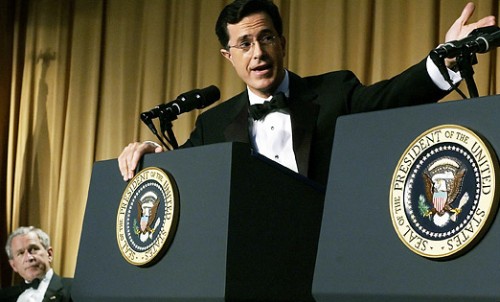 Stephen Colbert is more than a comedian or a character on a second-rate cable channel. He, along with boss John Stewart, is doing the grunt work that used to fall to the media. He’s taking our political leaders to task and exposing their hypocrisy and shortcomings. If he can do it all while exposing the lunacy of right-wing talking heads, he deserves a medal…or at least a made-up award from a music website.

Editor’s note: This article got lost in the haze of the holidays and went unpublished until late in 2007. We apologize for our tardiness.