Morrissey at the Aragon Ballroom

I could’ve seen the Smiths on their Queen Is Dead tour in this same venue, the Aragon Ballroom, in 1986. They also played the Aragon on the first stop of the Meat Is Murder in 1985, but I hadn’t heard of them at that time.

A guy in my French class had made me a cassette with Meat Is Murder on one side and The Queen Is Dead on the other. I can’t remember why he gave it to me, but maybe it had something to do with the fact that I dressed fruity and liked Wham and a-ha. Everybody copied tapes for their friends back then. He and some of his punker friends had seen the Queen Is Dead tour, and I should’ve gone with them.

A few months later, I got my hands on a taped copy of Louder Than Bombs. By this point, I had become a fan. By the time Strangeways, Here We Come was released, I owned all of the officially released albums, and I picked up the new one after school on the day it hit stores. Of course, the Smiths had broken up by then so there would be no new music. But I had fallen deep into the world of buying imported 12″ singles and trading bootleg cassettes through the mail, so there seemed to be a never-ending supply of new-to-me material to collect and study.

I would go to the library and research the cover stars of all the albums and singles. I read Shelagh Delaney’s A Taste of Honey and the complete works of Oscar Wilde. I read Beyond Belief: The Story of Ian Brady and Myra Hindley and Saturday Night and Sunday Morning. I rented James Dean movies from Video Tyme. I had British penpals who would send me tapes. I contributed to fanzines. I was a maniac. 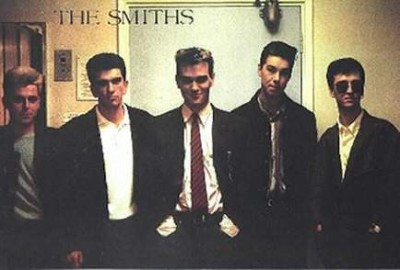 I continued to obsess about Morrissey and the Smiths until well into my first year of college when I discovered a lot of important things. Like marijuana. And NWA. And CCR. And that it wasn’t appropriate to act gay when you liked girls. Besides, I hadn’t been particularly impressed by Morrissey’s two latest singles, “Ouija Board, Ouija Board” and “November Spawned a Monster,” or their meager b-sides. “Piccadilly Palare” was the first Morrissey release I didn’t bother to buy, and I scoffed at Bona Drag as a crass cash-in aimed at the posers who didn’t collect the singles.

So Morrissey and the Smiths got eradicated along with the rest of the trappings of my affected high school persona. I stored away the Oscar Wilde books and sold off my extensive Smiths collection of singles, tour programs, press clippings, and fanzines to a pair of Latina sisters who worked at a grocery store and signed over their checks to me every week for several months until they had everything they needed. I spent the money on Denny’s and malt liquor.

And I continued to ignore Morrissey for 14 years. Throughout the 90s, I never bought a solo album or single. Sure, friends would occasionally put Moz songs on mixes or force me to listen to Your Arsenal, but I didn’t care. I had moved on, and Morrissey reminded me of an embarrassing person I used to be. So I just avoided him like you avoid that dude you used to play Dungeons and Dragons with in junior high when you see them at the bar on Thanksgiving. Or that girl who shot you down before you even got to talk to her.

I’m not sure exactly when I stopped loathing my high school self. Maybe it was ripping all of those CDs to my iPod and actually listening to the music again. Maybe it’s just getting older and the sentimentality that goes along with that. Whatever it was, I was just starting to really get into the Smiths again when out of nowhere Morrissey goes and releases a pretty good album, You Are the Quarry.

I remember listening to that album in the car on the long drive to Wilco’s first show with their new lineup. My pal had downloaded a leaked copy and even though I was indifferent, he made me listen to it. I was pleasantly surprised by what I heard. It was pretty good. The instrumentation still sounded rather inconsequential, but overall, it was a very listenable album. Morrissey’s wit and charm were in full effect.

So I got very excited when I found out Morrissey would be headlining the Lollapalooza tour in 2004 (along with the freshly reunited Pixies!). I ordered my tickets — good seats, too — and started preparing myself to see one of my childhood heroes in concert for the first time. See, I had already given up on him when he began touring the States throughout the 90s. Unfortunately Lollapalooza 2004 got scrapped, and then I missed the chance to see him when he came back for the Quarry tour.

And I almost missed him again this year. In fact, I would have if not for a good friend who IM’ed me on the day tickets went on sale and helped me track down the presale password. Thanks, LW! And then TicketSatan didn’t get my tickets to me in time. Luckily, a call to customer service produced a pair of tickets ready for me at Will Call. TicketMaster’s envelope containing my original tickets arrived the day after the show, no shit.

But we got in, and I’m glad we did because it was a fantastic show. Everything I could’ve asked for. Better, really, than I would have ever imagined. As soon as the opening band stopped screeching, we left the not very soundproof Casbah lounge and headed toward the stage. Between acts, a large screen displayed films of Moz-approved subjects such as a James Dean screen test and music videos by the likes of Brigitte Bardot, the New York Dolls, Gigliola Cinquetti, and one very obviously not American Elvis lookalike wearing a medallion and doing the Twist. 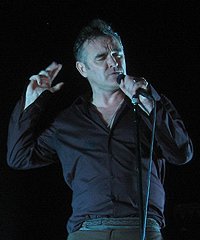 And then Morrissey took the stage. Wearing a red shirt and silver tie, he looked out to us and said, “Reports of my death have been…just slightly exaggerated.” And the band went into “Panic.” I’ve listened to dozens and dozens of hours of Smiths bootlegs so I’m familiar with the between-song witticisms he made back in his prime, and I’m asking you, Could I have dreamt of a better way to kick off my first real live Morrissey show?

Between playing the best song from Quarry, “First of the Gang to Die,” and one of the high points from Ringleader of the Tormentors, “The Youngest Was the Most Loved,” he basked in the applause and replied, “I am throwing my beefy, locker room arms around Chicago.”

Next up was another highlight from Ringleader, “You Have Killed Me,” after which he removed his tie, beginning the striptease act that he would continue throughout the evening. Shirts came untucked, buttons were undone. One by one. Shirts were changed to start the process over. He had the crowd eating out of his hands. It was great.

Before playing the 1984 single, “William, It Was Really Nothing,” he talked about his first first visit to the Aragon Ballroom, but I couldn’t tell if he said “many,” “plenty,” or “twenty years ago.” And joked that the toilet paper has gotten better, “So things are improving…”

Not every song worked out. Although his voice sounded great, some of the ballads (e.g., “Dear God, Please Help Me”) dragged to the point of yawndom. And “Life Is A Pigsty” was just too long and obnoxiously dramatic. With a title like that, you’d think the song would be tongue-in-cheek. I hate it when Morrissey forgets that he’s fucking hilarious and takes himself too seriously. John Peel said that the Smiths were one of the only bands that made him laugh out loud, and it’s easy to see why. 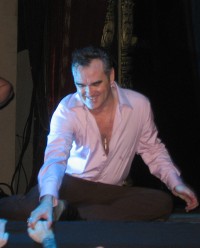 Some highlights included badass versions of “I Will See You In Far-Off Places” and “Irish Blood, English Heart” where his band sounded like they’d knife you in the alley after the show, despite their matching lavender shirts and tan slacks and vests. And when they employed the music box version of “Auld Lang Syne” that closes out the Smiths b-side “Asleep” as a new intro to “How Soon Is Now,” I almost shed a tear as 4,000 cameraphones were raised in unison. A tear of joy for the sound of that majestic riff, of course, but also in mourning for the loss of the awkward teenager I used to be. Those desperate teenage feelings that Morrissey simultaneously emulates, soothes, and gently goofs on. No band has ever been able to conjure that sense of confusing melodrama like the Smiths did, and “How Soon Is Now” is the epitome of the form. And you can dance to it!

Looking back at the set list, it’s interesting that he only played one song from my Moz-blackout period of the 90s: “National Front Disco” (from 1992’s Your Arsenal, which I’ve listened to and didn’t hate). Everything else was either from before 1991 or from his two most recent albums. So maybe I was right to ignore all that mid-period stuff. It seems as though Morrissey’s ignoring it too.

Set list: Panic / First Of The Gang To Die / The Youngest Was The Most Loved / You Have Killed Me / Disappointed / Ganglord / William, It Was Really Nothing / Everyday Is Like Sunday / Dear God, Please Help Me / Let Me Kiss You / I’ve Changed My Plea To Guilty / In The Future When All’s Well / I Will See You In Far-Off Places / Girlfriend In A Coma / Irish Blood, English Heart / Life Is A Pigsty / How Soon Is Now? / I Just Want To See The Boy Happy / The National Front Disco / Encore: Please, Please, Please Let Me Get What I Want

Previously: Why “Rubber Ring” Is the Best Song Ever.

20 thoughts on “I Have Forgiven You, Morrissey”