• 1:30 – Cursive – By the time I got checked in, grabbed a beer, and figured out where I was, Cursive was playing on the Q101 stage. I’m not that familiar with them, but I’d received a tip that I should check them out, so I found some shade on a hill and got my bearings. They made a lot of noise and had a cellist and their sound bounced around the baseball diamonds that would eventually be filled with people. Jagged, indie rock. MP3: The Great Decay. My baby mama hadn’t arrived yet. 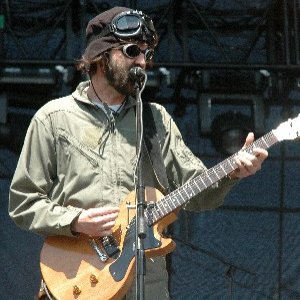 • 2:30 – eels – I expected them to be mellow. That song from Shrek and all. But no. It was a high energy rock set with tons of fuzz and distortion. A definite MC5 vibe. Who knew? Even that song from Shrek was all skanked up. Their cover of Tom Waits’ “Jesus Gonna Be Here” was a treat. MP3: Bus Stop Boxer (from With Strings: Live at Town Hall)

Fetal reaction: No kicks. Still sleeping from train ride down?

• 3:15 – The Blisters – By far, the least pretentious group on the whole schedule was this band of ambitious tweeners. Cynics might say they were only on the bill because the drummer’s dad is in Wilco, but those weenies must not have heard the annoying dreck that was going on at the Kidz Stage before and after the Blisters set. The contemporary children’s entertainment industry generally makes me want to gouge out my own eardrums. But the Blisters rocked (efficiently) with a set of well-chosen covers (“Blitzkrieg Bop,” “She Don’t Use Jelly,” “Rockin’ in the Free World,” “Sweet Home Alabama”) and a couple of originals. And yes, most of Wilco was in the crowd, beaming with pride. QT: Quaker Oatmeal ad.

• 3:30 – Stars – This where things got really annoying. The biggest problem from Lollapalooza 2005 was the sound bleed from stage to stage. Since they more than doubled the amount of physical space they were using this year, I didn’t think it was going to be a problem. But it was. Bad. Except this year, it was the smaller side stages that were stepping all over the quieter bands on the big stages, especially the Petrillo band shell, or as it’s known in Lolla-land, the “adidas-Champs” stage. Poor little Stars were barely audible over the top of Jeremy Enigk’s bass. I mean, seriously, they had all that fucking room and they still managed to fuck up this seemingly simple logistical dilemma. If it’s going to take you 30 minutes to walk from one end of park to the other, you shouldn’t have to put up with hearing another band’s music drowning out the band you want to see. But Stars pushed through, mostly inaudibly other than several cleverly Canadian quips from their very own version of Fred Schneider. MP3: On Peak Hill (from Nightsongs). 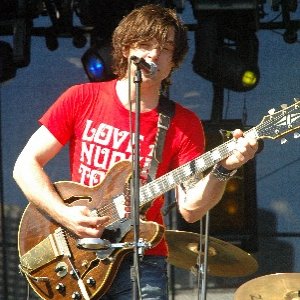 • 4:30 – Ryan Adams – Ryan and I go way back. But lately, he’s been winning me over. This set was a nice, slow-burn groove. It sounded like one long, easygoing, mellow guitar jam. Take it for what it is, but I dug it. It created a perfect festival background for siting on a blanket in the sun, sipping a cold beer out of a plastic cup, and eating smuggled-in Cheez-its. Granted, I left after twenty minutes to walk over to the next stage. So I didn’t have time to get sick of it. But I enjoyed what I heard. And I’m told he covered “Hickory Wind” while I was gone. And a Dead song! Although he might’ve played that when I was still there; they all sounded like Dead songs. MP3: Magnolia Mountain (live in Norfolk, VA). 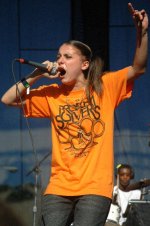 • 5:00 – Lady Sovereign – Johnny Loftus dragged me to Lady Sov’s first-ever show in the States, and she’s become a bit of a star since then, getting signed by Jay-Z and all. So I wanted to see how she’s handling success. All signs point to not very well. When she finally hit the stage, her voice was completely shot. She strained to reach the squealy parts on “Ch-Ching” and failed painfully as her voice cracked and her vocal cords shredded. Why are you yelling like Busta Rhymes, girl? MP3: Love Me or Hate Me (from Public Warning).

Fetal reaction: No kicks. One very firm, angry punch to the lungs though.

• 5:30 – Iron & Wine – When we made it back to the blanket, Ryan Adams was still finishing up, which was great because I think he was playing the same song as when we left. (Not really.) Like Stars, Iron & Wine was rendered mostly inaudible by the beats from the Playstation stage. And then it seems they decided to turn up the volume a bit, and while you could still hear Lady Sov’s bass in the background, once Sam Beam plugged in his electric guitar, it got a lot better. Beam is a mesmerizing frontman, which is a good thing because otherwise this kind of music wouldn’t work at all in an outdoor venue like this. MP3: Woman King. 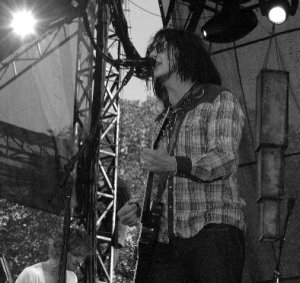 • 6:30 – The Raconteurs – This was my favorite set of Day One. For sure. I’ve seen the White Stripes a couple times before, but I’d never seen Jack White so loose and seemingly happy. He was having a blast, rocking out in his new band. He even offered us free ice cream! The songs from the album all sounded bigger, badder, and more rocking. Seriously, I would have never caught the pun in the band name had I not seen them live: Rock contours, indeed! MOV: Steady, As She Goes video (from Broken Boy Soldiers)

Fetal reaction: Five kicks. Or that might’ve been his mama jumping around…

• 7:30 – Violent Femmes – When I was in junior high, I wanted to go see the Violent Femmes, but my mom wouldn’t let me because she didn’t like the sound of their name. I wish I wouldn’t have waited twenty years. After sonic boom of the Raconteurs, the Violent Femmes just sounded old and wimpy and tired. Which was a good excuse to walk all the way back to the other side of the park. 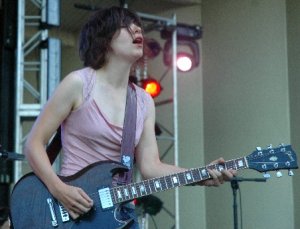 • 8:00 – Sleater-Kinney – This is a band I always stick up for but never listen to. We made it for the last half of the set, and I didn’t catch any sentimentalism or tearful goodbyes. At least not coming from the stage. Which is appropriate, if a little anticlimactic. Just solid fucking rock and roll. MP3: Entertain (from The Woods)

• 8:30 – Death Cab for Cutie – We split after S-K, but caught some Death Cab on the way out. They sounded just like they did at last year’s Lollapalooza. Which is fine. I think Ben Gibbard lost a shitload of weight and grew his hair out though. I got in an argument because I was sure the dude they kept showing on the big screen was Walla because he was skinny and had long hair. I eventually accepted that I was wrong, and that Gibbard must be utilizing Atlantic’s health club, or something. MP3: The New Year (from Transatlanticism)

Fetal reaction: Two kicks. Would’ve liked to stick around to hear more, but too tired…